What do you do when a well known macroeconomics blogger says you have made a claim which you have never made? You have in fact clearly said the opposite, and the claim you are supposed to have made is obviously silly. Ignore it maybe? But then you get comments on your own blog expressing surprise at how you can make such a silly claim. There is only one thing you can do really - write a post about it.

Some background which is important because it makes it clear why this is no simple misunderstanding or mistake. I had been reading stuff about how US growth in 2013 refuted the Keynesian position on austerity. 2013 was the year of the sequester, when many economists had voiced concerns about how a sharp fiscal contraction could derail US growth. Growth in 2013 turned out to be modest, and this led some to argue that this modest growth had refuted Keynesian economics.

So I thought I’d do a simple calculation, discussed here. I took the data series for government consumption and investment (call it G), and computed what growth would have been if we assumed an instantaneous multiplier of 2 and no austerity. If the 2013 experience really did refute the Keynesian position, then my counterfactual calculation of growth without austerity would have given some implausibly large number. I choose a multiplier of 2, because that rather large number would give the Keynesian analysis a real test. I did the same for earlier years. The counterfactual number I got for 2013 growth was 3.7%, rather than actual growth of 2.2%, with similar growth rates for earlier years. Hardly an implausible number for a recovery from a deep recession with interest rates still at zero, so no obvious refutation.

Scott Sumner then wrote a post where he said three things in particular.

(1) and (2) were a rather strange way of saying that I should have used Q4/Q4 growth rather than annual growth. On (3), I wrote a new post simply plotting the data series I had used, which shows a pretty steady fiscal contraction starting in 2011 and continuing in 2013. [1]

Which brings us to his latest post. He writes, about those two original posts:

“He [sic] second claim is to deny that austerity occurred in 2013.”

He goes on to say that this claim is absurd, which of course it is. The only problem is that I never made it, or anything like it. In fact I obviously thought the opposite.

Could this be a simple misunderstanding? There are two reasons why not. The first was that my counterfactual with no fiscal contraction had raised growth from 2.2% to 3.7% in 2013. That would not happen if there had been no austerity in 2013. The second was that I had reproduced the data which clearly shows continuing austerity in 2013! So this was no misunderstanding, or even exaggeration. It is difficult to know what else to call it other than a straightforward lie.

[1] Sumner also says in this latest post that I’m using the wrong variable: rather than G I should use a more comprehensive measure including taxes and transfers, because G is not the variable used to measure austerity in the Keynesian model. But he must know that macroeconomists use both G and some measure of the deficit to look at short term fiscal impacts, for a simple reason. Consumers can smooth the impact of tax and transfer changes, while the impact of G is direct. So equating a $ worth of cuts in G with a $ tax increase, as a deficit measure would do, is wrong: particularly if timing is important, which in this case it is.

So using G is a pretty standard thing to do. In this case, however, it does not seem to make much difference. Here is the IMF WEO series for the US structural deficit. It shows a very similar pattern to G. Austerity starts in 2011, and continues thereafter. 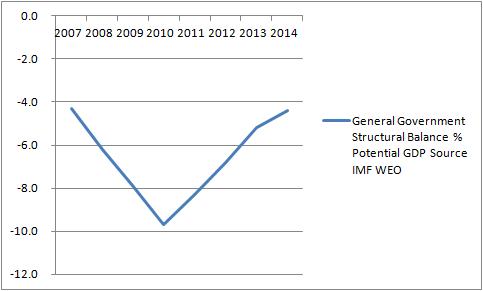 Email ThisBlogThis!Share to TwitterShare to FacebookShare to Pinterest
Labels: sequester, Sumner, US