The Bank of England goes Underground

This is a short post to celebrate an important innovation at the Bank. They now have a blog, which not only has a great name (which those who have not been to London may need a subway map to understand), but looks like being an invaluable addition to the UK and economics blogging scene. As I suggested here, this is another in a long line of small innovations made possible by appointing Mark Carney as Governor. Those who experienced previous regimes can hardly believe it.

The blog promises a mix of posts in terms of both content and wonkishness, and to start we have an easily understandable discussion of the implications of driverless cars for the insurance industry, and a more technical piece on macro. The idea behind the macro post is however fairly simple. If interest rates cannot go below some lower bound, the distribution of forecast outcomes will be skewed. If bad things happen, things will be a lot worse than if good things happen. The novelty is to use what are called stochastic simulations of the Bank’s main macro model to quantify this (using, I have to add, a methodology proposed by one of my former Oxford PhD students – well done Tom). Here is a fan chart for inflation which I think is self-explanatory. 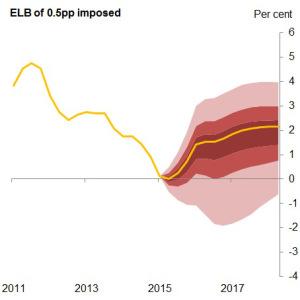 The blog does not discuss the policy implications, but they are pretty obvious. As Brad DeLong has recently pointed out (it’s a point that I and others have also made), with non-symmetrical outcomes like this, you should not choose the policy based on what is most likely to happen. Instead you bias your policy to shy away from the very bad outcomes. So in this case instead of aiming for 2% inflation as the most likely outcome, you aim for a policy where the most likely outcome is above 2%, to avoid a situation where the economy hits the lower bound for interest rates. To put it intuitively, when walking along a narrow path beside a cliff, it is natural and probably wise not to walk in exactly the middle of the path.
Posted by Mainly Macro at 09:05