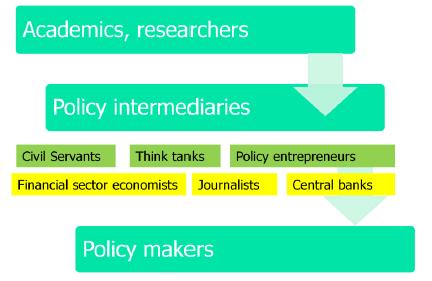 I want to cast the net of potential policy intermediaries pretty wide. Obvious candidates are the civil service and policy think tanks, or the policy entrepreneurs that Paul Krugman has talked about. However to get a full picture of what went on in 2010, I think you need to also think about economists in the financial sector, the media and especially central banks. Of course central banks are policy makers when it comes to monetary policy, but on fiscal policy issues they can  advise governments. As I hope to argue in a later post, their role in misdirecting policymakers after 2010 may have been very important in at least some countries.
Posted by Mainly Macro at 08:07