Inequality under the Labour government

In the last few months I have sometimes been told that the last Labour government did nothing to reverse the rise of inequality seen under the previous Conservative administration. It is a serious charge, given the harm that inequality creates. But it is also incorrect, and here is a nice chart that shows why. 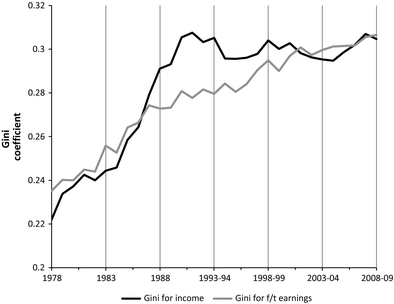 The chart is taken from a paper by Mike Brewer and Liam Wren-Lewis (short summary here). The authors use microdata to explain these divergent trends in the 1990s and 2000s. They find four factors at work.

“First, inequality between those with different employment statuses has fallen, primarily due to a fall in the number of unemployed. Second, employment taxes have played a larger role since 1991 in mitigating the increase in inequality of gross employment income than they did before 1991. Third, investment income has contributed less to total income inequality since 1991, largely due to the decline in its importance as an income source. Finally, a rise in the relative incomes of pensioners and households with children under five – both groups that benefited from reforms to welfare benefits and tax credits during the 1990s and (especially) 2000s – has pulled inequality down. Overall, since 1991 these four factors have almost entirely offset the impact on income inequality of the inequality-increasing changes in the distribution of earnings and self-employment income.”

Some of these factors may not have owed much to government policy, but others clearly did. The bottom line is that the last Labour government did quite a lot to reduce inequality. Only once you recognise that can you be realistic about what it would take to do more. Here are some ideas from Tony Atkinson, and I personally would be even more radical in one particular area.
Posted by Mainly Macro at 08:37