I have always felt that the British were slightly obsessed by anniversaries, particularly if it involves anything to do with the two world wars. It seemed unhealthy, perhaps encouraging beliefs that should have died with our empire. And perhaps more generally it encourages an unhealthy nostalgia.

One of the clear dividing lines in the EU referendum between those voting Leave and those voting Remain was how they felt about the past. Asked if life in Britain was better or worse than it was 30 years ago, those voting Remain had a 46% balance saying better, while Leave voters had a 16% balance saying worse. While those on the left tend to see this as a protest by a working class left behind by de-industrialisation, it was also a protest by social conservatives who like to think of England as cricket on the village green.

The Brexit vote takes us back not to the 1970s when we joined, but back to the 1950s. Britain first tried to join the EU in 1961, but was rebuffed by De Gaulle in 1963. Theresa May’s call for the return of Grammar schools (selection into different schools at the age of 11) also takes us back to the 1950s. One of the major achievements of the Labour government of the 1960s was to largely phase out selection at 11.

The pretext May uses for reintroducing grammar schools is that it will help increase social mobility. The evidence is clear: it does not. A few local authorities did manage to retain grammar schools, and the evidence from them is also clear. The following graph is taken from a post by Chris Cook. 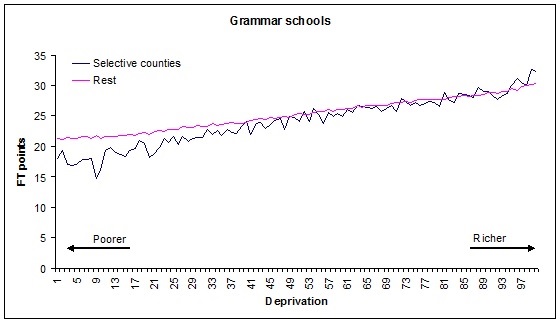 FT points are a measure of educational attainment. The graph clearly shows that while the very rich might do slightly better in areas where grammars remain, the poor do very much worse.

In short, reintroducing grammar schools is simply reactionary. We are going back to a time where class divisions were far more entrenched than they are now. It is possible that this can be avoided, but it requires those in the Conservative party who prefer living in this century to the last to say no to their Prime Minister. They could not stop the UK voting for Brexit, but they can stop this.