A response to Gudgin, Coutts & Gibson

The authors have a post on the Prime website in which they, among other things, respond to two blog posts of mine where I mention their work on Brexit. In the first post they mention [1], I use a graph from their paper to illustrate how important the Single Market was for UK exports. Here is the graph. 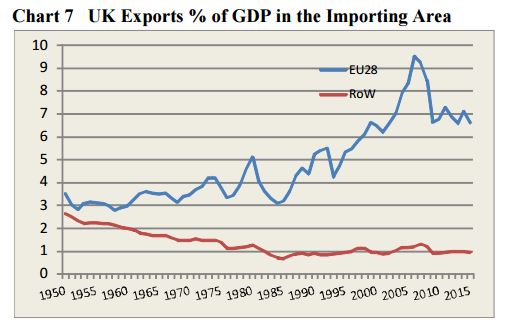 “But didn’t the CBR report say that the benefits of the Single Market had been exaggerated by the Treasury? Yes it did. Here is some of its reasoning. That growth in UK export share after the Single Market is not as impressive as it looks, because there is an underlying 6% positive trend in the share, which you can detect before we joined the EU. That looks pretty on a picture, until you realise it is nonsense. A 6% trend rise in an export share will imply that at some point not too far away UK exports to the EU will be as high as total EU GDP. UK exporters are just not that much better than exporters in other countries. There is no underlying trend rise in the UK’s export share.”

By export share, it is obvious that I’m talking about share in destination GDP, as in the chart. In my paragraph there is an error. I used a 6% figure rather than the correct 3.5% figure for their trend in export penetration relative to the non-EU penetration. It was a particularly stupid error, because just below Chart 7 is Chart 8, which contains the correct figure. 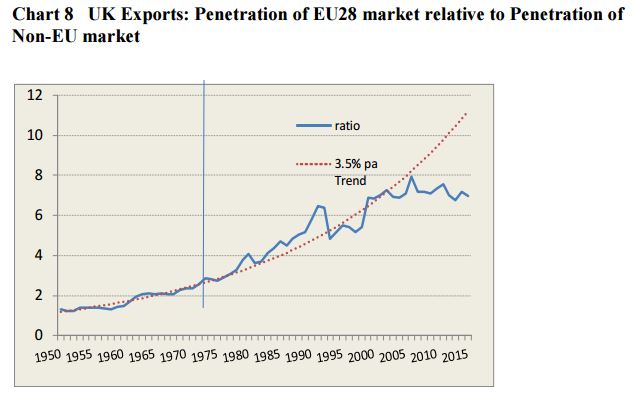 But, as the authors must know, this error is not important to my argument. Replace 6 by 3.5 in the relevant paragraph and it still makes perfect sense. What I was criticising was the notion that there was any substantial underlying trend in export penetration, and that the impact of EU membership should be judged relative to that trend. You can see from this chart how ludicrous a 3.5% trend is: it implies that without EU membership the UK exports share would be now above 10% and rising fast. This trend seems to be an important part of their judgement that UK export penetration relative to the EU would fall by substantially less than the Treasury assume in their analysis. The trend makes no sense, unless the aim is to make the impact of EU membership look small.

So what is the authors’ response to my basic criticism in their Prime piece? There is none.

As far a the 6 rather than 3.5 is concerned, it is also odd is that this is the first time they have mentioned the error to me. The post was from mid-January, and I would have happily changed 6 to 3.5 if they had pointed it out to me earlier.

The second post was a discussion of the notion of ‘fake economics’. I said fake economics could be described as “economic analysis or research that is obviously flawed but whose purpose is to support a particular policy.” or “We can equally talk about evidence based policy and its fake version, policy based evidence.” Here is what I wrote in full about their study in that post.

“The CBR analysis is less obviously fake. However Ben Chu has gathered the views of some academics who are experts in trade theory, including Richard Baldwin (who has just written a definitive and widely praised book on the ‘new globalisation’) and Alan Winters, both hugely respected with immense experience, who pour some very cold water over the study.”

How do the authors respond to this second post in the Prime piece. They write

“It is unusual for Wren-Lewis to rely uncritically on mainstream economists, but he was willing to do so in this case. With many of Wren-Lewis’ articles being used by one of us in economics teaching to encourage students to query and to test what is considered ‘mainstream’ it seems more than a little surprising to be discredited for daring to do so.”

This is wrong in many ways. First, I was not relying on others, as I had serious misgivings about their use of trends that I outline above. Second, I made no mention of ‘mainstream’ and heterodox anywhere, so any suggestion that this was behind what I wrote is their invention. Finally, there is no problem with anyone challenging anyone else.

Let me reproduce one of the quotes from Ben’s piece

“The HMT [Treasury] use of gravity model was perfectly in line with best practice. It was classic evidence-based policy analysis”, said Richard Baldwin, Professor of International Economics at The Graduate Institute of Geneva. Professor Baldwin went on to accuse Mr Gudgin himself of engaging in “policy-based evidence making” and “using evidence the way a drunk uses a lamp post – for support, not illumination”.

So Richard Baldwin was accusing the authors of exactly the fake economics that I talked about. Given my suspicions about their treatment of trends discussed above, I felt justified in writing about their piece in this context.

I could have ignored Richard Baldwin’s criticism and my own suspicions, and not included them in this post. But here is another quote from Ben’s piece:

“Dr Graham Gudgin of the CBR criticised the Treasury’s analysis, which predicted a major hit to the UK economy by 2030 if the UK experienced a “hard Brexit”, in unusually strident terms describing it as “very flawed and very partisan”. Dr Gudgin said he “suspected” Treasury civil servants had been leaned on by ministers to produce the results David Cameron and George Osborne wanted.”

Recall that the Centre of Economic Performance argued, based on their own extensive analysis, that the Treasury had underestimated the costs of Brexit, so presumably the accusation of ‘very flawed and very partisan’ applies to their analysis too. If one of the authors was happy to argue that the analysis of others had been designed to produce certain results, I felt it only fair to ask the same question of the authors.