The only two lectures on Oxford’s core undergraduate macro course that I still teach, and which I have just taught, are the last two on fiscal policy. I use the privilege of the last lecture to end on a reflective note. I acknowledge that macro rightly got a lot of stick by largely ignoring the role of finance, but I also point out that the poor recovery has involved a vindication of the core macro model: austerity is a bad idea at the ZLB, QE was not inflationary and interest rates on government debt did not rise but fell.

So far so familiar. But I end by showing them my this chart. 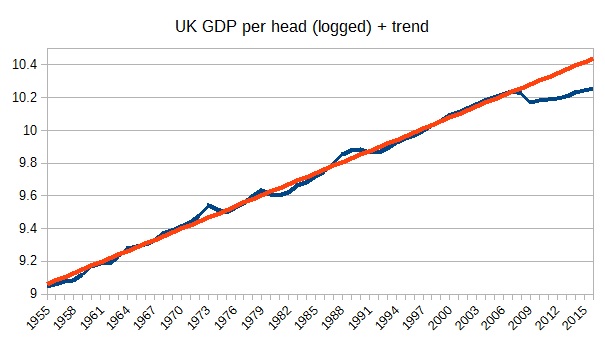 And I say that we really have no idea why there has been no recovery from the Great Recession, so there are plenty of mysteries left in macro. The puzzle is sharpest in the UK because the pre-crisis trend is so stable, but something similar has happened in most places. I think it is a suitable note of humility (and perhaps inspiration) on which to end the course.

A mechanical way to explain what has happened is to bend the trend: to suggest that technical progress has been slowing down for some time. This inevitably means that the pre-crisis period is transformed into a boom. I have been highly skeptical about that story, but I have to admit part of my skepticism comes in part from traditional ideas about what inflation would do in a boom.

However another explanation that I have always wondered about and which others are beginning to explore is that perhaps we remain in an extended period of demand deficiency. Keynesian theory is very suggestive that such a possibility could occur. Suppose that firms and consumers came to believe that the output gap was currently zero when it is not, and that they erroneously believed that the recession caused a step change both in potential GDP but also possibly its growth rate. Suppose also that unemployed workers priced themselves into jobs by cutting their (real) wage or disappearing by no longer looking for work. The former could happen because firms could choose more labour intensive production techniques: scrapping the car wash machine for workers with hoses.

In that situation, how do we know that we are suffering from demand deficiency? The traditional answer in macroeconomics is nominal deflation: falling wages and prices. But because workers have already priced themselves into jobs, nothing more will come from the wages route. So why would firms cut prices?

If the pre-crisis trend still applies, it means that there are a large number of innovations waiting to be embodied in new investment. With this new more efficient capital in place, firms would either increase their profits on selling to their existing market or try to expand their market by undercutting competitors. We would get an investment led recovery, accompanied by rising productivity and perhaps falling prices.

But suppose the innovations are just not profitable enough to generate an increase in profits that would justify undertaking the investment, even though borrowing costs are low. Maybe a far more dependable motivator for embodied technical progress to take place is the need to satisfy an expanding market. The firm needs to install new capacity to satisfy growing demand for its product, and then it is obvious to investment in equipment that embodies new innovations. The accelerator remains a very successful empirical model of investment. (On both points, see this discussion by Caballero.) But if beliefs are such that the market is not going to expand that much, because firms believe the economy is ‘at trend’ and trend growth has now become pretty small, then the need to invest to meet an expanding market largely goes away.

This idea goes right back to Keynes and animal spirits of course. Others have more recently reformulated similar ideas, such as Roger Farmer. This is a little different from the idea of adding endogenous growth to a Keynesian model, as in this paper by Benigno and Fornaro for example. I’m assuming in this discussion that potential output has not been lost, because innovation has not slowed, but it is simply not being utilised.

It is this possibility which is the reason that I have always argued central banks and governments should have been much more ambitious about demand stimulation after the Great Recession. As I and others have pointed out, you do not have to attach a very high probability to the scenario that demand will create supply before it justifies a policy of ‘testing the water’ by letting the economy run hot. Every time I look at the data above, I ask whether we have brought this on ourselves by a combination of destructive austerity and timidity.