As I have noted before, it is one of the great ironies of UK politics that recent growth only looks respectable because of immigration. Because mediamacro does not connect dots, politicians can get away with talking about a solid UK recovery, even though it is only half respectable because of the immigration they say must be reduced. But large migration flows are not just a UK experience.

The focus on GDP rather than GDP/capita distorts international comparisons as well. I conducted a small twitter poll (something over 500 votes) asking which of these 4 countries had grown most rapidly from 2006 to 2015: Germany, Japan, UK and US. Now those who voted are by self-selection well informed about economics, but over half chose the wrong answer in a comparison where the winner is ahead by a mile. Here is a chart (using IMF data). 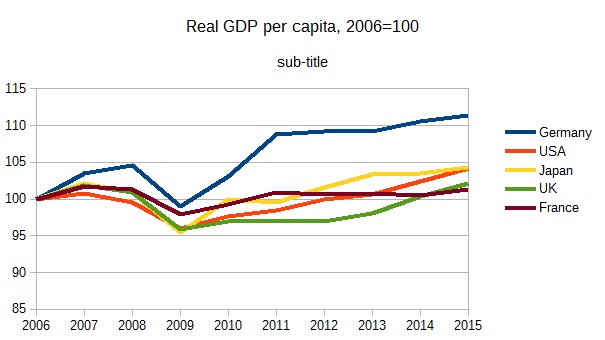 I suspect the main reason why less than 50% chose Germany is that we are so used to GDP comparisons, and both the UK and the US experienced large scale immigration over this period. Using GDP the US wins (with 12% growth), closely followed by Germany (10.5%) and the UK (9.5%) with Japan way behind at 3.5%. But both the US and UK numbers are hugely flattered by immigration.

Why did Germany do so well in terms of the average living standards of its people? We need to talk about demand and supply. As readers should know, Germany suffered from austerity just as the US and UK did. But as you should also know, this was compensated for by a large competitive advantage it had gained over its fellow Eurozone members because of slow wage growth from 2000 to 2006. Strong growth in net trade made up for austerity, leading to a comparatively strong output per head performance (and, going with that, a huge current account surplus).

How was this demand boost met in terms of increased supply? Not through more rapid productivity growth (measured in terms of output per employed person), which hardly increased over this period. Instead it was through an amazing decrease in unemployment. In 2006 the unemployment rate in Germany was 10%, whereas by 2015 it was less than 5%. This in turn reflects the Hartz reforms, discussed by Tom Krebs and Martin Scheffel here. As they point out, this reform created losers (in terms of risk, particularly) as well as winners in terms of average income per head.

All this emphasises the point that GDP figures can be a poor guide to growth in average incomes. It also puts into perspective claims by Conservative politicians, widely repeated by the media, that the UK has been doing better than everyone else. Over this reasonably long period (you can always cherry pick short horizons), Germany has clearly been doing better than anyone else among the major countries, with growth from 2006 to 2015 of over 11%. Next come a group of countries at around 4% growth, including the USA and Japan as well as Sweden and Switzerland. Below them is another group of around 2% growth, including the UK, Ireland and the Netherlands. Just behind at 1% is France and Belgium.

The UK is certainly not at the bottom of the league, with a number of countries with GDP per capita in 2015 still below 2006 levels. These include Spain, Portugal, Finland and Denmark, with really poor performances from Italy and Troika run Greece. But growth of even 4% over 9 years is nothing to be proud of. Among all these countries, only Germany can claim to have actually recovered from the recession. [1]

[1] Outside this established group, we have seen strong growth from Australia, Israel, and the Czech and Slovak republics, as well as some smaller countries.
Posted by Mainly Macro at 10:28