The Bank are warning of imminent rises in interest rates. As Chris Giles points out, we have been here before, and before that, but that shouldn’t mean we should dismiss this talk, because one day it will happen. [1] They (the MPC) certainly sound serious. But why when current growth is so slow are they even contemplating it? Here is a clue from Mark Carney’s latest speech (my italics).

“On the supply side, the process of leaving the EU is beginning to be felt. Brexit-related uncertainties are causing some companies to delay decisions about building capacity and entering new markets. Prolonged low investment will restrain growth in the capital stock and increases in productivity. Indeed, if the MPC’s current forecast comes to pass, the level of investment in 2020 is expected to be 20% below the level which the MPC had projected just before the referendum. Net migration has also fallen by 25% since the Referendum.

As a result of these factors and the general weakness in UK productivity growth since the global financial crisis, the supply capacity of the UK economy is likely to expand at only modest rates in coming years.”


When people, like me, say how can the Bank be thinking of raising rates when demand is so weak, the response from the Bank would be that supply has been at least as weak.

This pessimism about the supply side comes straight from the data. If I hear people talking about the UK being a ‘strong economy’, I know they either have not seen this chart or are just lying. 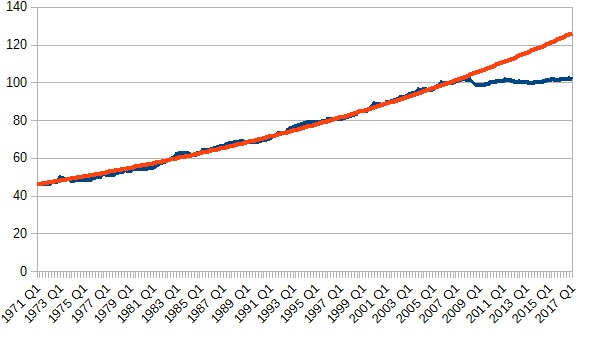 The red line is a trend that pretty well matches the trend in the data until the end of 2007, with the amount you can produce with an hours worth of labour increasing by 2.2% a year. Since the global financial crisis (GFC) there has been almost no growth at all. If you want to know the main reason real wages have stopped increasing, this is it. [2]

I hear some people say this is just oil and financial services. It is not, as this table from a recent Andy Haldane speech shows. Start at the bottom: total average growth has been non-existent since the crisis. The rest of the table looks at the contribution of each sector to that total. To see what productivity growth would be excluding financial services, just add that figure to the total: 1.8% 1998-2008, 0.4% 2009-2016. That table makes it clear that the productivity crisis is economy wide. 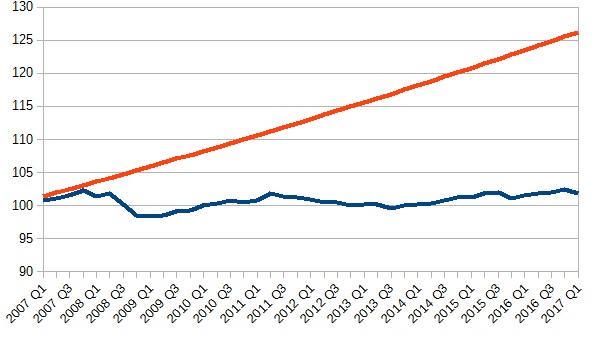 We could describe this data as five phases. 1) Productivity in the recession fell, as it often does in a recession for various reasons. 2) As the economy begins to grow again, so did productivity growth. 3) As it becomes clear, in 2011, that the ‘recovery’ is going to be very weak because of austerity, productivity growth stops growing. 4) By the end of 2013, with stronger growth under way (although still no catch up to previous trends, so not a true recovery) productivity starts growing again, although rather slowly. 5) Since the 2015 election, with the prospect and then the reality of Brexit, even that modest growth disappears. (My data does not include 2017Q2, which saw a very slight fall.) I could shorten the description as follows: recession, modest optimism, pessimism, even more modest optimism, uncertainty.

That is my gloss on the numbers, but I’ve done it to make a point. Productivity growth invariably requires an investment of some kind. It may not be physical investment, but just training someone up to be able to use some new software. Whether a firm incurs that cost will depend, in part, on their expectations about the future. There is a regrettable tendency in macro (I blame RBC theory) to treat productivity growth as manna from heaven. But the idea that potential improvements in technology stopped after the GFC, and just in the UK, is simply ridiculous. The problem is that firms are not investing in new technology. What I call the ‘innovations gap’ has emerged in the UK because of weak growth and the consequent pessimistic expectations of most firms. [3]

The idea that the economy could get itself in a low growth expectations trap is increasingly being put forward by economists: here is George Evans, for example. The UK has got itself into that trap because on the two occasions that a recovery of sorts appeared to be under way, the economy has been hit with terrible policy errors (austerity and Brexit). But the idea that UK firms are incapable of upgrading their production techniques is nonsense. They will do so initially if they can be confident that the demand for their products will increase, or subsequently when the innovation pays for itself even though demand is flat.

Which is why an increase in interest rates right now would be very bad news. It would confirm the pessimistic expectations of most firms that demand is not going to grow fast enough to make innovation worthwhile. Formally, the job of the MPC is not to worry about productivity but to control inflation. But elsewhere, where the same process may be happening to a lesser extent (the productivity slowdown is worldwide, just most acute in the UK), central banks are puzzled at why inflation just refuses to rise.

The concept of an innovations gap is one solution to that puzzle. Expanding demand allows firms to invest in more productive techniques, and so there is less incentive to choke of demand by raising prices. I suspect in an alternative world where Brexit had not happened the Bank of England would also be puzzling over why prices were not rising. As a result, if the MPC do finally raise interest rates this year, it would be one more mistake to add to the growing list under the heading Brexit.

[1] On each occasion I also wrote a post saying that they should not raise rates, starting I think at the beginning of 2014.

[2] I discussed in earlier posts why real wages are falling by even more than output per head.

[3] Or perhaps the pessimism of the bank manager lending money to those firms. The Haldane speech shows that productivity growth has remained strong among the top, frontier companies. Why? Because these companies, given their position, will be seeing growth relative to the average, and have got to the frontier through a culture of innovation.