In a footnote in a recent post, I noted the recent controversy over a BMJ paper relating changes in the English mortality trend to austerity, and in particular cuts in NHS and social care spending. With the journal’s blog headlining the paper as saying “Health and social care spending cuts linked to 120,000 excess deaths in England”, headlines in the press were inevitable. The BBC decided, however, to ignore the study, based (in part?) on advice from the Science Media Centre (SMC). One look at who funds that centre (and putting aside bodies like the Medical Research Council!), and a conspiracy was born.

Was the SMC’s advice correct? Here is a chart from the paper that allows me to explain the basic idea behind it. (The latest ONS data on mortality for the UK is here.) 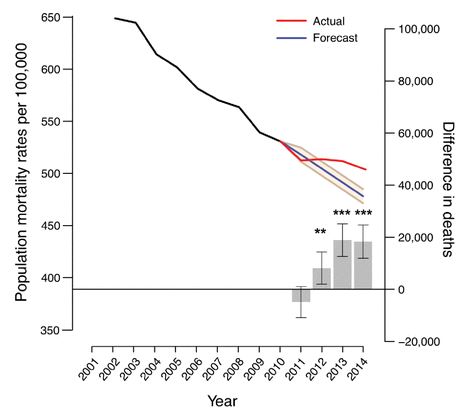 The vertical axis is the mortality rate (see the paper for the exact definition). Since 2001 it has been declining over time. The blue line is what extrapolating that trend would imply. However, as the red line shows, since 2012 the mortality rate has flattened off. We could call the difference between the actual and the trend line excess deaths, which are the grey bars. Further analysis by the authors showed that these excess deaths occurred in the over 60 age group.

This description should I hope immediately show the potential fragility of the results. Calculating the number of excess deaths relies on assuming a simple trend decline in mortality which may not be realistic. Even if it is, there are many other possible causes for these excess deaths, and the authors were only able to test for a small number. The number of data points is not large.

One obvious way to try and see how speculative this analysis is would be to look at other countries over this period. Has there been a similar levelling off in mortality rates? What follows comes with a huge health warning (forgive the inevitable pun): I am a complete amateaur at handling data of this kind. Because data for the UK is more immediately available to compare to other countries, I will look at the UK rather than England.

Using data from the World Health Organisation, we can indeed observe mortality (defined simply as deaths divided by population) in the 75+ group actually increasing between 2009 and 2013 in France as well as the UK, but decreasing in Germany and Norway. (The reason for the choice of countries will become clear.) Among the 55-74 age group, there were declines of a similar size in all four countries.

Unfortunately we really want to focus on the 65+ group. Another way of looking at this issue is to examine data for life expectancy. The OECD produce this data at age 65. Obviously if mortality rates level off, so does life expectancy. If we look at the UK, we can do something similar (although rather simpler) to the analysis from the BMJ study shown above. 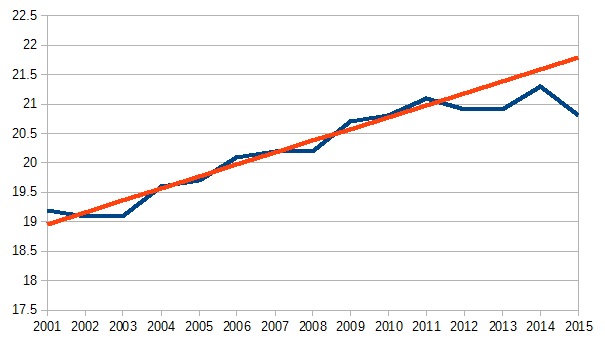 We can see that actual life expectancy at 65 for women (the blue line) was increasing from 2001 until 2011 (the red line is a trend over this period), but has subsequently levelled off, much as the mortality rate does in the BMJ study. A similar pattern occurs for men, although the actual numbers are lower throughout (unfortunately).

Has the same levelling off happened in other countries? Which other countries should we compare the UK to? We have two problems. First, mortality and therefore life expectancy is related to geographically specific factors, like average winter temperatures or local flu epidemics. It therefore makes more sense to compare the UK to France than Australia, say. Second, many other countries embarked on austerity besides the UK. In the chart below I plot actual life expectancy for women at 65 in the UK (as above), France, Germany, Norway and Denmark. (Again the analysis would be similar for men.) 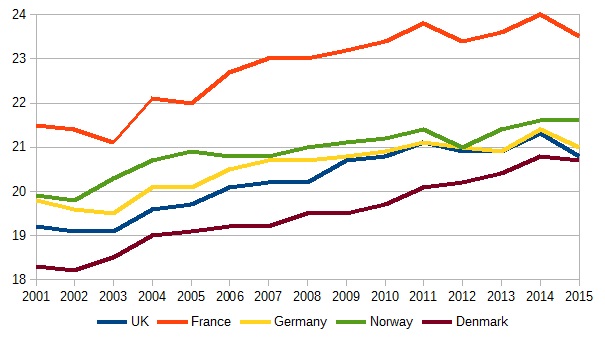 One thing I did not know until I did this analysis was how much higher French life expectancy is. Yet as you can see from the red line, it too has levelled off since 2011. That could be because expectancy is so high, it could also be because French people also experienced austerity, or because of some other unexplained factor. Austerity in Germany was more modest than in France, and perhaps by coincidence the recent levelling off (the yellow line) is more moderate compared to its previous trend. One country that had no austerity was Norway. As the green line shows any levelling off in the rise in life expectancy since 2011 has been small. The rise in life expectancy in Denmark (where again there was no austerity until 2013) did not change after 2011, but maybe that involves some catching up.

I admit it is difficult to visualise trends on a chart with so many lines, so I have done one for another country that has data very similar to Norway and experienced no austerity, which is Sweden. 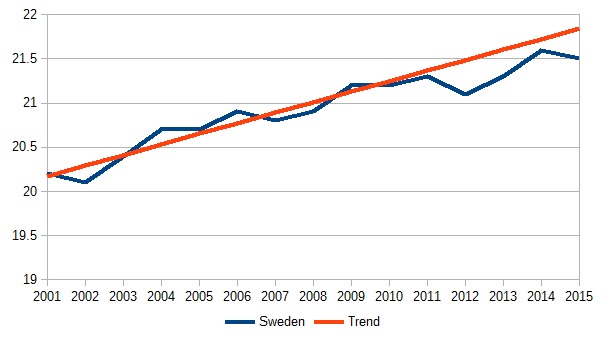 The trend, as with the UK above, is estimated from data beginning in 2001 and ending in 2010. As we can see, actual life expectancy does appear to deviate from trend in a downward direction from 2012 onwards, just as it did in the UK. The difference is that whereas life expectancy is still rising after 2011 in Sweden, in the UK it is flat. The gap between the trend line and actual in Sweden is just 0.3 years, but in the UK it is almost one year.

Thus the two of this group of countries that have experienced a complete levelling off in life expectancy are France and the UK. Is this because both have experienced significant austerity. As far as health expenditures are concerned, the answer is no, as the chart below shows. For comparability I've shown the data relative to a trend for the 2001-10 period. 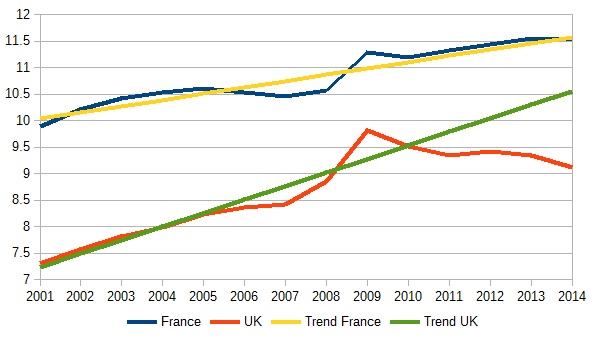 All this suggests that there has been in many neighbouring countries some decline in the rate at which life expectancy has been rising since 2011, but only France and the UK have seen no rise in life expectancy since 2011. French life expectancy was already very high, so perhaps some levelling off was inevitable. Or alternatively there is some missing factor that explains the levelling off in life expectancy in France and the UK. One final statistic, to show that my choice of countries has not been rigged. If we compare life expectancy for women at 65 in 2015 to 2011, among all the OECD countries only one has seen a (slightly) bigger fall than the UK, which is Austria. The only country with the same decline as the UK is France. The real message is that this is an ideal area for some proper research using proper econometrics on a wider sample of countries.

I want to end by making a more general point. Linking austerity to health is nothing new. In this post from 2013 I talked about the work of David Stuckler and others. He has a recent paper with coauthors on the health impact of Brexit in the Lancet. As Danny Dorling explains in this excellent verbal account of the UK data in the LRB, there have been a number of studies linking excess deaths to austerity before the one discussed above. You would think that a combination of the data and these studies would prompt the government to at least investigate what is happening, but they have so far done nothing. Perhaps they know what the result of any investigation would be.

To see why this is such a sensitive topic for the government, you only need to look at a recent Question Time (9 minutes in) where Aditya Chakrabortty talked about government policy leading to deaths. It is one thing for economists like me to say that austerity has cost each household at least £4,000: this can be dismissed with ‘what do economists know’? But when doctors say the policy has led to premature deaths, that is something else. If I was being cynical, I would say it is no surprise that the BBC did not want to have anything to do with this study.