Should Labour be doing better?

To anyone who cares to look, the Conservatives are doing terribly at the moment. The most important area is Brexit, of course, where through simple incompetence they may fail to move the negotiations on to their second stage this year. But there are plenty of other disasters that would be getting a lot more coverage in the absence of Brexit, such as the Universal Credit rollout.

With such a poor performance you might think that Labour should be making even more headway in the polls. Here is Britain Elects poll tracker 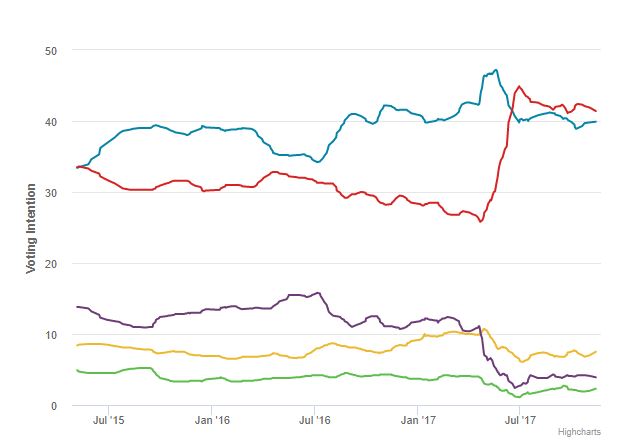 Some are already suggesting that Labour have hit some kind of limit to their support, as a result (of course) of Jeremy Corbyn’s leadership.

If you are going to tell any kind of convincing story about what the polls mean you have to start by explaining the Labour surge in the few weeks before the June General Election. There is a lot of important detail, and no one does this better than Steve Richards. But important as all this is, there is something rather big that is missing. Pretty well any Labour party member will tell you this, and they are right. A central reason why Labour rose by so much so quickly is that they got to talk to the electorate directly, missing out the mediation of the media commentariat. [1]

The way I like to think about this came originally from a paper written in 1967 by the sociologist Frank Parkin, who was trying to explain the ‘paradox’ of working class Conservatives. The dominant culture, he argues, is small c conservative, and so any radical politician like Corbyn is automatically at a disadvantage. This dominant culture, of which the media is a key part, can be challenged by institutions like trade unions, but it also loses much of its hold in a General Elections, where politicians are given unprecedented access to voters, and equally important voters are unusually attentive. I have stressed the importance of the media in many contexts (such as mediamacro), I argued this is what was happening as the polls started to move before the result, and again after the result.

Of course this alone did not guarantee that Labour would do as well as they did, or indeed whether someone from the centre left might have done better still. In Heather Stewart’s excellent ‘long read’ account of Labour’s popularity transformation in the 2017 General Election (GE), she writes

“In that moment – as the exit poll showed Labour stripping Theresa May of her governing majority – this ragtag band of ideologues, who had spent much of their lives fighting on the fringes of British politics, became a government-in-waiting. Corbyn, a 200-1 outsider for the Labour leadership less than two years earlier, sat on his sofa wondering whether he was about to become Britain’s next prime minister. A hung parliament was one of the scenarios his close team of advisers had planned for, but it was at the upper end of their expectations. They hugged each other – but they didn’t believe it yet.”

After the election it was Corbyn, not May, who enjoyed the winner’s honeymoon, and Labour overtook the Conservatives in the polls, peaking at the end of June. But after that politics returned to normal, or as normal as they can be in this Brexit period. Labour’s poll rating began to fall away very slowly, as you might expect with the media now filtering the news that most people see. [2]

Anthony Wells of YouGov directly addresses the question posed in the title of this post here. He points out that many voters are just unaware of issues like Patel’s resignation, and so may not see the full extent of the government’s self-inflicted problems. He also reports a YouGov poll that asks Tory voter why they support the Conservatives. Around half said they supported their aims, even though they were struggling to deliver them. 22% said that they were competent, even though they didn’t agree with all their aims. 19% said that they didn’t agree with their aims and that they were not governing well, but that they were better than Corbyn’s Labour. Is that 19% high or low? No comparative figures from earlier times are offered. Is it surprising, given the treatment of Corbyn by the right wing press? Does that mean that Corbyn is a barrier for Tories switching? - it may, or it may not. Does it mean that Labour have hit some kind of plateau of support? Of course not: the 19% may still be persuaded, and the 22% that somehow think this government is competent are low hanging fruit.

But what about Brexit. As Jolyon Maugham reminded me, public support for the government’s handling of Brexit has plummeted. Why isn’t Labour picking up support as a result of this? YouGov asks a regular question about particular issues, and which political party would handle them best. After the election 34% said the Conservatives would handle Brexit best, but that had fallen to 26% by October. Yet the equivalent percentages for Labour were 20% and 18%. In other words the government’s bad Brexit performance is hurting the Conservatives, but not benefiting Labour. If you look at the parties that have benefited from the fall in those thinking the Conservative party are best at delivering Brexit, they are UKIP (why haven’t we left yet), the LibDems (Leave regretters), and most of all None/Don’t Know (haven’t a clue).

This does seem to point to a weakness in Labour’s approach. The line to take, given Labour’s Brexit strategy, is the one that Corbyn has used: the government’s internal divisions and the Brexit hardliners are destroying the chance of a successful negotiation with the EU. But that message is not getting across. I personally do not see why Corbyn should be a problem in that respect. But with more fallout over Brexit very likely in the near future, this looks like an opportunity Labour are missing.

[1] To be fair, Steve Richards does touch on this in talking about how commentators, and many Labour MPs, underestimated Corbyn’s ability to campaign in a General Election.

[2] Here is just one example. How many saw the results of this medical study reported on BBC news? It took me less than a hour to read the study. The basis for the analysis can be questioned, as the authors acknowledge, but given the political controversy around similar claims on Question Time the decision not to cover the report looks very odd. To hide behind the assessment of an outside body that itself has been the subject of controversy (see here and here) seems very naive.
Posted by Mainly Macro at 10:11