Last week’s rise in UK rates has been extensively analysed (see for example Tony Yates here) so I will be very selective. First, the justification for the title of this post is provided by an extract from the inflation report:

“The overshoot of inflation throughout the forecast predominantly reflects the effects on import prices of the referendum-related fall in sterling. Uncertainties associated with Brexit are weighing on domestic activity, which has slowed even as global growth has risen significantly. And Brexit-related constraints on investment and labour supply appear to be reinforcing the marked slowdown that has been increasingly evident in recent years in the rate at which the economy can grow without generating inflationary pressures.”


The last sentence is particularly important: in plain language it is saying that Brexit is contributing to lower trend productivity growth, which the Bank now put at 1.5% compared to a pre-recession level of 2.25%. The wording is chosen carefully: they are not talking about uncertainty effects, but permanent effects from a likely deal. So last year worries about the demand side effects of Brexit led the Bank to reduce rates, and now concerns about the supply side effects of Brexit are contributing to higher rates.

Whether these modest increases in interest rates continue, as the Bank are signalling, should largely depend on whether the pickup in earnings growth they anticipate actually happens. As Torsten Bell from the Resolution Foundation argues here, the set of information that might justify the Bank’s expectations of an imminent recovery in earnings growth is not empty, but nevertheless many economists regard it as a brave forecast.

However the labour market is not the only reason the Bank is raising rates. Putting labour market issues aside, they think that because firms are operating with little ‘spare capacity’, any large increases in demand will be met by firms raising prices. Ergo the Bank’s job is to use higher interest rates to stop demand rising too fast. I think this is conceptually wrong, because it underestimates the role that demand and expectations about demand play in determining investment decisions.

A firm can meet rising demand in three ways: by investing in more productive processes, by raising prices or by using more of its spare capacity. In a traditional economic upswing firms first use spare capacity, then invest, and when capacity utilisation is at a peak and there are no profitable investments to make it raises prices. At that point it is right for a central bank to step in to moderate demand growth.

This has not been a typical recovery from a recession. Firms have used up spare capacity, but have not invested in more efficient processes. This is what measures of capacity utilisation suggest (taken from an earlier Bank of England Inflation Report). 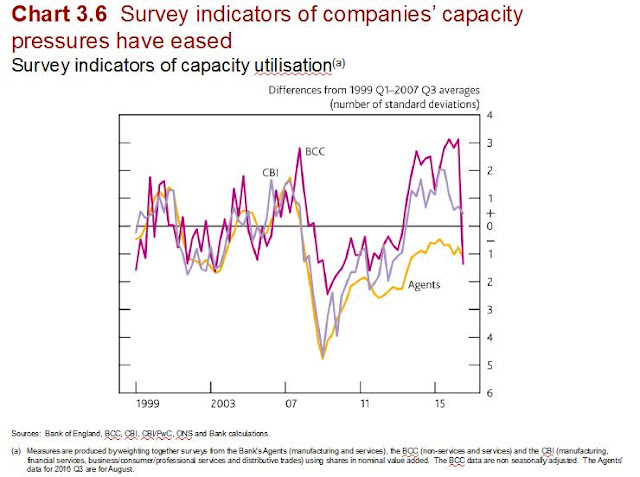 If you just take these surveys as measuring the state of the cycle (and if we ignore the Bank Agents) since 2013 the economy has been experiencing an economic boom. Yet from 2013 core inflation has been below target and falling. You can resolve this paradox by thinking about firms acting unusually, by failing to invest and meeting additional demand by utilising capacity as if they are in a boom The result of that is stagnant productivity growth.

The conceptual error is to read these capacity utilisation numbers as indicating that there are no profitable investments to make. We know these profitable investments exist, because leading firms are improving their productivity.* What we have is an innovations gap, where lagging firms are not copying leading firms and are instead holding back on investing. We do not know why they are holding back, but one obvious reason is they have expectations of low future growth and/or high uncertainty about this growth. Empirical evidence shows the strongest determinant of investment is output growth, and the obvious rationalisation for that ‘accelerator effect’ is that current growth influences expectations about future growth.

If this is right, increases in demand will be met by firms finally coming off the fence and investing, rather than raising prices. But if the central bank starts raising interest rates to choke off demand, even when it is growing slowly by historical standards, it will validate the pessimism that has been holding back investment and productivity will continue to stagnate. There is a very real danger that the Bank may be playing its part in a self-fulfilling low growth recovery.

*Postscript (8/11/17) Discussion here by Berlingieri et al shows this growing divergence between leading and lagging firms is a global phenomenon.
Posted by Mainly Macro at 09:45