Another lesson of the GFC unlearnt: the Consensus Assignment is dead

Martin Sandbu recently responded to critics of an earlier piece of his arguing that central bankers could and should have done more to tackle the aftermath of the Global Financial Crisis. I stress aftermath here, because I have no doubt that central banks (including the Bank of England) were culpable in both ignoring warning signs before the crisis, and in the UK and Eurozone not reacting quickly enough to the consequent recession. (It is extraordinary that on the MPC only Danny Blanchflower understood what was going on, and I would argue that part of the reason for this was the primacy of the inflation target.)

In the UK and US I do not buy the argument that no further stimulus was needed. 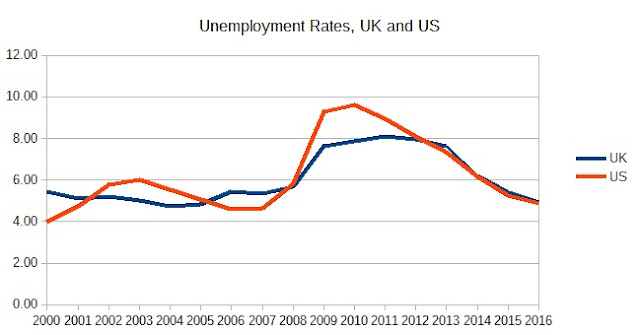 UK unemployment rose from around 5% to around 8% in 2008/9, and stayed at that level until it began coming down in 2013. US unemployment was also above 8% until 2013. Both economies needed more stimulus in 2009, and in its absence in 2010 and so on. To think otherwise means you are placing too high a weight on temporary changes in inflation and too low a weight on the costs of the recession.

Where I think I might disagree with Martin is that this stimulus could have reliably come from monetary policy. A good policy instrument is one that has a reliable impact on demand, and the only reliable monetary policy instrument that fulfills that criteria is short interest rates. Central banks could have done more QE, or they could have reduced rates below the Effective Lower Bound (ELB), but they wouldn’t have known how much to do. They might have got there in the end, but extra years of unemployment and probably a permanent hit to output through hysteresis were an avoidable cost.

The biggest mistake central banks made was not to recognise this and be honest with the public. They should have said, clearly and repeatedly, that once rates hit the ELB monetary policy was no longer the most reliable instrument to stabilise the economy, and fiscal policy should be used. This does not break any implicit concordat about not commenting on fiscal policy (which most central banks break anyway), because the statement is about a delegated authority being honest with the public about whether it can reliably do its job..

The fact that central banks in the UK and Eurozone didn’t do that may reflect dishonesty or it may reflect negligent ignorance. The fact that options like QE existed may have allowed central banks to convince themselves that they could still do the job assigned to them, and it discouraged them from being honest with the public. I say negligent ignorance, because instrument reliability is pretty basic stuff.

“Besides, there was broadly shared understanding among macroeconomists and central bankers of the best division of labour. Fiscal and budgetary policy should be set to achieve microeconomic and distributive goals, and the desired share of the state in the economy; while monetary policy should take care of stabilising aggregate demand.”


This is what I call the Consensus Assignment, and as the name implies it was certainly the consensus among mainstream macroeconomists before the 1990s. But the experience of Japan’s lost decade where they also had interest rates stuck at the ELB began a process of rethinking. By the time the GFC came around many macroeconomists had realised that there was an Achilles Heel in the Consensus Assignment. Fiscal stabilisation was still required when interest rates hit their ELB. That is why we had fiscal stimulus in 2009.

The importance of this cannot be overstated. The policy consensus in 2009 was that fiscal stimulus was required, because monetary policy was not enough. This consensus didn’t evaporate in 2010. What overrode it was mainly politics - what I call deficit deceit. There was also a bit of panic in some quarters caused by the Eurozone crisis. However a majority of academic macroeconomists continued to believe that further fiscal stimulus was required, and that majority got steadily larger as time went on.

Which means that the Consensus Assignment that Martin talks about is dead, or at least dead until monetary policy makers can agree some form of fiscal delegation (e.g. helicopter money) with governments. As this paper from the Boston Fed points out, downturns where interest rates hit their ELB are likely to become the new normal, but policymakers have not adjusted to this. (The exception is Labour’s fiscal credibility rule.) Quite simply, most policymakers have not learnt a major lesson of the Global Financial Crisis.