The IPPR Commission’s plan for a new economy

The final report of the IPPR’s Commission on Economic Justice is released today, with the full title of Prosperity and Justice: A Plan for a New Economy. [1] I was lucky enough to get an advance copy, and it is a very impressive document: very well researched and well argued. It is nothing less than a blueprint for a new progressive government. Of course there are some proposals I have doubts about, but it is sufficiently authoritative that in future anyone should ask of any progressive economic programme how does it relate to the recommendations of this report.

As far as my own area of monetary and fiscal policy is concerned, I’m not sure I have seen in one place as clear and comprehensive a summary of the lessons of the recent past and a better set of proposals for the future. I wrote about an early draft of this chapter in April, so I will be brief here. Their proposed fiscal rule separates current and investment spending, but suggests the ONS and OBR look to obtain a measure of spending that helps future generations that is better than the national accounts definition of public investment. They suggest a substantial increase in public investment, while current spending in constrained by a rolling five year target for balance. However they suggest that if interest rates are stuck at their lower bound, the focus of fiscal policy (current spending and taxes as well as investment) should be stimulus. Readers familiar with this blog will know this is very similar to the proposals in Portes and Wren-Lewis, 2015 and the Labour Party’s fiscal credibility rule.

For monetary policy they suggest ending the primacy of inflation, and adding underemployment and nominal income as primary targets. In addition, they suggest that QE involve creating money directly to expand the activities of a National Investment Bank (NIB) when a large macroeconomic stimulus is required. Note that, unlike a fleeting proposal by Corbyn, money creation to expand the NIB remains a call made by the independent Bank of England in a recession rather than by the NIB itself or anyone else. I would go further on the Bank’s mandate, but otherwise the IPPR’s proposals look eminently sensible.

The chapter on industrial policy seems sensible, with some ideas from Mazzucato (e.g. public sector led missions) clearly evident. Beside the NIB already mentioned, there is an emphasis on direct support rather than via the tax system (e.g. patent box) which often have large deadweight losses. They argue an industrial strategy should not just be about helping and adding to innovation clusters based around universities, but also in increasing productivity in what they call the ‘everyday economy’. In my view it is higher productivity and not greater union bargaining power that will raise real wages in a sustainable way, although in other areas a greater union presence can be helpful (see below).

For many one of the most interesting ideas - of course not new - is to end the shareholder model, and replace it with a stakeholders model where workers have an influence on the board and executive pay. It represents a move from a US to a more European model. While I find this argument fairly convincing, the idea under reforming the financial system that the Financial Policy Committee (FPC) of the Bank should target house price inflation is misconceived. What the economy needs is falling house prices, and once you make house prices a target the pressure will be to stop that happening.

The idea of a citizen’s (social) wealth fund is interesting, but I’m not sure a strong case for it is made here. Why should a government hold assets and issue debt, for example? If you want to redistribute wealth from the wealthy old to the poorer young, why not do so directly? On tax the proposal to combine income tax and national insurance seems sensible, as is the idea of a replacing bands with a formula based system (as in Germany). The same goes for a lifetime gifts tax to replace inheritance tax, and a land value tax.

There is so much else in the report, but let me end by talking about one issue: executive pay. There is a cute chart in the report that I reproduce below. 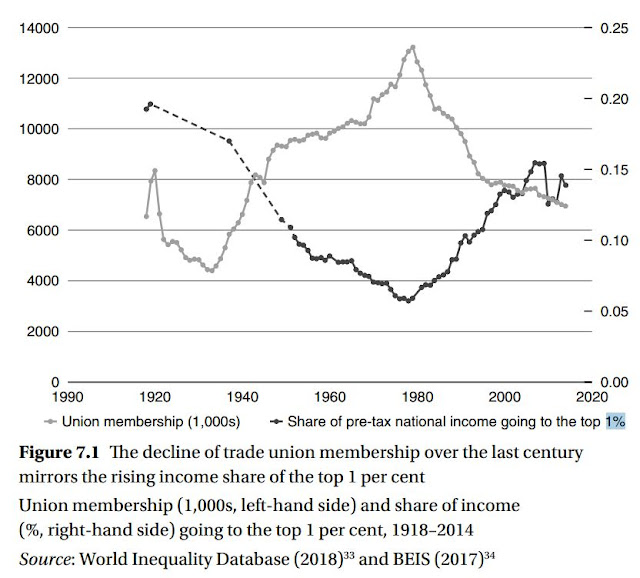 The report starts, quite rightly in my view, by emphasising the dangers of inequality. It also suggests that this cannot just be tackled ‘after the fact’ i.e. by tax and welfare measures. But will the stakeholder measures talked about above, or greater union influence, be enough to reverse runaway corporate pay? The rise of the share of the 1% starts with the advent of a neoliberal US and UK, and it has made the rest of us noticeably poorer. The report involves reversing many aspects of neoliberalism, but an interesting question is whether that is enough to achieve a decline in the 1% share, or whether other measures like higher top taxes are an essential part of doing that?

[1] This is a personal nostalgic footnote, which I am only writing because I could not easily see this information online. New Economy also happened to be the title of the IPPR’s journal in the early 1990s, which is now called Progressive Review. I remember it well because between 1993 and 1995/6 I wrote a number of articles for it based around simulations of the macroeconometric model I had developed with Julia Darby and John Ireland. The idea to do that came from IPPR’s Economic Director Dan Corry, with Gerry Holtham as overall Director at the time. Apart from members of the modelling team, Rebecca Driver helped write a number of the articles. The first article over that period had the title “What’s so Bad about Borrowing?” (plus ça change), and the last “Avoiding Fiscal Fudge” which proposed an independent fiscal institution or fiscal council for the UK. That took 14 years to come to fruition, and I hope many of the proposals in this report do not have to wait so long.