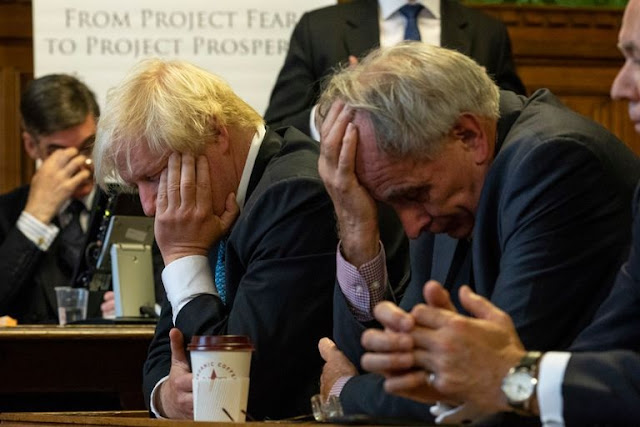 One reason Brexiters split in stage one of the Brexit endgame is that there is no good way forward for them. When Boris Johnson calls the EU’s Irish border backstop “a monstrosity” he is talking about its impact on the plans of the Brexiters rather than its impact on the UK. It destroys their hope of a Canada type Free Trade Deal with the EU, because the EU will not agree to anything like that without the backstop, but the Conservative and Unionist party cannot agree to a backstop that ends the UK single market.

Those that split over Chequers (the quitters) have one hope left, which is we crash out with No Deal. Those that did not, like Gove and Javid (the schemers), hope that one of their number can at some stage grab the party leadership and then change any agreement to their liking. But neither strategy is likely to work because of that ‘monstrous backstop’ and parliament’s ability to stop No Deal.

One way No Deal could happen is that May fails to compromise enough to get a Withdrawal Agreement (WA). If nothing else then happens, we get a catastrophic No Deal. But if she cannot make a deal with the EU she has to report to parliament on 21st January (ht Steve Lawrence). Parliament can then vote down this ‘neutral’ motion, and perhaps amend it if the speaker allows. But I suspect this is a bit academic, because what parliament is likely to request is what May herself would want, which is an extension of Article 50 (A50).

The EU does not want No Deal anymore than May does. So they are likely to agree to that request, but probably at some political price. The whole point of A50 is that all the power lies with the EU. What that price will be I do not know, but in any iteration between the EU and parliament I cannot see a No Deal outcome unless either party seriously miscalculates. This is not a sequence of events that looks good for May, which is one of the reasons why May is likely to conclude a deal.

In that eventually (there is a WA) the quitters will hope that they can defeat the deal in parliament. How many of the quitters will stay firm in that resolve is unclear, because the outcome of the deal being defeated is unlikely to be No Deal. Quitters apart, MPs want No Deal even less than they want whatever WA May puts to them. In the political chaos that results something like a referendum or a general election may emerge as a way forward (and the EU will extend A50 to allow time for this). Brexiters do not want a referendum, because for all their talk of the will of the people they only want that will if it agrees with their own wishes.

Given all this, the schemers may seem to be on firmer ground. Let the WA pass, and then change anything that is agreed subsequently once one of their number becomes Prime Minister. Note in passing that the Brexiters and May have a common interest in what I have called a perpetual Brexit: the Brexiters because it keeps the issue in members minds when they come to vote for May’s replacement, and for May because for that very reason the majority of Conservative MPs who are not Brexiters will want her to stay.

The problem for the schemers is that after the WA they face exactly the same problem Brexiters face now but more so. The Irish backstop will now be enshrined in a treaty. Any attempt to reduce the degree of alignment of regulations between the UK and EU, for example, would end the UK’s single market. Enough Conservative MPs will object to that and so prevent it happening.

The big flaw in the Brexiters’ plans to free ourselves of pesky EU regulations on employment, the environment etc is the Good Friday Agreement, the laudable wish of the Irish government to keep the spirit of that agreement intact, and the admirable wish of the EU to stand by one of its members. If that had not been the case, they might have got away with a FTA with the EU, but instead they are stuck with the ‘monstrous’ backstop. In the end the Brexiters have failed because they are just not very good at what they see as details. The critical detail in this case is the large island to the west of Great Britain.

The Brexiters may have failed in their primary aim, but they have caused considerable damage nevertheless. Estimates of the GDP loss so far are around 2%, and real wages have fallen by a lot more than that because of the depreciation. Unless MPs can, directly or indirectly, stop Brexit, we will end up at best with less sovereignty than we had as members of the EU. The damage to the UK's reputation, both as a safe place to export from and more generally as a pragmatic tolerant nation, will take a very long time to repair, and that time will not start until the Brexiters themselves lose their political influence.