In defence of the IFS, and why it cannot tell the whole story

Our own fiscal council, the OBR, is very restricted in what it is allowed to say by the party that created it. As a consequence, it is absolutely essential that we have widely respected bodies, principally the IFS but I would also include the Resolution Foundation and the National Institute (NIESR), that are able to provide good quality economic advice at all times, but particularly before General Elections.

A good example is the Conservative manifesto published last Sunday. Without the IFS, it is quite possible that it would have made extravagant promises on public expenditure and it would have also included some tax cuts. But because the media treats the IFS as authoritative and impartial, this year they will have judged that the political costs of a manifesto like that exceeded the benefits.

So the IFS or something like it is essential. But that does not, of course, mean that it is beyond criticism. Indeed it is essential that such criticisms are made (no one is perfect). There are two types of criticism. The first are specific criticisms: it got this piece of analysis or this particular statement wrong. The second is generic: it is often wrong because of a general failing of some kind. Let me take each in turn

A specific criticism I would make is that Paul Johnson’s initial reaction to Labour’s manifesto was ill-judged in the language he used. He used three words that you will not find in the IFS’s written assessment: colossal and not credible. On ‘colossal’, the written text uses the more neutral words ‘very substantial’. More seriously, he said claims that all the tax would be raised from companies and those earning over £80,000 were not credible.

That gave the media an easy headline. For example The Times wrote “Jeremy Corbyn’s plans to raise a “colossal” £83billion in extra taxes to fund an unprecedented public spending spree are “simply not credible”, the Institute for Fiscal Studies has warned.” The Mail wrote “Jeremy Corbyn's hard-Left spending splurge is 'simply not credible': IFS ridicules Labour leader's claim he can raise £83BILLION in extra tax to fund 'colossal' giveaways JUST from the rich - warning EVERYONE will have to pay”. The Guardian wrote “The Institute for Fiscal Studies, the non-partisan tax and spending thinktank, said that it does not believe Labour’s claim that it will be able to achieve everything it plans with 95% of taxpayers not having to pay any extra in tax”

There are two issues here. The first is about the direct incidence of tax which is how everyone, apart from those with some economics, understands by the question who pays tax. It is just not clear from their initial assessment whether the IFS are claiming that Labour’s numbers on revenues are wrong in any serious way. They don’t dispute the initial figures for corporation tax (I will talk about the longer run later), and welcome the measures for capital gains and dividends tax. Yet most people reading the phrase ‘not credible’ would think otherwise.

There is of course a legitimate question mark about the final incidence of corporate tax. As I note in my earlier post, the empirical evidence on this is all over the place. True, shareholders include pension funds. But none of this in my view justifies the phrase ‘just not credible’ to the tax plans in Labour’s manifesto, particularly as Labour pledge was about initial incidence. Now interviews, particularly in the age of 24 hour news and the resulting requirement for instant reactions, are hard to get right. But nevertheless I think it is fair to say that Paul Johnson, on this particular occasion, didn’t get it right.

Is there a generic problem that the IFS are biased towards the right, or against any kind of radical manifesto. Certainly many on the left think so, but then many on the right think the IFS is in the pay of the EU because it thinks Brexit will do what pretty well all economists think Brexit will do. How you feel also depends on your perspective. If a government in a situation you think is intolerable decides to do nothing, which is a fair characterisation of the current Tory manifesto, the IFS has little to say by way of headlines besides it being ‘remarkable’ (although, as with Labour, they should have mentioned Brexit). On the other hand, the IFS is almost bound to criticise some aspect of any radical plan of the type Labour are putting forward. This just illustrates that the IFS has a very limited remit, and cannot dela with everything that influences social welfare.

Having said that, I should note some of the things that the IFS did not say about Labour’s plans. They made comparisons with the past when talking about the size of the state under Labour’s plans, but did not (as the Resolution Foundation did do) compare that to other countries. This matters, because the IFS will know more than anyone that with any country with a state run health service the size of the state is very likely to grow over time. In addition in discussing revenue raised from Labour’s tax plans, they failed to discuss the potential Remain bonus which they had already analysed for the LibDems.

Another generic criticism is that the IFS are just bean counters. This is nonsense. For example their point about the incidence of corporation tax is not bean counting. I think the problem is more about how others use the numbers the IFS produce. For example, if you listen to the presentation of both parties’ budgets from 2017 by Carl Emmerson, you will see that they think Labour’s tax projections are too optimistic, but they still meet their fiscal rule with room to spare. Guess which number the media talked about and which they ignored. You could respond that the IFS should take that into account, but how could they do that?

A more credible generic criticism of the IFS is that they do not do macroeconomics. I have in the past made this point. If you listened to the 2017 presentation I linked to above, you will see some discussion (13.02 minutes in) of the supply side of each party’s policies. Labour have a plus (more infrastructure spending) and according to the IFS negatives (higher minimum wage, higher corporation tax, more bank holidays), and the Conservatives have a negative (less immigration), so they assume both parties will have no long run impact on output! Now it is just possible the plus and minuses for Labour cancel out, but just one negative for the Conservatives cannot equate to zero. They also assumed the multiplier from a balanced budget fiscal expansion is zero. They clearly don’t want to do macro.

Does this matter? Yes for two reasons. First sometimes macro has a critical influence on their overall assessment of plans, and as my illustration in the previous paragraph suggests it is not good enough to wish them away. Another example is in their analysis of Labour’s 2019 manifesto, where higher public investment under Labour will almost certainly outweigh any impact of higher corporation tax on investment. It is better to be humble about ignorance than pretend to take it into account and then do nothing, and better still to do something more rigorous on macro. Second, as the media takes the IFS as definitive, it means macroeconomic aspects tend to be ignored, which - as with 2019 - is very unfortunate.

The IFS have a real problem here. Their basic funding is for microeconomic analysis of tax and spending changes, and not for macro. For the Green Budget this year they teamed up with Citi who did the macro analysis. In an ideal world they would team up with a respected think tank that is known for its macro analysis, like the National Institute (NIESR). In the meantime we need to look to the Resolution Foundation, that clearly has macro expertise.

In 2019, many of the key issues are macro, or are not addressed by the IFS analysis. To see that, read the letter in the Financial Times yesterday from scores of economists. Issues of stagnant productivity, lack of real wage growth, regional inequalities, the state of public services and the need for a green transformation of the economy are all key issues influencing peoples’ welfare, are addressed by Labour’s manifesto but are not part of the IFS’s analysis. That does not mean what the IFS does should be ignored - as I suggested at the start it is vital work they do - but just that what they do is not everything that matters to peoples’ wellbeing.

The IFS's full analysis of each party's plans, released today, avoids some of the criticisms I make above. One chart below illustrates exactly the key point I'm making, which is that there are many more important things about each party's plans than whether their tax plans match their spending plans. In this case its Brexit, and it is to the IFS's credit that they showed this. 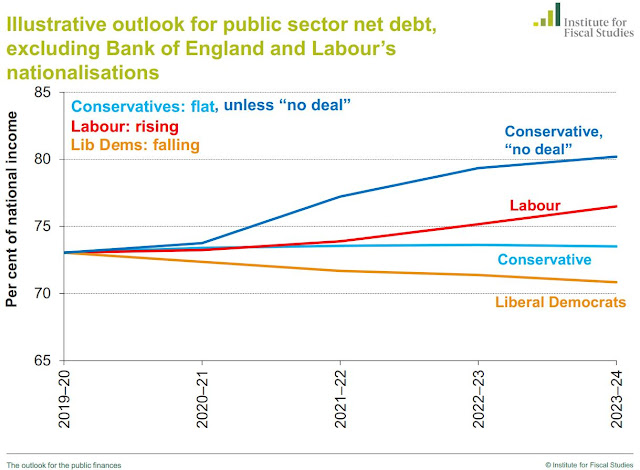 The chart shows that even though Labour's large investment programme raises debt, as it should do, this is dwarfed by the impact of a possible/likely Conservative No Deal Brexit.