The Tories will never undo the impact of austerity 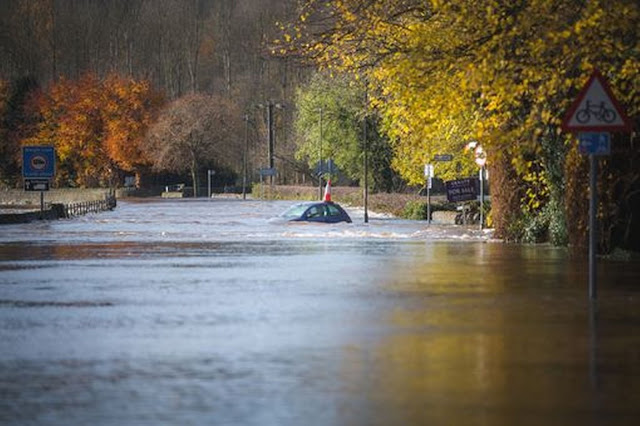 One of the impacts of 2010 austerity we saw again last week. Widespread flooding ruining hundreds of homes, and costing a life. Can we say those floods were caused by climate change? Not with certainty, but climate change has made this kind of flooding more likely. Can we say the lack of spending on flood defences under a Tory government made the recent floods worse? Not with certainty, but lack of spending has increased the damage flooding does more generally.

In 2007 the Labour government commissioned from Michael Pitt (no longer available on a government website, but available here) which stated:

“The scale of the problem is, as we know, likely to get worse. We are not sure whether last summer’s events were a direct result of climate change, but we do know that events of this kind are expected to become more frequent. The scientific analysis we have commissioned as part of this Review (published alongside this Report) shows that climate change has the potential to cause even more extreme scenarios than were previously considered possible. The country must adapt to increasing flood risk.”


The Labour government responded to this review by substantially increasing central government spending on flood prevention. It reached a peak in 2010/11, the last year of the relevant spending review. Subsequently the coalition government, as part of its austerity policy, cut back on spending, going directly against the spirit of the Pitt review. (More details can be found in my book, The Lies We Were Told.)

Flooding is a very visible example of what happens when a government cuts back on spending communities desperately need. There are hundreds more. Cutting Sure Start centres leading to growing pressure on the NHS. Squeezing local authorities so they cut provision for young people, together with less police officers, helping the spread of knife crime. Squeezing the NHS and local authority health provision leading to premature deaths. And so on.

Sajid Javid and Boris Johnson want people to believe they have begun to reverse the disaster of Osborne’s cuts. They have plans to return the number of police officers to 2010 levels, which leads to good headlines because the media always neglects to account for population growth, with the odd laudable exception from where the chart below comes. 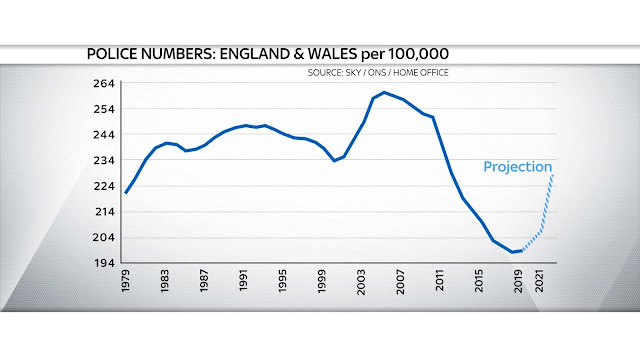 The number of GPs per head of population have also been falling in most of the UK, when they should be rising to cope with people living longer. Here is a chart from the Nuffield Trust. 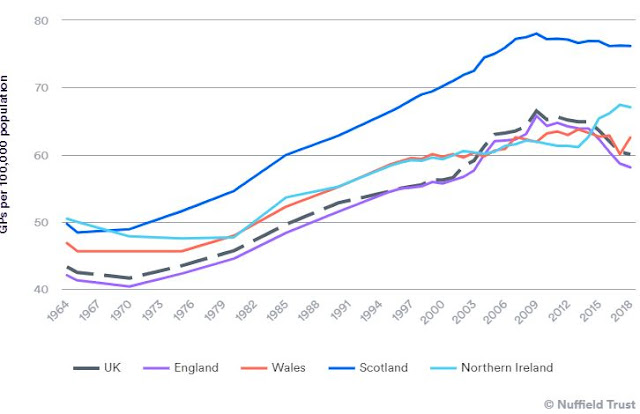 Again the Conservatives have announced plans for more GPs, but they have done that before and they have failed to materialise. The basic problem is that they are failing to train enough doctors, too many doctors go overseas because of poor pay and working conditions in the UK (remember the doctors strike), and their hostile environment policy and Brexit discourages doctors coming from abroad. I could go on and on.

But it is worse. We have to have severe doubts that the Tory spending plans, inadequate though they are, will be fulfilled. There are two basic reasons. The first is Brexit, which I talked about in a recent post. The second is taxes. Tories hate putting up taxes in any way people will notice, and really like cutting taxes. During the austerity period they cut income taxes and corporation taxes. This is simply no longer possible.

The reason why is health spending. The trend in health spending per person, or as a share of GDP, is relentlessly upwards. The trend in the graph above illustrates this. It reflects many things which cannot be reversed: not just increasing life spans but also technical progress in what can be treated, and the fact that the better off we are the more in proportion we want to spend on our health. For a time this upward trend was offset by the peace dividend reducing military spending, but that has come to an end. It has nothing to do with a free at the point of use system being inefficient - in fact the opposite is true.

Both factors, Brexit and taxes, reflect the influence of extreme neoliberalism in today’s Tory party. There are some Brexiter MPs who really just want to return to the days of Empire, or who just don’t get the idea of shared sovereignty, or want to keep foreigners out. But the key reason for the dominance of Brexit in today’s Tory party is a belief that a society free as far as possible of taxes and regulations and state ‘interference’ in the economy is a good society, and the EU is a barrier to that. The same ideology wants to reduce the size of the state way beyond what most of the public wish, and still calls for slashing red tape despite Grenfell and while greatly increasing red tape for trading firms because of Brexit.

Their neoliberalism has become extreme because they have, with Brexit, started working against the interest of UK business. The party of business has become the party that ignores business. The Tory neoliberalism has become so extreme that they think they know what is good for business even though they are told by business that it is disastrous. A former Tory business minister writes “I was aghast that a Conservative government, of which I was a member, had brought the world of business so low.”

Should we be grateful that the Tories have finally agreed to end years of growing cuts and in some areas start to reverse austerity? They really had little choice. I think we should credit the new Chancellor with stopping Johnson announcing tax cuts (at least for now), and for increasing public investment. But for the reasons I have outlined the Tories will never be able to substantially reverse the damage they did with austerity, because they remain wedded to an extreme neoliberal ideology.