Labour have a huge set of spending proposals, many of which are unequivocally good like extra spending on the NHS, some are open to debate like abolishing student loans, and only one that I think is foolish (keeping the state pension age at 66). It would be good if all the debate was about these spending pledges. However the standard excuse for why you cannot have these things has always been about paying for them.

There are actually two issues here. The first concerns current spending, around £80 billion each year or about 4% of GDP, and public investment, expected to rise by about £50 billion a year or over 2% of GDP. Labour's current spending increase is financed £ for £ mainly by higher taxes on corporations, capital gains and high earners, while the investment is financed through borrowing. Let me take each in order,

The figure for the increase in current spending and taxes is large. I personally would not call it colossal but it is large. I would argue that reflects the extent of the squeeze we have seen on the public sector since 2010. But what about the argument that it makes the share of government current spending in GDP the highest since the 1970s? A much better comparison is to look at other countries, as the Resolution Foundation has done here. 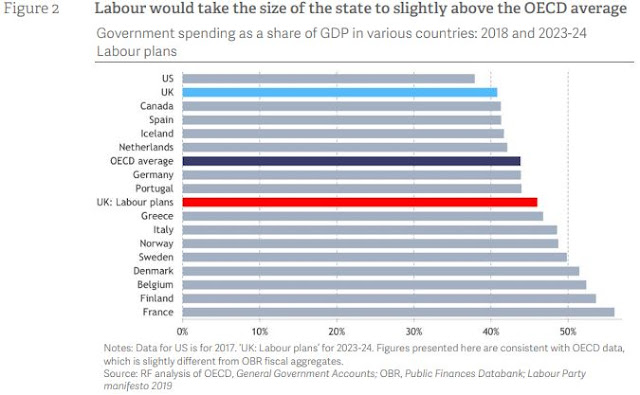 What Labour’s plans do is to move the UK from the bottom of the league table in terms of the size of the state to somewhere around the middle.

I think this is a key part of the Corbyn project. Under Thatcher, but particularly since Cameron and Osborne, the UK has pretended it can have a state only a bit bigger than the US. But of course the US does not have a universal health service free at the point of delivery. So a key goal of this manifesto is to move us from the bottom to the average in terms of size of states. Another way of putting it is that the UK will become closer to the European average, and further away from the US/Canada level.

The reason why comparisons with the UK’s past are misleading can be summed up with three letters: the NHS. For reasons I have talked about in the past, spending on health has been increasing as a share of GDP since WWII. Every time the Conservatives try to halt this we get growing waiting times. That means that the share of the state in GDP is bound to rise over time, unless there is some offsetting component of public spending. In the 90s there was - lower military spending following the end of the Cold War - but now there is nothing. So the size of the state is bound to rise over time.

Who is going to pay for getting us to the average of European countries. Under Labour’s plans it is the rich and corporations. I think Paul Johnson in his initial TV comments on the manifesto confused two things, and as a result said some things which were very open to misinterpretation. (Initial reactions to complex documents are often hard to get right,) There is no ‘black hole’ in Labour’s costings. The IFS say the corporation tax numbers are realistic, and I know Labour have tried hard to make them so. Johnson’s point is that companies are not people, and some people will pay this tax. The question is who.

On this issue it has to be said that there is no settled view from the empirical evidence. At one end you have the studies presented in a recent IPPR report (p11). This suggests that most of corporation tax changes fall on shareholders. Now some of those shareholders will indeed be pension funds, but that might influence those who hold those funds rather than those who hold none. Other evidence suggests a 50/50 split between shareholders and workers, and some suggest workers end up paying an even greater share. The honest answer is we do not know what the incidence will be.

There also seems to be a legitimate difference of opinion over the longer term impact of higher corporation tax. The IFS say it will reduce investment and therefore profits. My own view is that corporation tax plays a pretty small roll in investment decisions. The most important factor for investment in non-traded goods is the future level of demand, and here Labour’s strategy is very positive. For exporting firms that are more mobile, factors like the skill base, ease of exporting and political stability play a big role, which is why leaving the EU is so costly.

I have no doubt that a few of the tax increases proposed by Labour will not yield as much as they hope. But most analysis misses the elephant in the room, and that is Brexit. I think it is highly likely Brexit will not happen under Labour, and even if it did it would be far less costly than either the Tories plans, or the effects embodied in the OBR base numbers that many people use. For this reason the LibDems have talked about a ‘Remain bonus’ (in the incredible event they could form a majority government). Labour will also get this bonus.

As to the investment part of the programme, the key issue is once again whether the investment is needed and well spent. We should not be talking about whether it is safe to borrow it. There is virtually no chance that this money will not be available at low long term real interest rates. No one should be scared of investing in the future of our economy and the planet, whether its by adding 2% or more to the deficit.

Much more interesting than the ‘do the numbers add up’ question is thinking about the macroeconomic impact of Labour’s plans. If you read some people there will be an immediate run on sterling as capital takes its money out of the UK. Of course if enough people believe this nonsense it might happen, for a day or two. But the one area where Labour are not radical is macroeconomic policy design. We will have Bank of England independence and a solid state of the art fiscal rule. As soon as that becomes clear any depreciation will be more than reversed, and I suspect there will be an appreciation from day 1. Sterling will appreciate on the expectations of an end to a hard Brexit and rising interest rates.

Why will interest rates rise? The large increase in public investment alone represents a large fiscal expansion. So does the increase in current spending, because a lot of the tax increases will come out of personal or corporate savings. A big injection of demand in the economy will require an increase in interest rates to prevent inflation rising, although the appreciation in sterling will provide some temporary cushioning.

An appreciation in sterling is likely to raise the real wage of every worker in this country. Is an increase in interest rates a problem? For some it may be, but of course for every borrower there is also a saver. From a macroeconomic point of view an increase in interest rates is long overdue. It is a sign that that after a wasted decade we are finally getting the economy moving. You thought the economy was already strong? Just more Conservatives lies. 2010 to 2018 has been the weakest period in terms of growth in GDP per head since the 1950s.

In the unlikely event of a majority Labour government a stimulus of this scale might lead to shortages of skilled labour that would mean some plans may be delayed. More realistically that problem would be less severe in a minority government where some of the manifesto might be blocked by coalition partners. But either way, a Labour government implementing all or the major part of this manifesto will mean the economy as a whole will end a decade of low output and wage growth that has stifled UK innovation and productivity growth.

We should ignore the tired old discourse about whether we can pay for it, and focus on the benefits each individual spending increase or investment project might bring, and on the revitalisation of the economy that this manifesto will generate.