I have always had a problem with those who focus on the need to reduce low skilled immigration. Skilled migrants are OK, so the argument goes, because the UK needs their skills, but we don’t need low skilled immigrants because British workers can do those jobs. At a microeconomic level it makes sense, and in a world where there is widespread unskilled unemployment it may make sense. But in a high employment economy like the UK today, it makes no sense at the macro level.

To see this, let’s think about a stylised example. Suppose there are a fixed number of jobs at each skill level. You will always need the same number of engineers, care workers and so on. To make things easy suppose 50% of jobs are skilled and 50% are unskilled. You then allow some skilled immigration but not unskilled immigration. These immigrants demand goods and services like anyone else, increasing the overall number of jobs in the economy but not its skill mix. That has to mean that among British born workers, less than 50% are now skilled and over 50% are unskilled. The immigration system is shifting the British born workforce into more unskilled jobs.

It gets worse if we recognise that a skill based immigration system is, in essence, about pay, not skill. With the exception of those with a recognised qualification like a PhD, it is hard to measure how people's skills compare. What you can assess is how much they will be paid in the job they have been offered. So in the first instance an immigration system that is designed to exclude unskilled workers is actually excluding low paid workers. If you combine that insight into the stylised example above, it must mean that the immigration system is shifting the British born workforce into lower paid jobs.

So when people call for an end to unskilled immigration, they are in effect calling for more British born workers to be low paid.

That is a necessary conclusion from the assumptions I have made, but are my assumptions wrong? Home Secretary Priti Patel says there are 8.5 million economically inactive people in the UK who could do these unskilled jobs. By implication, unskilled migration is preventing these people getting jobs. The ONS estimate that only 1.9 million of those people want a job, and it is an open question how many can actually do the kind of jobs we are talking about, as very few are discouraged workers and many more are students, the sick, carers, or have retired early.

A second key assumption I made is that the number of high and low paid jobs does not change. Could stopping most low paid immigration force firms who pay low wages to pay more, or invest in labour saving machinery? For example, in talking about the care sector, the recent MAC report says


But as Polly Toynbee points out, working in the care sector (which should be classed as skilled but isn’t because the pay is so bad) is poorly paid because the money comes from the government via local authorities. Restricting immigration will not push up wages because the government ensures there is no money to pay higher wages. All that would happen is firms would be unprofitable and close down. A social care disaster is a very expensive way of getting the government to pay more.

But there is a more general point to be made here. We have a more efficient way of raising low pay than starving particular sectors of overseas workers, and that is by raising the minimum wage and enforcing that minimum. Take the food processing sector, which is another area that depends on many low paid workers from overseas. If you steadily raise the minimum wage, and pre-commit to doing so, you give firms time to adjust through mechanisation or raising wages. If the flow of workers suddenly dries up, it is more likely the firm will decide to locate its production overseas, which in turn may damage domestic supply industries.

One Brexiter, the CEO of the Scottish Seafood Association, has already said the plans would be disastrous for the Scottish fishing industry, for exactly this reason. As Jonathan Portes points out, the government’s plans largely follow MACs recommendations, and they could have been a lot worse. In practice the number of sectors where some unskilled immigration is allowed in is likely to expand from industry pressure.

If it doesn’t, then the UK food processing industry is not the only one that is likely to shrink. The UK tourism industry, that brings in lots of export earnings, will also be hard hit. Some industries cannot be so easily shifted overseas. The construction sector may just have to delay completion of some projects. I have already noted the problems in the care sector.

Why has the government chosen to go with the 'skilled immigrants good/unskilled immigrants bad' idea? As Bronwen Maddox says, it is a political rather than economic choice. It reflects the fact that the economic case for immigration cuts through. As I noted here, the salience of immigration has been falling since just before the referendum vote. It is easy to put that down to voters thinking that Brexit has solved the immigration problem, but an IPSOS/MORI poll suggests that is not the most important factor. 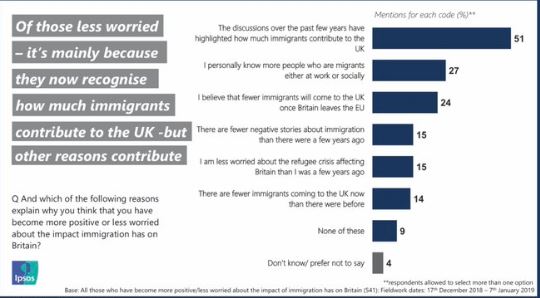 Half the people surveyed are less worried about immigration because they have understood the importance of the contribution immigrants make. Now immigrants with skills, in many people's minds, provide a clear contribution to the economy because of their skill, particularly if there are not enough workers with similar skills from the UK. That does not apply to unskilled workers, hence the focus on stopping unskilled immigration. In addition, all the negative stories they read about immigrants involve those who are unskilled.

As a result, politicians who want to appear ‘anti-immigrant’ focus on stopping unskilled immigration. But if you asked voters do they want British born workers to do more low paid work, the answer would be an overwhelming no. Thinking in macro terms is not easy. The reality is that, unless the government is planning to close down whole industries, restricting low paid immigration implies lower pay for British born workers.