What causes concern about immigration

It is part of folk lore among politicians and most social scientists that concern about immigration is governed by the number of immigrants. So how do we account for the decline in the relative salience of immigration since the EU referendum (source)?

There are of course many explanations for this decline. Perhaps people now see the benefits of immigration after all the post-referendum talk of nursing and doctor shortages. A rather more straightforward explanation is that people think that by leaving the EU the immigration 'problem' is being solved (i.e immigration numbers are much reduced). If it is the latter, then their knowledge is incomplete. 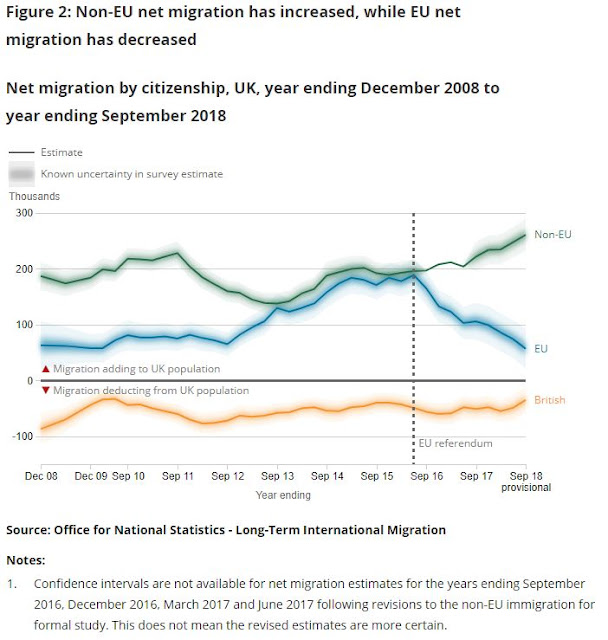 Roy Greenslade notes that the newspaper articles full of stories of immigration peril have all but disappeared. He writes

“It was the press phenomenon of the age 10 years ago, and for at least the following six years – right up to the EU referendum. Since then, however, immigration has all but disappeared from newspaper pages.”


Could it be that the explanation for the diminished salience of immigration is the very simple one that it is no longer in the news?

This shouldn’t be a surprise. Much of the concern about immigration is in areas that see very few immigrants. If people are getting their information ‘first hand’ from friends or relatives living in areas of high immigration you might expect a relatively short lag between numbers and concern, but if people are getting their information from the media you would require some change in how the media covered this issue before salience changed. Or to put it more crudely, salience to some extent is inevitably going to reflect what is ‘in the news’.

This does not mean salience is completely divorced from what people think. You could fill newspapers with stories about the housing problems of the very wealthy and it is unlikely that housing would start climbing the salience ranking. It is also true that rising immigration numbers helped newspapers write stories of 'floods' and 'waves'. But what it does mean is that if stories about immigration start disappearing, salience will gradually decline.

The more interesting question is why newspaper headlines about immigration, which in newspapers like the Sun and the Mail were explicitly or implicitly hostile to immigration, should decline sharply after the referendum vote. Roy Greenslade writes

“Yet the undeniable truth, the sad, sick, unvarnished truth, is that migration is off the media’s central agenda for two reasons. Firstly, it is no longer a political issue. With the pro-Brexit vote having been achieved, there is no need to keep on injecting the same poison into public debate. Job done. Secondly, seen from the newspaper editors’ perspective, it is not a sales-winning topic at present. No need to play to the gallery. There is no “value” in running anti-immigrant stories.”


In other words, newspapers are not publishing alarming stories of waves of non-EU immigrants coming to the UK because there is no political or sales motive for doing so. It is like saying if people who are hostile to immigration think leaving the EU means job done then let them. Increasing immigration salience was politically important for these newspaper owners while Labour was in government and to push the Tory government to support Brexit, but no longer.

Which, in turn, is why a Conservative government not led by Theresa May and without immigration targets can contemplate a fairly relaxed immigration regime, as Jonathan Portes notes. The other reason is that opposition to immigration (rather than salience) has been declining since a couple of years before the referendum, as the Migration Observatory also shows. Since 2017 more people think immigration has had a positive impact on the UK than think the opposite.

As Rob Ford notes, we don’t know why the public are feeling more positive about immigration, but equally too many have failed to notice how things have changed. I would add that too few also realise how changes in the salience of immigration tells us a lot about what has been in newspapers, and rather less about the underlying views of voters or, indeed, the number of immigrants coming in to the UK.