There is still a lot of confusion around about why UK real wage growth has been so low since the Global Financial Crisis and 2010 austerity. Many want to point to what economists call the functional distribution of income, which is the split between wages and profits. This was one of the issues I talked about this in a recent post, but perhaps a more direct approach is required.

The first point to note is that none of the decline in real wages over the last decade or so is about a shift from wages to profits. Here is the labour share of income from the 1970s until 2021. 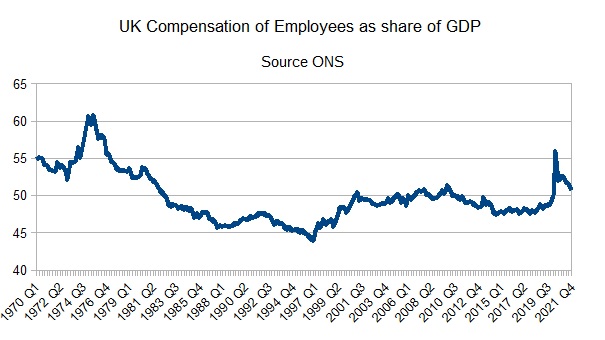 The labour share has fallen since the 1970s, but all of that fall occurred before the recent period. Furthermore, the share of corporate income in GDP has remained fairly flat during this century. There has been no sustained shift from wages to profits over the last ten to fifteen years according to the data. There are a lot of problems with UK corporations, but decreasing labour’s share of national income isn’t one of them.

As my earlier post makes clear, the main reason why real average labour compensation has grown so slowly over the last ten or fifteen years is that output growth and productivity growth have been so low. It’s not about the distribution of the cake, but the size of the overall cake. It is no coincidence that ever since Conservatives started talking about a ‘strong economy’, the UK economy has been anything but strong. (It is no coincidence because Conservative politicians calling things a success to distract from failure started with Cameron/Osborne and the economy.)

What about this year? In the first quarter of 2022 the picture is very similar to the above. Of course real wages in April were lower than in January, but that is because inflation has been pushed up by higher commodity prices. The only company profits to benefit from that are those of commodity producers, and in particular oil and gas producers. That is why high windfall profits taxes on those companies make perfect sense.

I think some of the confusion on this issue comes from the US, where the story is different. While real labour compensation in the US tracked productivity growth pretty closely in the 1980s and 1990s, this stopped happening at the beginning of this century, with labour compensation growing less rapidly than productivity. This in turn has produced a substantial fall in the US labour share, and a rise in the share of profits. But this has not been happening in the UK, and the picture overseas varies greatly from country to country. Note also that a falling labour share does not automatically imply a higher profit share, but may instead reflect increases in indirect taxation, lower subsidies or higher other income.

Another source of confusion is generated by comparison of productivity and real median wages. I first talked about the decoupling between these two measures in this post back in 2014, based on a study by Pessoa and Van Reenen. That study has recently been updated and extended by Teichgräber and Van Reenen (HT @centrist_phone), which gives me a good excuse to talk about its conclusions once again.

In terms of real median wages and productivity there has been uncoupling in the UK. As there is no decoupling between productivity and average real labour compensation, then why are things different for real median wages? As with the earlier study, Teichgräber and Van Reenen find two major causes. The first and most important is the difference between mean (average) and median due to growing inequality at the top, and the second reflects growth in employers’ non-wage compensation (basically pensions).

Here I want to focus on the inequality cause, which is in large part down to the increasing income share of the 1%. Earnings at the very top have risen more rapidly than the rest (see below), which gets into the mean or average compensation measure but is not part of the median measure. A lot, but by far from all (see also below), of these high and rapidly growing earnings are in the financial sector. If you think that was a thing of the past (pre the Global Financial Crisis), think again, with earnings in the financial sector growing over the last year more rapidly than most. This in turn should make us sceptical about seeing the Global Financial Crisis rather than 2010 austerity being the key turning in the UK economy's fortunes, but that issue is for another time.

The key point I wanted to make in my post 8 years ago was that the growing inequality of the 1% has a big impact on everyone else. Concern about inequality at the top need not be, as much of the media likes to suggest, about envy, but instead can be about there being less income for everyone else. The growing income share of the 1% has not paid for itself in terms of more rapid growth, so their extra income comes from the 99% i.e. other workers.

There is a lot more of interest in the Teichgräber and Van Reenen paper, particularly about the self-employed, but I want to stick to the theme of inequality at the top by moving to a recent IFS paper on top incomes. Here is a chart from the paper. 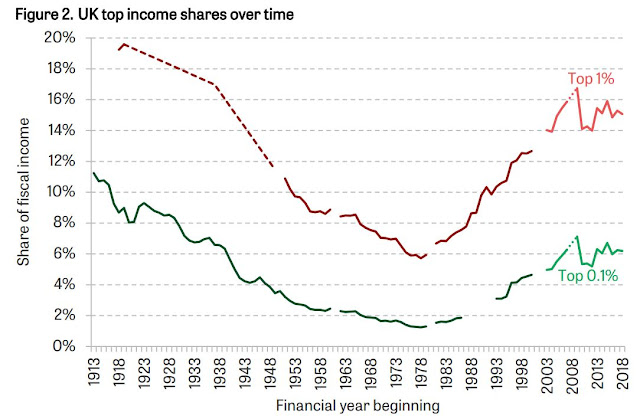 It shows total income for the 1% and 0.1% over the last hundred years. Their share fell almost continuously from WWI to around 1980 , and it then went back up over the 1980s and 1990s. Over the last decade and a half it has been erratic with no clear trend.

This is total pre-tax income, not just wage income, but income from employment accounts for most of the income of the top 1%. As Chart 3 from the paper shows, around ¾ of the income of the 1% comes from employment: it is only for the top 0.1% that falls to just over half. As the paper points out, only a tiny proportion of the 1% are CEOs. To quote (references to studies omitted)

“Instead, many of the top earners are working in highly profitable industries. 29% of wage earners within the top 1%, and 44% of those in the top 0.1%, work in financial services, compared with just 5% across the top half of the income distribution….This speaks to the increasingly well-documented international trend that increases in income inequality that have taken place since the 1980s have been primarily driven by increases in wage differences between firms rather than within them. That is, the top of the income distribution seems increasingly populated not by the most senior individuals from a wide range of firms, but by the employees of a narrower group of high-paying companies concentrated in, for example, the finance industry.”

The paper includes a lot of interesting detail, and at the end there is a very good discussion of possible ways to increase top tax rates. However I want to return to the theme of low real wage growth since the Global Financial Crisis and 2010 austerity. As the chart above shows, the income share of the top 1% has not been steadily increasing over this recent period. This implies that increasing top incomes do not account for much of the poor growth in median real wages over this recent period. The Teichgräber and Van Reenen paper confirms this (see Figure 3). Figure 5 shows that most of the decoupling for median wages occurred in the 1980s and the first half of the 1990s.

Thus not only has there been no decoupling between productivity and labour compensation in the UK, but the decoupling caused by higher income inequality at the top mostly occurred at the end of the last century, and does not therefore account for the slow growth in median earnings in the last decade and a half. So even for median real wages, the last dismal decade and a half is mainly the result of poor growth in output, rather than any shift to profits or growing inequality at the top. It has been a dismal period in itself, but also in comparison with most other G7 countries (for the US, see here).

This allows a nice characterisation of three political periods in terms of the overall economic cake and how it was distributed. Thatcherism, from 1979 until the mid-90s, was a period of growing inequality at the top as well as widespread unemployment, but because overall growth was reasonably good (compared to other G7 countries) real wages still increased. So under Thatcher we had a growing cake shared more unequally. Under the Labour government inequality at the top grew much less rapidly and unemployment fell, and until the Global Financial Crisis the economy continued to grow well. So under Blair/Brown we had a growing cake, as well as a major improvement in the NHS in particular. The big change under Conservative-led governments since 2010 has been poor growth in GDP and productivity, and a decline in public services. Since 2010 the cake failed to rise.

This is one reason why it makes sense for Labour to focus on the poor growth record since 2010. It also shifts the argument away from alleged (not actual) Labour fiscal profligacy onto what really matters for voters today, which is their stagnant or falling real incomes. When the cake fails to rise, it makes little sense to talk about how what is left is divided between wages and profits, but instead to talk about getting a better recipe. Even if Labour’s recipe for growth is not totally convincing, particularly when the Brexit ingredient is still in there, voters will think they have little to lose by changing the cook. But as this post also makes clear, if Labour gets into government it has to decide whether it wants to improve the post-tax incomes of the 99% by belatedly doing something about the shift in incomes away from most workers towards the 1% at the top.