It makes no economic sense to keep shrinking the state without changing what the state is meant to do.

Since Chancellor Hunt cancelled his predecessor’s cancelling of the rise in corporation tax and postponed indefinitely the cut in income taxes, but did not cancel the cancellation of the rise in national insurance contributions, there has been much talk of Austerity 2.0. I’m not sure I like the label Austerity 2.0 as a description of possible future public spending cuts. The label austerity for the cuts after 2010 made some sense to me because it was about cutting public spending at just the wrong time in the economic cycle. It ignored everything we learnt from The General Theory that is now embodied in state of the art macroeconomics. It didn’t just make users of public services worse off, but it made everyone worse off by reducing national income. Some of that income loss was probably permanent.

This will not be the case for any spending cuts announced in the Autumn Statement, because we are at a different point in the business cycle. It may not feel like an economic boom, but the Bank of England is raising interest rates because it thinks there is excess demand in the labour market. To a first approximation the more public spending is cut, the less the Bank needs to raise rates. So spending cuts need not reduce everyone’s income, as they did from 2010 onwards. In that sense it’s not austerity 2.0, but just cuts in public spending.

There is another crucial difference between any public spending cuts announced in the Autumn Statement and what happened after 2010, and that is the state of public services and the extent of poverty. Because of what happened from 2010 onwards, plus inflation squeezing recent budgets set in nominal terms, plus public pay rising a lot less than private pay, most public services are in a critical state right now. As I have said before, talk of further cuts is an abomination. We should instead be talking about spending increases.

Take the largest component of public services, health. The NHS and social care desperately need more money to reduce record waiting times for ambulances and routine operations, and that money has to include paying more to nurses, doctors and care workers to stop staff leaving. We also should allocate more money to start training the number of nurses and doctors we need. Making cuts to planned health spending is unthinkable for any government that cares about the welfare of its citizens. Talk of efficiency savings is just another way of making cuts.

But health is not unusual. Delays in the courts are at record levels, and the police are solving less crimes. Many/most schools will have to cut back on staff next year because they have had no money to pay higher energy bills. Cutting public investment and maintenance just creates problems for the future: the Institute for Government estimates maintenance backlogs for Schools, the NHS, courts and prisons stands at £23.7bn. Equally cutting welfare spending when real incomes are squeezed by high food and energy prices and real wages are falling is also unthinkable for any decent government.

It seems fashionable for many in the media to say that public spending cuts are inevitable. Not only do statements like this show how completely out of touch those making them are with what is happening to public services, but it is also a highly partisan proposition. But just as important, the idea that there is no alternative is just false. There is a clear alternative, which is to raise taxes.

We are so used in the party political arena to debates about more or less public spending that there is a danger of forgetting some basic economics. With goods produced by the private sector, we think it obvious and beneficial that the amount provided reflects the preferences of those buying. If I asked why a certain percentage of total consumption was on food and drink, while another percentage was for clothing, the obvious and correct answer is that those percentages reflect the average preferences of UK consumers.

However people also have preferences over how much health provision they want, and how much education or law and order. If the state is doing its job properly, it will allocate spending over the public services to reflect those preferences and needs, bearing in mind costs (paid for through taxes) and available resources. We may be sceptical that the political process is capable of doing that, but what evidence we have suggests that broadly it does. Take health for example. As people have become wealthier and are living longer, and as what medicine can do has improved, the amount spent on health has steadily increased in most OECD countries, even though the role of the state in health provision varies widely among those countries.

We can see this problem clearly when there exists both state and private provision of the same service. Here is the ratio of spending per pupil in 'public' schools compared to state schools since 2003: source IFS. 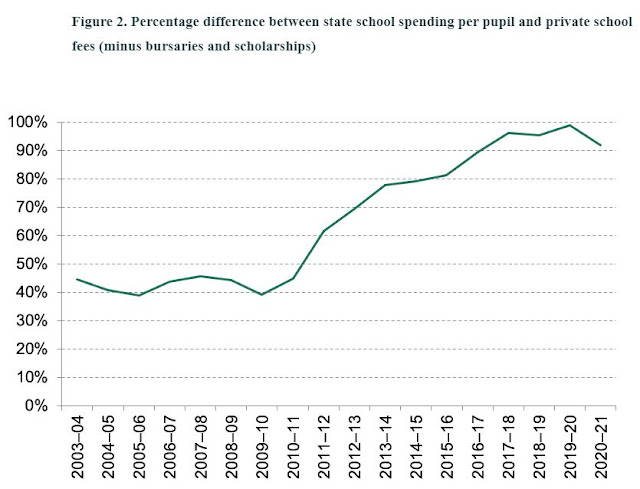 Are the preferences for a good education for their children so very different between those who use state schools and those who don't? If we discount that possibility, then this chart suggests those using state schools are currently not getting the level of education that their parents would be willing to pay for through taxes. More generally, we know that those people who want higher taxes and public spending far exceed those who want less of both.

There is a perfectly legitimate argument about whether certain services should be provided by the state or the private sector. The debate over the size of the state should fundamentally be about what the state does. But once the decisions about who provides these services are made, then those services provided by the state should be at a level to reflect the preferences and needs of the state’s citizens. That implies clear limits to how much or little is spent on the services the public sector provides. If spending is below that lower limit, then the government is failing in its duty to provide the services it is required to provide.

With people dying in ambulances while queuing up at A&E, with victims of violent crimes waiting over a year before cases come to trial, with headteachers talking of school children crying from hunger, it is clear we are well below acceptable levels of provision of what the state provides today. To the extent this is a political statement, it is about government failure rather than the size of the state. [1]

Like many of our current problems, this government failure stems from the Cameron/Osborne period. They remembered how Thatcher had reduced the role of the state, and wanted to do the same. But a lot of what Thatcher did to reduce the role of the state involved transferring tasks from the public to the private sector, like provision of energy and water. Cameron/Osborne did very little of this, but instead just reduced the amount of money available for existing state provision. It is as if Thatcher, rather than privatising the water industry, had just rationed how much water people are allowed to have each day.

The same point applies to those who say that the share of government spending (whether on public services or redistribution, including from young to old) or the share of taxes in GDP has to be less than some arbitrary number, or that a growing share is somehow indicative of excessive public spending. If we are talking about public services this is equivalent to saying that households should only be spending some arbitrary amount on eating out as a share of total income. The reality is that over time as incomes rise people want to spend a higher proportion of their income on eating out, and as incomes and life expectancy rises and medicine improves [2] they also want to spend more as a share of national income on their health. As health is provided by the state, the only way they can do that is through higher public spending funded by higher taxes.

A favourite phrase that journalists use is that UK voters want to pay American levels of tax but want European levels of public services. But this comparison makes no sense, because most health in the US is provided privately. The reality is that UK taxes are well below that of most European countries. The reason for this is that since 2010 Conservative governments have believed they can get away with providing either very poor or downright dangerous levels of public services because they are obsessed with low taxes. [3] Any sensible discussion around the Chancellor’s Autumn Statement, and future budgets, would be about what taxes should be raised to restore our public services to a reasonable level..

[1] If you think the state should pay but some services should be provided by the private sector, which seems close to the current government view, then you have to accept the quid pro quo that this option will be more expensive for the state, because private companies need to make a profit and this is not normally offset (if offset at all) by greater efficiency. Of course in health this privatisation of provision together with inadequate funding may be a prelude to moving to an insurance based system. To say such a strategy is dishonest is the least of its problems. Rather more serious is that it kills people.

[2] Unfortunately the pandemic means we may need to add ‘as new diseases emerge’ to that list. A point that is hardly ever made is that if Covid becomes endemic then we need a step up in the share of health spending to GDP, otherwise other health services are bound to deteriorate.

[3] Thatcher was able to reduce taxes in part by not investing North Sea Oil revenues and selling public assets.