Why is the Bank of England making the expected UK recession worse?

The Monetary Policy Committee of the Bank of England (hereafter ‘the Bank’), by raising interest rates over the last six months, intends to play its part in creating a prolonged UK recession. This is not speculation but a statement of fact. The Bank’s latest forecast, similar to the one in August that I highlighted in an earlier post, suggests negative growth in GDP in the third quarter of this year, forecasts a further fall in the fourth quarter, with further falls during the first half of next year.

Why does the Bank think it needs to help create a prolonged recession? It is not because energy and food prices are giving us around 10% inflation, because a UK recession will do almost nothing to bring energy and food prices down. Instead what has worried the Bank for some time is that the UK labour market appears pretty tight, with low unemployment and high vacancies, and that this tight labour market is leading to wage settlements that are inconsistent with the Bank’s inflation target. Here is the latest [1] earnings data by sector. Earnings growth is around 7.5% in the wholesale, retail, hotels and restaurants sector, about around 6% in finance and business services and the private sector as a whole.

Of course these numbers still imply large falls in real wages for most. For many it seems odd to describe the UK labour market as overheated when real wages are falling. Perhaps the easiest way of thinking about it is to imagine what would happen if the labour market was slack rather than tight, and as a result firms had complete discretion over what wage increases it would pay. Domestic firms are under no obligation to compensate their employees for high energy and food prices, over which they have little control and which are not raising their profits. As a result, if firms were free to choose and there was abundant availability of labour, they would offer pay increases no higher than the increases we saw during 2019. The fact that in the real world firms feel they have to offer more is consistent with a tight labour market where many firms are finding it difficult filling vacancies.

Average private sector earnings running at around 6% are not a problem for the Bank because it is anti-labour, but because it believes wage growth at that level is inconsistent with its inflation target of 2%. It's not the kind of wage-price spiral we saw in the 1970s, but if earnings growth were to continue at 6% over the next few years then the Bank would almost certainly fail to meet its mandate. But earnings growth will slow as the UK recession bites. The big question for the Bank is whether they are overreacting to a tight labour market by creating a prolonged UK recession. Are they using a sledgehammer to crack a nut?

To try and answer this question, we can look at the Bank forecast based on no further increases in interest rates. The reason for looking at this forecast, rather than the ‘headline’ forecast based on market expectations of further rate increases, is that the Bank has been explicit in its scepticism about these market expectations. (Why the Bank cannot tell us how they expect rates to change in the future remains a mystery to many of us.) 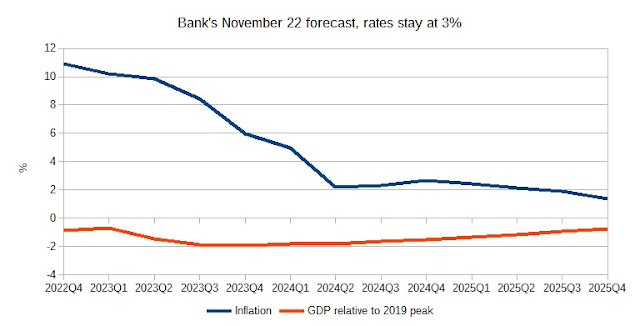 The blue line is the Bank’s forecast for year on year consumer price inflation. It is expected to come back down rapidly, ending up close to target in mid 2024. The red line is GDP relative to the pre-Covid peak quarter in 2019. [3] It shows a recession hitting its bottom in around a year’s time, but then recovering at a snail’s pace subsequently, so that GDP by the end of 2025 is still below the 2019 peak! This prolonged recession implies steadily rising unemployment, increasing from current levels of about 3.5% to over 5% and rising by the end of 2025.

If we take this forecast seriously, and we presume the Bank does, then there is little need for rates to increase further than 3%, and we would expect the Bank to start cutting rates by 2024 at the latest. The reason to expect this is that inflation is undershooting its target by the end of 2025, suggesting unemployment of 5% is too high to achieve stable inflation. We will have gone from an overly tight labour market to one which is overly weak. Interest rates influence inflation with a significant lag, so to stop this undershooting and get a stronger recovery interest rates need to start falling by 2024 if not before.

This observation invites another. Rather than raising rates now, and creating a significant recession, only to have to cut them again after a year or two, wouldn’t it be more sensible to not to raise rates by so much right now? [2] That might mean inflation takes an additional year to go back to a target, but after a massive energy price shock that would be more than understandable. If the Bank thinks their remit requires them to get inflation down below 3% within two years, that remit looks far too ambitious after double digit inflation.

Is the Bank’s forecast of a recession an inevitable result of having 10% inflation today? The short answer is no. To repeat the point made at the start, the Bank cannot control energy and food prices which are the main cause of 10% inflation. The correct question is does a tight labour market now inevitably require a recession to correct it?

In the 60s and 70s macroeconomists used to think that an economic boom (in this case an over tight labour market) had to be followed by an economic downturn (or even recession), because that was the only way to get inflation back down. It was the logic behind the phrase ‘if it’s not hurting it isn’t working’. But nowadays macroeconomists believe it is possible to end a boom and bring inflation down without creating a downturn or recession, because once the boom is brought to an end a credible inflation target will ensure wage inflation and profit margins adapt to be consistent with that target.

The Bank might argue that this will only happen if interest rates are increased now, because otherwise the inflation target loses credibility. But as Olivier Blanchard observes here, the lags in the economic system mean a central bank should stop raising rates while inflation is still increasing. If a central bank believes it will lose credibility by doing this, and feels it has to continue raising rates until inflation starts falling, this will lead to substantial monetary policy overkill and an unnecessarily recession.

Of course raising interest rates to 3% is not enough on its own to cause a prolonged recession. Probably more important is the cut to real incomes generated by higher energy and food prices, which is enough on its own to generate a recession. On top of that we have a restrictive fiscal policy involving tax increases and failing public services (more on that next week). Both together should be more than enough to correct a tight labour market. To have higher interest rates adding to these already large deflationary pressures seems at best very risky, and at worst extremely foolish. The question we should be asking central banks is not why they are raising interest rates in response to higher inflation, but instead why they are going for inflation overkill by making an expected recession even worse.

[1] Data up until September should become available this week.

[2] A policy of raising rates when you can see a weak recovery and below target inflation in three years time, because you think you can deal with those problems later, is a good example of what macroeconomists call ‘fine tuning’. Fine tuning makes sense in a system where you have exact control and can forecast accurately, but makes much less sense for a macroeconomy where neither is true. The danger of trying to fine tune the macroeconomy is that errors in timing mean the economic cycle gets amplified.

[3] I chose this way to show GDP because it illustrates just how poor the economy has performed in recent years, reflecting a decline relative to most other G7 countries that began over a decade ago.