UK attitudes on the size of the state

This is a follow up to my post on shrinking the state, but actually it is about something I found when thinking about the Scottish independence referendum, so let me start there. If Scotland votes for independence, it will be because enough Labour voters voted Yes despite Labour’s support for the Union. It seems quite clear from the Scottish Nationalists’ pitch in these closing weeks that the appeal to these voters is that by voting for independence you can ensure you never again have a Conservative government.

Yet there is a puzzle here. England and Scotland are not so different in terms of political attitudes. This is true across a wide range of issues: Scots are only a little more to the left than the English. Furthermore, as John Curtice and Rachel Ormston show here, this difference has not noticeably increased over the last ten years. Let’s focus on the specific issue of the size of the state. Here is the proportion of people who thought taxes should rise to increase spending on health, education and social benefits in each country. 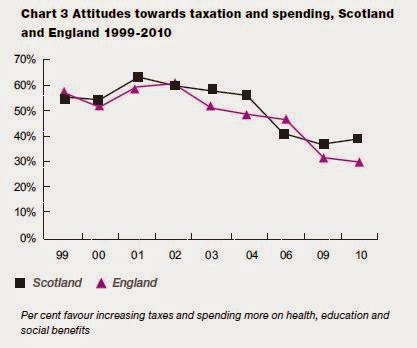 The proportion is generally higher in Scotland, but not by much, and it has been falling in both countries over the last ten years.

When I saw this data, I wondered about what was missing from the chart. Respondents were given two alternative responses: the level of taxation should be less, or it should stay about the same. Here is the same question for the UK as a whole (source: British Social Attitudes survey). 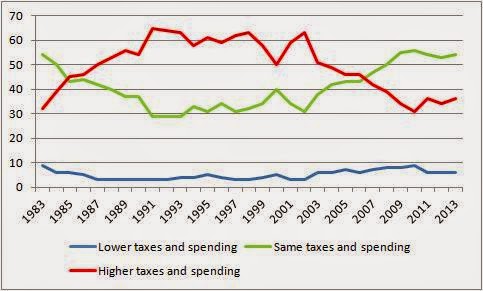 In terms of movements over time, it is interesting to compare this with data on the levels of UK government spending and taxes, over a longer period than I gave in my previous post. 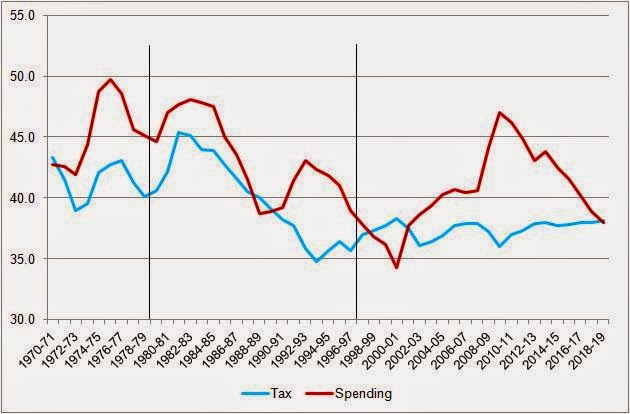 If you think about the turn of the millennium as being the end of the Thatcher era, then the Thatcher years saw a reduction in the size of the state, whether measured in terms of taxes or spending. From the previous chart, it looks like this was against popular opinion at the time, because we saw a sustained rise in the proportion of people wanting a larger state in the 1980s. This proportion started falling over the same period that Labour were increasing the level of public spending, which again makes sense. So there is little evidence of a change in public attitudes here: the state was too small in the 1980s and 1990s, and it began to move towards a level the majority desired during the last Labour government. There is absolutely no public mandate for any renewed shrinking of the state.

Which prompted this thought. As public attitudes either side of the border are not so very different, and given these particular attitudes about the size of the state, perhaps the relevant question is not why the Conservatives and UKIP are so weak in Scotland, but why are they so strong in England? As John Ruddy notes here, in the mid 1950s the Conservatives won over 50% of the Scottish vote. What happened since then was not a collapse at the expense of Labour, but at the expense of the SNP and Liberals.

Perhaps a better way to start thinking about what has been happening is as follows. The big change over time has not involved public attitudes, but the political position on economic issues of the Conservative Party. Just like the Republicans in the US, it has moved substantially to the right, beginning with Thatcher, and continuing under Cameron. Just as with the Tea Party in the US, there is a sizeable minority that wants to go further. However this rightward shift does not reflect majority opinion, and so when enough alternatives exist - as in Scotland - votes have drifted away from the Conservatives to more moderate centre right parties. In a two party system like the US, or with a voting system that favours the two main incumbent parties like the UK, that cannot happen.