Redistribution under the UK coalition government

In his party conference speech, David Cameron did mention inequality. He did not say, as Ed Miliband said recently (see postscript to this post): “This country is too unequal. And we need to change it.” Instead he said “Under Labour, inequality widened. With us, it’s narrowed.” So do the two quotes above mean that both major parties now aim to reduce inequality?

Here is the evolution of two aggregate measures of UK income inequality over time, as calculated by the IFS from this recent study. 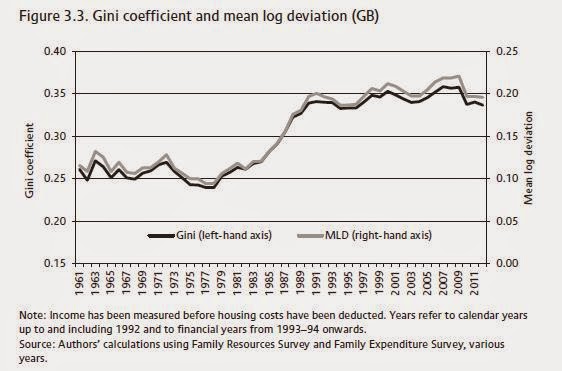 The main change is the large increase in inequality that occurred under Mrs Thatcher from 1979 to 1990. There was then a small tendency for inequality to increase until around 2007, since when inequality has fallen. The main reason for this recent fall is the decline in real wages over this period, while benefits have remained more constant in real terms. The share of the top 1% also rose during the Thatcher period, but unlike the measure above continued to rise sharply until around 1997/8. It then remained relatively stable until around 2004, rose sharply until the financial crisis, when it fell back in 2010/11 to end 90s/early 00s levels. (For details, access the PSE database here.)

If the decline in real wages since the financial crisis has reduced overall inequality, what impact has government fiscal changes had? In a landmark report issued this week, Paola De Agostini, John Hills and Holly Sutherland analyse who has gained and who has lost as a result of the direct tax and transfer changes made by the coalition government. (Indirect taxes are excluded.) One of the things I liked about the analysis is that it attempted (with some success) to reconcile its own results with similar analysis undertaken by the UK Treasury and the IFS.

The headline result is shown in this chart. 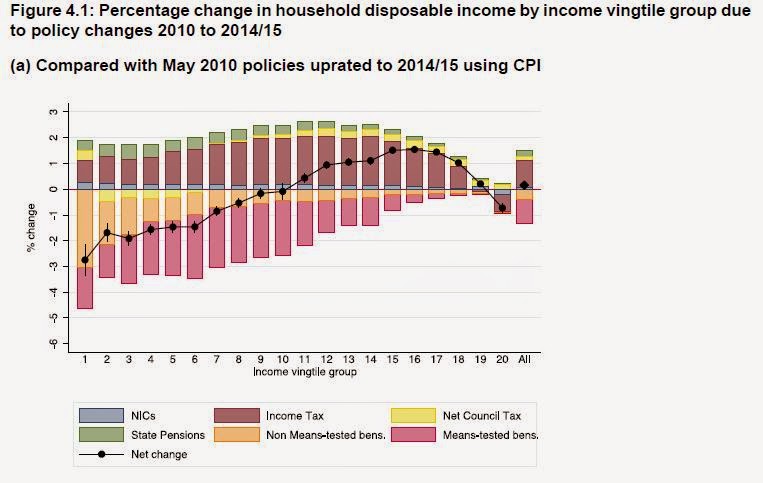 The black dots track who has gained and who has lost as a result of the coalition’s changes to direct taxation and benefits, including pensions. The poorest have lost out, while the main gains have been in the middle of the top half of the income distribution. So while a decline in real wages may have reduced inequality in the years following the recession, government policy has attempted to move things in the opposite direction. So perhaps what the Prime Minister should have said is “Under Labour, inequality widened. With us, it’s narrowed, but we are doing what we can to change that.”

There are many other interesting results from the study, but let me mention just three here. The first is contained in the most right hand black dot. Over the period in which the coalition has been in power, changes in direct taxes and benefits have had no significant overall impact on incomes, compared to what would have happened if indexation had run its normal course. That means that the impact of benefit cuts in reducing the deficit has been almost exactly offset by tax cuts.

The second told me something I should have realised about the Treasury’s analysis of the distributional impact of budget measures. The Treasury’s analysis is similar, but with one important difference - the biggest losers in their figures are the top income decile. As the report shows, the main reason for this is straightforward - the Treasury analysis starts from January 2010, not (as in this report) from May 2010. Why does this make so much difference? Because the new higher 50p tax rate introduced by Labour actually started in April 2010. George Osborne subsequently reduced this to 45p. So the Treasury’s figures show the top decile losing as a result of the top tax rate going from 40p to 45p, while this study starts at the 50p the coalition inherited.

The third bit of the analysis I wanted to mention was how these numbers might change by 2019/20 under current plans. The broad picture remains similar, but with one large question mark for the lowest decile, concerning the introduction of the new Universal Credit (UC). One of the hopes for UC is that it will increase the uptake of benefits. The report calculates that if everyone who currently claims any one of the benefits UC replaces takes up UC, then UC will lead to large (+3%) overall gains for the bottom decile. Whether this will happen depends in part on the efficiency and manner in which it is introduced.