I thought I’d use the improved ONS website to try and answer a very specific and topical question. If UK GDP growth has been so good (OK, I’m exaggerating) over the last two years, and the economy is growing faster than the Eurozone and Japan, why are most people still worse off than before the recession? [1]

The first reason is straightforward. A large amount of the increase in GDP we have seen since 2007 is the result of there being more people in the UK. The chart below plots real GDP and real GDP per capita, where I’ve normalised the second series so it starts at the same point in 2007 Q1. [2] 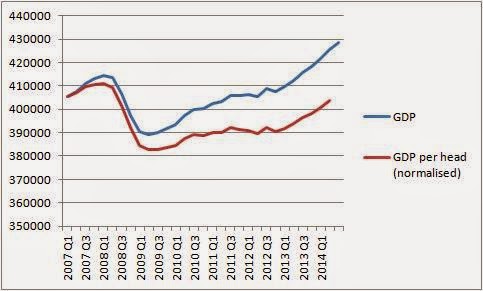 While the level of GDP in the second quarter of 2014 was well past its 2007 peak, the level of GDP per head was below that peak. GDP per head is a much better measure of how prosperous each individual person in the UK feels. (Incidentally, GDP per head in the US and Japan in 2013 exceeded 2007 levels. UK levels in 2013 relative to 2007 were similar to the Eurozone, but going up in the UK, down in the EZ.)

There are two other important differences between total GDP and how prosperous consumers feel. The first is how GDP is distributed between wages, profits and taxes. The chart below shows the shares of these three items (plus an ‘other’ category that includes self-employment income) over the same period. 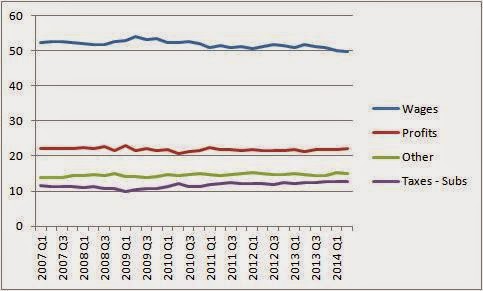 The top line is the share of ‘wages’ (compensation of employees) in GDP. Movements have not been dramatic, but this share is now lower than in 2007. A major reason for this is straightforward: higher indirect taxes. VAT was reduced in 2009, but restored in 2010, and raised again in 2011. Austerity has played a part in reducing real incomes. You might think another factor is changes in direct taxes and benefits, but as this recent post showed, cuts in taxes have largely offset cuts in benefits on average (but not for those in the lower quarter of the income distribution).

The second important factor is what economists call the terms of trade. We buy many overseas goods, so if their price has been rising relative to the price of goods produced in the UK, we will feel poorer. Here the major change occurred in 2008, with the large depreciation in sterling, although higher commodity prices will also have had an impact.

This leads to some data that is increasingly quoted in the media, which is the average earnings index relative to the consumer price index. People have been getting excited by the fact that the two measures are now growing at roughly the same rate, and when you look at the time series from 2007 to today you can see why. (The most recent ASHE survey from the ONS is rather less optimistic, with real earnings growth still falling.) 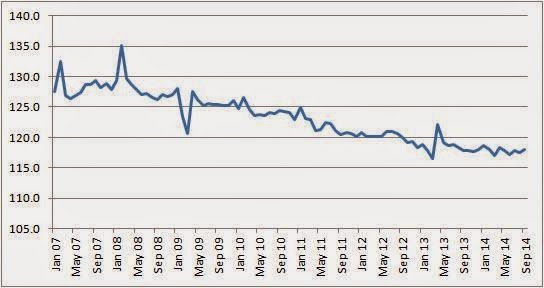 Real earnings were over 8% lower in 2014Q2 compared to their average in 2007. This overstates how much poorer we are on average for various reasons, but poorer we certainly are. Real disposable income per head was about 2.5% lower in 2013 than 2007. Consumption per head in 2013 was also substantially lower than in 2007, and also lower than it was in 2005 and 2006. [3] And if you think that was because 2007 was a debt fuelled consumer boom, think again. In fact, according to the latest data from the ONS, the savings ratio in 2013 was a little below its level in 2007.

So although GDP may be higher than before the recession, when we take account of the fact that there are more people in the UK, government takes more in indirect taxes, and import prices have risen much faster than the price of UK output, we end up significantly poorer.

[1] This post in complimentary to this interesting Chris Giles article in the FT.

[2] GDP is in £ million, 2011 prices. If you type ‘ONS UK GDP per capita’ into Google, you go straight to the (new?) Economic Time Series page on the ONS site - just scroll down for these series. (Alternatively go to the ONS site, select ‘browse by theme - Economy’ and the link is at the bottom right.) Most of the data in this post can be found there. I do have a request though - can we have the index numbers for the average earnings data there too please, with annual and quarterly averages as well as monthly? More generally, anyone can derive percentage changes from a levels series, but you cannot do the reverse accurately.