In a recent post I argued that many of the Eurozone’s current problems stem from low nominal wage inflation in Germany before 2008. In that post I also noted that this could be justified if Germany had entered the Eurozone at an uncompetitive real exchange rate, but that I thought there was little evidence for this. I want here to expand on that point.

One area that I have worked on extensively in the past is what might be called the empirical analysis of equilibrium exchange rates. The term equilibrium is short for where the real exchange rate is heading over a five year or so time horizon. While predicting exchange rate movements from day to day is impossible, this is not the case over the longer term. It was for this reason that the UK Treasury asked me to analyse what an appropriate entry rate for Sterling might be if we had joined the Euro in 2003.

There are two ways of describing the approach I take in this analysis. The first is to calculate the exchange rate that will achieve ‘external balance’. As John Williamson repeatedly points out, external balance does not mean current account balance, but the current account that is consistent with medium term trends in domestic supply and demand. This is why the approach is equivalent to a second way of describing it, which is to apply the ideas of the ‘new open economy’ literature that now dominates open economy macro.

In a 1998 study with Rebecca Driver for the (now called) Peterson Institute (which contained a key contribution from John Williamson and Molly Mahar) we calculated equilibrium rates for 2000 for France in the range of 3.06-3.74 Fr/DM, and Italy 927-1133 Lire/DM. The actual entry cross rates were 3.35 Fr/DM and 990 Lire/DM, which is pretty close to the middle of those ranges. In other words, according to our analysis Germany did not enter at a significantly uncompetitive rate compared to these two major economies. 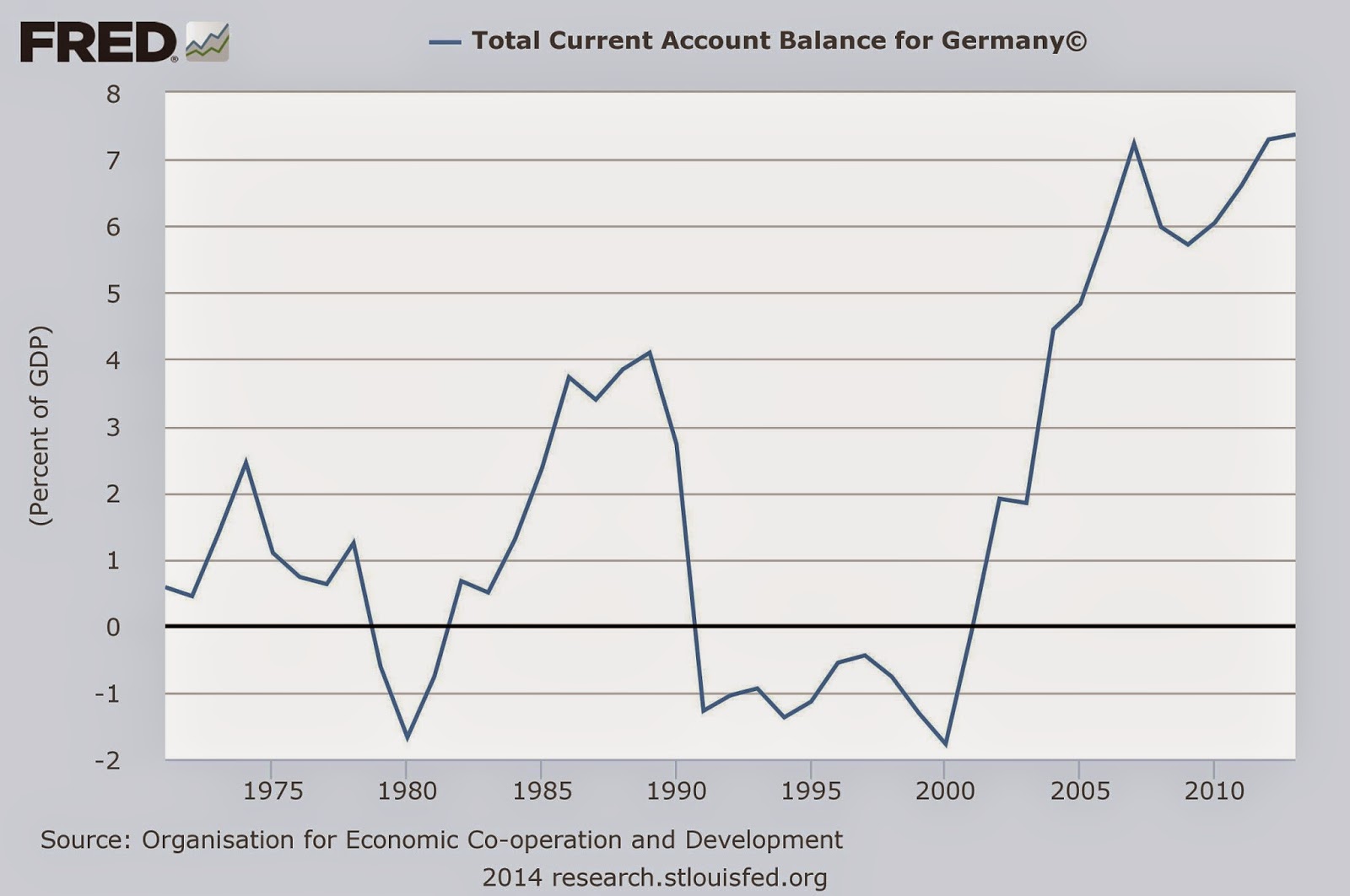 Germany’s current account in 2001 was in balance, and according to the OECD its output gap that year was a positive 0.7%. So Germany could only be uncompetitive on entry to the Eurozone if that current account balance was unduly influenced by one off factors, or that it really should have been running a structural surplus because of relative demographics or some other reason. But such structural surpluses are normally of the order of 1% or 2% of GDP. Looking at the current surplus of over 7% of GDP, you just have to conclude that Germany currently has a hugely undervalued real exchange rate, which is just another way of saying that it is too competitive compared to its Euro partners. It achieved that competitive advantage from 2000 to 2007.

So where did this idea that Germany entered at an overvalued (uncompetitive) exchange rate come from? I suspect it derives its force from what happened to German GDP growth after the Eurozone was created. As the chart below shows, Germany entered a recession in 2003. In addition, in 2003 foreign trade subtracted from growth. However in terms of the contribution of trade to growth this was a blip: both before and after export volumes grew faster than import volumes, reflecting the growing competitive advantage it was gaining through low nominal wage growth. (A ‘sustainable’ pattern would have domestic demand growing at the same rate as GDP, with a foreign contribution averaging zero.) So if we consider the period 2002 to 2004, for example, the recession was despite a positive contribution from trade, so trade can hardly have been a cause of it. The real reason for the depressed German economy was a decline in domestic demand, coming from both consumption and investment. 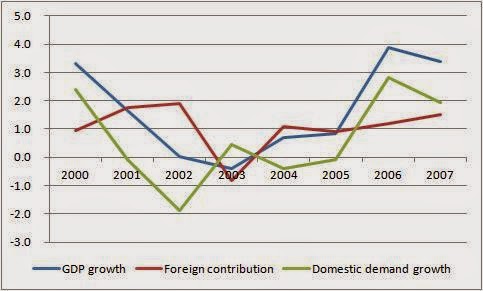 Whatever the reason for depressed domestic demand growth, it was not permanent, with healthy growth in 2006 and 2007. By that time, however, Germany had through low nominal wage growth gained a large competitive advantage compared to its Eurozone partners, which was the subject of my earlier post.

Germany’s undervalued real exchange rate - its competitive advantage compared to the rest of the Eurozone - cannot persist. It will be eroded by faster inflation in Germany relative to other Eurozone countries. The only question is whether this happens through a boom in Germany, or continued depression in the rest of the Eurozone. Yet failure to see the source of the problem as coming from Germany continues to mire the debate. There is endless discussion of the need for structural reform outside Germany that ‘must be part’ of any solution to the Eurozone’s current problem. Structural reform may or may not be desirable in many countries, and perhaps even Germany, but it has nothing to do with the need to raise the level of aggregate demand in the Eurozone as a whole. As far as competitiveness imbalances within the Eurozone are concerned, the problem is a result of a negative inflation shock in Germany. The natural place to look for a solution is not structural reform outside Germany, but a period of above target inflation within Germany, and it is in the interests of pretty well every Eurozone country other than Germany that this should happen.