Parliament should be able to vote on whether leaving the EU means destroying this legacy.

The story of how Mrs Thatcher helped in the creation of the Single Market is told by Helene Von Bismarck here. She believed it would be of great benefit to the UK, and she was right. Here is a nice chart from this CBR report I discussed in my last post. 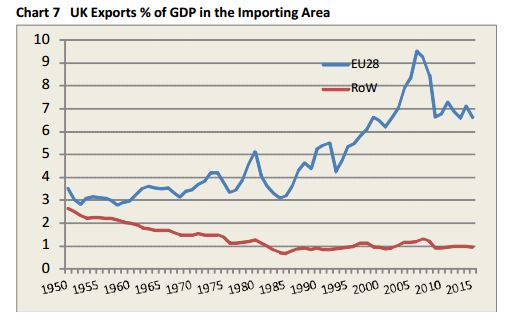 It shows the share of UK exports as a percentage of the GDP of the area exported to, for both the EU and the rest of the world. The rapid increase in the UK export share, doubling between 1990 and the beginning of the financial crisis, has to be largely down to the Single Market. [1]

But didn’t the CBR report say that the benefits of the Single Market had been exaggerated by the Treasury? Yes it did. Here is some of its reasoning. That growth in UK export share after the Single Market is not as impressive as it looks, because there is an underlying 6% 3.5% ** positive trend in the share relative to non-EU penetration, which you can detect before we joined the EU. That looks pretty on a picture, until you realise it is nonsense. A 6% 3.5% trend rise in an export share will imply that at some point not too far away UK exports to the EU will be as high as total EU GDP. UK exporters are just not that much better than exporters in other countries. There is no underlying trend rise in the UK’s export share.

As I say in The Independent, the rationale for going down the route of leaving the Single Market is completely wrongheaded. First, the Brexit vote was close - hardly a ringing endorsement for undoing Thatcher’s legacy. Second, all the evidence we have is that large numbers of Leave voters are not prepared to accept a reduction in their living standards as a price for reducing immigration, a reduction which is in the process of happening right now as a result of the collapse in Sterling. If you say we have no real evidence for this, show me your evidence that the referendum vote was a vote to leave the Single Market. If May really believes it when she says that the recent strength of the economy has convinced her that the costs of Brexit will not be that great, she is a fool. Third, the logic of saying that we cannot accept Single Market rules because we would have no say in what they are makes no sense because we will be worse off not accepting them. Once again, a majority of the country does not want to ‘take back control’ if it costs them money.

I say in The Independent that this is happening because May wants to finally show that she can bring down immigration, after 6 years trying and failing. It is also because she thinks she has to do this to keep her party together. But what Brexit means should not be up to the Prime Minister, particularly one who cannot be objective about immigration and who is a hostage to the Eurosceptic half of her party. The Single Market decision should be up to parliament. Leaving the Single Market was not on the referendum ballot paper, so it is not the ‘will of the people’. It does not follow automatically from the Leave decision, as many Leave campaigners correctly assured us before the vote.

Parliament should decide on whether we leave the Single Market as part of leaving the EU, not Theresa May. That is what living in a parliamentary democracy is all about. If the government denies MPs the chance to vote for leaving the EU but against leaving the Single Market, then that is effectively a coup against our democracy. MPs should block approval of invoking Article 50 until they get the opportunity to vote, in a way that is binding on the Prime Minister, to stay in the Single Market.

** I made a mistake in the original version of this post: corrected figures and clarifying text are in italics. For more details see this post

[1] The chart also casts doubt on the argument that being in the EU has held back UK exports to the rest of the world. This share was falling before we entered the EU, but has stabilised while we were a member.
Posted by Mainly Macro at 09:28