The French election and two-dimensional politics

Unless something very surprising happens, the French presidential election will be between Marine Le Pen of the Front National and François Fillon, who recently won the primaries for a collection of parties (essentially the right wing republican party). Fillon’s platform was extremely neoliberal. As Renee Buhr describes here:


This makes we worried that Le Pen will win.

If you see politics as all about a left/right axis, my concern makes no sense. Choosing someone whose economic policy is very much to the right of the centre/right parties should eat into Le Pen’s support, while those on the left will vote (reluctantly) for the lesser of the two right wing parties. However this one dimensional view is far too simplistic, and perhaps fatally so in this case.

To illustrate why, I want to briefly look at a piece by Jonathan Wheatley, which uses UK politics before the 2015 election. A sample were asked their views on 30 different policy issues. A technique was then used to find a pattern in the responses. The first interesting result was that the strongest pattern was two dimensional: there seem to be two common factors underlying these responses. To quote:


We could say the cultural dimension was about identity, varying from communitarian to cosmopolitan views. He then looks at the political party people supported. Here is the result: 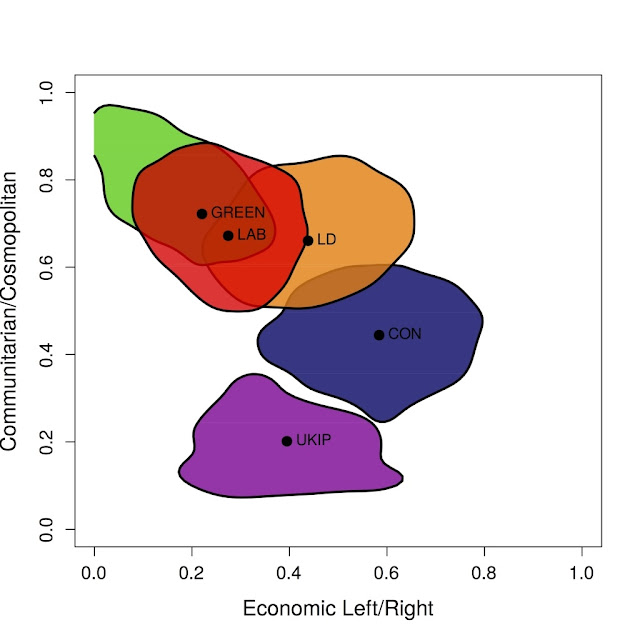 I know of no similar analysis that looks at French voters, but this does not matter for the point I want to make. Suppose we use the same diagram to represent a political party's policy position. In that case the area occupied by UKIP in the diagram above does seem to correspond to Front National policies. Their position on the identity axis is certainly well to the south of other parties, but their position on economic issues is far from neoliberal. In choosing who to vote for, the voter will position themselves on the diagram, and look for the party that is closer to them in this two dimensional space. (Of course we cannot use the diagram to actually measure distance, as the implicit weighting between the two aspects is arbitrary, and may not correspond to that of the voter. But the conceptual argument still works.)

From this two dimensional perspective, choosing a candidate to oppose Le Pen who is pretty right win in economic terms does nothing to capture Front National voters. But more seriously, it risks losing the support of left wing voters. While they may dislike Le Pen because of her stance on immigration and other identity issues, Le Pen is more acceptable in terms of economic policies than a very neoliberal candidate.