During the arguments over austerity, its supporters would often point to 1976 as evidence that it was possible for a country with its own currency to have a debt funding crisis. At the time this was frustrating for me, because I had been a very junior economist in the Treasury at the time, and my dim recollection was of an exchange rate crisis rather than a debt funding crisis. But I could not trust my memory and did not have time to do much research myself.

So with the publication of a new book by Richard Roberts on this exact subject (many thanks to Diane Coyle, whose FT review of the book is here), I thought it was time to revisit that episode combining Robert's comprehensive account with our current understanding of macroeconomic theory. I think any macroeconomist would find what happened in 1976 puzzling until they realised that senior policymakers did not have two key pieces of modern knowledge: the centrality of the Phillips curve, and an understanding of how the foreign exchange market works. 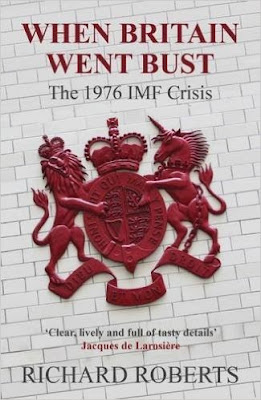 In terms of where the economy was, there is one crucial difference between 1976 and 2010. In the previous year of 1975 CPI inflation had reached a postwar peak of 24.2%. Although that peak owed a lot to a disastrous agreement with the unions, it probably also had a lot to do with the ‘Barber boom’ which had led to output being 6.5% above the level at which inflation would be stable in 1973 (using the OBR’s measure of the output gap). Although this output gap had disappeared by 1975 and 1976, inflation was still 16.5%. Given the lack of any kind of credible inflation target a period of negative output gaps would almost certainly be required to reduce inflation to reasonable levels.

The lack of understanding by senior policymakers of how the foreign exchange market worked was due to floating exchange rates being a novelty, Bretton Woods having broken down only 5 years earlier. We had a policy of ‘managed floating’, where policymakers thought the Bank of England could intervene in the FOREX markets to ‘smooth’ the trajectory of the exchange rate. My job at the time - forecasting the world economy - was a long way from where the action was, but my main recollection of the time comes from one of the periodic meetings of all the Treasury’s economists. It seemed as if the Treasury’s senior economists believed in the ‘cliff model’ of the exchange rate. The cliff theory suggests that if the rate moves significantly away from the target that the Bank was aiming at, it would collapse with no lower bound in sight. At the meeting I remember some more junior economists (but more senior than I) trying to explain ideas about fundamentals and Uncovered Interest Parity, but their seniors seemed unconvinced.

It is much easier to understand the 1976 crisis if you see it as a classic attempt to peg the currency when the markets wanted to depreciate it, and this is the main story Roberts tells.. The immediate need of the IMF money was to be able to repay a credit from the G10 central banks that had been used to support sterling. It is also true that sales of government debt had been weak, but Roberts describes this as stemming from a (correct) belief that rates on new debt were about to rise - a classic buyers strike. Although nominal interest rates at the time were at a record high, they were still at a similar level to inflation, implying real rates of around zero.

Here we get to the heart of the difference between 2010 and 1976. If there had been a strike of gilt buyers in 2010, the Bank of England would have simply increased its purchases of government debt through the QE programme, the whole aim of which was to keep long rates low. They could do this because inflation was low and showed no sign of rising. Contrast this with 1976, with inflation in double figures but real rates were near zero.

I think what would strike a macroeconomist even more about this period was the absence of the Phillips curve from the way policymakers thought. Take this extract from the famous Callaghan speech to the party conference that Peter Jay helped draft.

“We used to think that you could spend your way out of a recession and increase employment by cutting taxes and boosting government spending. I tell you with all candour that that option no longer exists, and so far as it ever did exist, it only worked on each occasion since the war by injecting a bigger dose of inflation into the economy, followed by a higher level of unemployment as the next step”


As a piece of text it only makes sense to modern ears if there is a missing sentence: that we failed to raise taxes and cut spending in a boom. Far from a denunciation of Keynesian countercyclical fiscal policy, it was an admission that politicians could not be trusted with operating such a policy, essentially because they imagined they could beat the Phillips curve using direct controls on prices and incomes. The fact that fiscal rather than (government controlled) interest rate policy was being used as the countercyclical instrument here was incidental.

Reading this book also confirmed to me how misleading the Friedman (1977) story of the Great Inflation was, at least applied to the UK. These were not policymakers trying the exploit a permanent inflation output trade-off, but policymakers trying to escape the discipline of any kind of Phillips curve. They were also policymakers who had not fully adjusted to a floating rate world, and the IMF crisis was superficially a failed attempt to manage the exchange rate. More fundamentally It was also a reaction by the markets to a government that was not doing enough to bring down an inflation rate that was way too high. The IMF loan was useful both as a means of paying back existing foreign currency loans, but also a means of getting fiscal policy and therefore demand to the level required to reduce inflation.

Although inflation fell steadily until 1979, another boom in 1978 together with rising oil prices reversed this, and through the winterof discontent helped elect Margaret Thatcher. Unfortunately the IMF crisis and the 1970s more generally is another example of the consequences of politicians, in this case particularly those on the left, not accepting basic lessons from economics.
Posted by Mainly Macro at 09:53