Miles on Haldane on Economics in Crises

Anything that says economics is in crisis always gets a lot of attention, particularly after Brexit (because economists are so pessimistic about its outcome), and Andy Haldane’s public comments were no exception. But former Monetary Policy Committee colleague David Miles has hit back, saying Haldane is wrong and economics is not in crisis. David is right, but (perhaps inevitably) he slightly overstates his case.

David Miles is also right that economists have not found it difficult to explain the basic story of the financial crisis from the tools that they already had at their disposal. Here I will tell again a story about an ESRC seminar held at the Bank of England about whether other subjects like the physical sciences could tell economists anything useful post-crisis. It was by invitation only, Andy Haldane was there throughout, and for some reason I was there and asked to give my impressions at the end. In the background document there was a picture a bit like this. 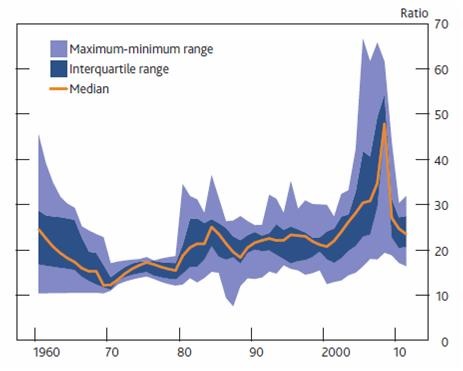 I made what I hope is a correct observation. Show most economists a version of this chart just before the crisis, and they would have become very concerned. Some might have had their concern reduced by assurances and stories about how new risk management techniques made the huge increase in leverage seen in the years just before the crisis perfectly safe, but I think most would not. In particular, many macroeconomists would have said what about systemic risk?

The problem before the financial crisis was that hardly anyone looked at this data. There is one institution that surely would have looked at this like this data, and that was the Bank of England. As Peter Doyle writes:

“ .. it was not “economics” that missed the GFC, but, dare I say it (and amongst some others), the Bank of England.”

If there is a discussion of the increase in bank leverage and the consequent risks to the economy in any Inflation Reports in 2006 and 2007 I missed it. I do not think we have been given a real account of why the Bank missed what was going on: who looked at the data, who discussed it etc. I think we should know, if only for history’s sake.

What I think David Miles could have said but didn’t is that macroeconomists were at fault in taking the financial sector for granted, and therefore typically not including key finance to real interactions in their models. [1] As a result, the crisis has inspired a wave of new research that tries to make up for that, but this involves using existing ideas and applying them to macroeconomic models. There has also been new work using new techniques that has tried to look at network effects, which Andy Haldane mentions here. Whether this work could be usefully applied much more widely, as he suggests, is not yet clear, and to say that until that happens there is a crisis in economics is just silly.

The failure to forecast that consumers after the Brexit vote would reduce their savings ratio is a typical kind of forecasting error. Would they have done this anyway, and if not what about the Brexit vote and its aftermath inspired it, we will probably never know for sure. This kind of mistake happens all the time in macro forecasting, which is why comparisons to weather forecasting and Michael Fish are not really apt. [2] That is what David Miles means by saying it is a non-event.

What is hardly ever said, so I make no apologies for doing so once more, is that macroeconomic theory has in some ways ‘had a good crisis’. Basic Keynesian macroeconomic theory says you don’t worry about borrowing in a recession because interest rates will not rise, and they have not. New Keynesian theory says creating loads of new money will not lead to runaway inflation and it has not. Above all else, macroeconomic theory and most evidence said that the turn to austerity in 2010 would delay or weaken the recovery and that is exactly what happened. As Paul Krugman often says, it is quite rare for macroeconomics to be so fundamentally tested, and it passed that test. We should be talking not about a phoney crisis in economics, but why policy makers today have ignored economics, and thereby lost their citizens' the equivalent of a lot of money.

[1] In the COMPACT model I built in the early 1990s, credit conditions played an important role in consumption decisions, reflecting the work of John Muellbauer. But as I set out here, proposals to continue the model and develop further financial/real linkages were rejected by economists and the ESRC because it was not a DSGE model.

[2] Weather forecasts for the next few days are more accurate than macro forecasts, although perhaps longer term forecasts are more comparable. But more fundamentally, while the weather is a highly complex system like the economy. It is made up of physical processes that are predictable in a way human behaviour will never be. As a result, I doubt that simply having more data will have much impact on the ability to forecast the economy.

[3] Total asset are the size of the bank's balance sheet. Shareholder claims are the part of those assets that belong to shareholder, and which therefore represent a cushion that can absorb losses without the bank facing bankruptcy. So at the peak of the financial crisis, banks had over 60 times as many assets as that cushion. That makes a bank very vulnerable to loss on those assets.