Austerity Confusion, or why the Tories are trapped by austerity

What do we mean by an end to austerity? There seem to be two meanings being used currently. The first, used by Conservative politicians in particular, is equivalent to what economists call fiscal consolidation: cutting spending (or raising taxes) in order to reduce the deficit (as a share of GDP). However when Labour say they will end austerity, I think they mean something even simpler: to stop (and reverse) cuts to government spending as a share of GDP.

The confusion has been compounded by two factors. First, Conservative Chancellors have mainly used cuts to spending rather than tax increases as part of their austerity programme. Second, they have also justified cuts to spending that were needed to finance tax cuts (corporation tax, inheritance tax etc) as austerity, which is a clearly not fiscal consolidation and is simply a reduction in the size of the state.

How do I know Labour do not mainly mean ending fiscal consolidation when they talk about ending austerity. Just look at their GE2017 manifesto. That involved various increases in current spending financed entirely by higher taxes (including corporation and inheritance taxes). This manifesto, which helped gain them such rapid popularity in the GE2017 campaign, was a proposal to increase the size of the state.

I explore in a shortcut piece for the London Review of Books how this ambiguity is a serious problem for the Conservatives. Even if they ended austerity completely (made no further attempts to reduce the deficit), Labour would be able to offer a much more attractive fiscal package to the voters because Labour are prepared to undo the tax cuts the Conservatives have made over the last seven years.

How do I know such a package would be attractive? Here I reproduce my favourite chart from the latest Social Attitudes survey that I talk about in the LRB piece. 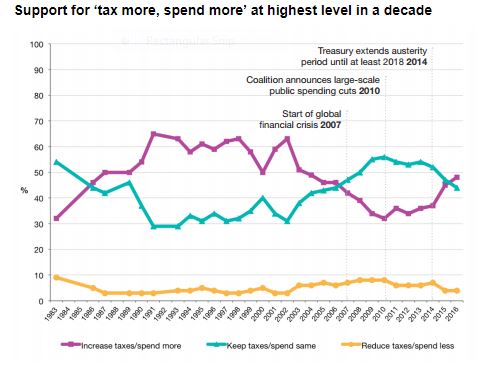 Why didn't this stop the Conservatives winning the 2015 General Election? Here is a YouGov poll that explains why. 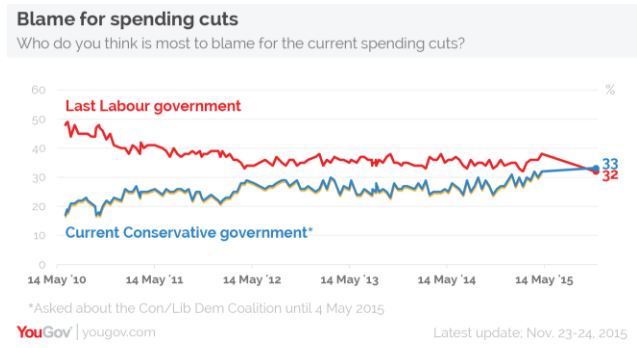 In 2015 more people blamed Labour that the Conservatives for spending cuts. This was translated into views about economic competence because the Conservatives, with the help of mediamacro, made reducing the deficit the key variable in judging economic policy. We are now in a period where this narrative still has an influence but it is no longer enough to win an election. The Conservatives dare not throw it away because many voters still believe it. They have become trapped by their own austerity policy and the reduction in the size of the state that went with it..