The UK slowdown is a result of Brexit and austerity

In the contest between economists and Brexiteers, which I last visited here, the score was 5:0 and Brexit supporters were already leaving the ground. But in that total I had not counted the 2017 Q1 GDP figure, because it could have been a statistical blip. We now have the first estimate of Q2 growth. I’m afraid the economists have scored again.

You may remember that Brexiteers made an awful lot of fuss when growth in the second half of 2016 was mediocre [1] rather than plain bad. We now know why that was: consumers were borrowing and running down savings. That is not a source of sustainable growth. Growth in the first half of 2017 (2017 H1) has been virtually non-existent. As this chart shows, we have not seen such slow growth since before the 2013 ‘recovery’ period. 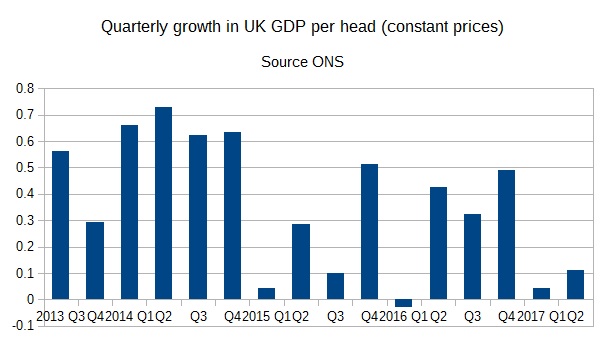 What is more, what little growth there was in 2017 H1 seems to be coming from consumption due to more borrowing, which is worrying for the future. (We will know more when the expenditure breakdown is released with the second estimate.) Those who argued that Brexit would bring a short term slowdown have been proved right: they just got their timing slightly wrong. Have all those who earlier lambasted forecasts of a short term Brexit slowdown offered their apologies? Pigs will fly.

Yet in his press release when the figures were announced, Labour’s Chancellor in waiting John McDonnell mentioned the government’s austerity policy but not Brexit. This is surprising, but how do we know whether austerity is to blame for this slowdown or Brexit?

The answer is both are to blame. After a pause, fiscal policy (to judge from the OECD’s estimate of the underlying primary balance) started taking demand out of the economy in 2015 and particularly 2016. That will have been an important factor behind the slow growth in both years. However the additional slowdown in the first half of 2017 is likely to be a Brexit phenomenon.

For those who say Brexit has not happened yet, the mechanism is clear. The Brexit depreciation immediately after the vote has led to a fall in real incomes, meaning less consumption. It has not led to any compensating increase in exports because firms are not going to expand markets that might soon disappear because of leaving the Single Market or customs union. The Brexit depreciation has brought forward some of the negative impacts of Brexit on living standards.

Yet austerity is still to blame in the following respect. The Brexit slowdown in 2017 H1 is a slowdown in demand, not supply. Monetary policy did what it could after the Brexit vote, but with interest rates at their lower bound it can do no more. (I trust there are some very embarrassed faces on the MPC right now among those suggesting a rate rise.) Fiscal policy should have helped monetary policy out by filling the demand gap, but those running the Treasury refuse to acknowledge this role for fiscal policy.

So McDonnell is correct to blame austerity, but his failure to also blame Brexit I’m afraid reflects darker political motives. The silence on Brexit as a cause of the current stagnation is because Labour, like the government, supports Brexit. No one wants to say that the Brexit vote is already causing considerable damage. Just like courtiers to a monarch, no one dares tell the king (the 52%) the bad news that their decision have brought harm in case the king takes his anger out on the messenger (the political parties).

[1] Growth in Q4 was just below historic trends, but growth in Q3 was way below. Hence mediocre.
Posted by Mainly Macro at 07:48