Measuring the impact of austerity

Ben Chu has a good article disposing of some of the nonsense ideas associated with austerity (which refuse to die, because they are useful to politicians, and much of the media is generally clueless). Perhaps the most silly, which I encounter a lot, is that the UK has not really endured austerity because debt has been increasing, or some other irrelevant measure has been rising.

If trying to reduce the deficit - what economists call fiscal consolidation - had no adverse effects on the economy as a whole it would not be called austerity. Austerity is all about the negative aggregate impact on output that a fiscal consolidation can have. As a result, the appropriate measure of austerity is a measure of that impact. So it is not the level of government spending or taxes that matter, but how they change.

An obvious measure to use is the change in the deficit itself, generally adjusted for changes that happen automatically because output is changing. I have used that measure many times, because it is produced by the OBR, IMF and OECD among others. But it is not ideal, because the impact of changes in taxes on demand and therefore output is generally smaller than the impact of a change in government spending, because some of any tax increase comes from reduced saving. (This is also true, but perhaps to a lesser extent, of government transfers.)

There is no simple way of dealing with this measurement problem, because the amount of any tax increase people will find from their savings will depend in part on how long they expect taxes to be higher. As a result, some people prefer to focus just on government spending to measure fiscal impact (although the data you will easily find is government consumption, and as fiscal consolidation normally involves cuts to government investment it is important to add that on). However it is also possible to apply some simple average propensities to consume from tax cuts and transfers to get a fiscal impact measure.

This is what the Hutchins Center fiscal impact measure does for the US. 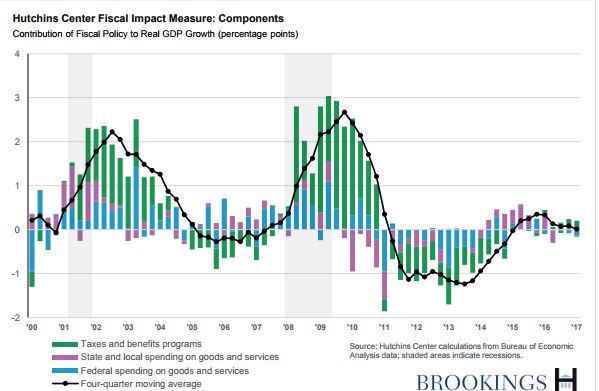 These are not multipliers (so are different from what the OBR does for the UK, for example [1]), but just the direct impact of government spending and taxes on aggregate demand and hence GDP. The average total impact is something like 0.4%, so this would be fiscal policy that was in this sense neutral.

In 2010, we had a much deeper and longer recession, but the fiscal support was only marginally greater than 2001, despite interest rates being stuck at their lower bound. On this occasion fiscal support was strongly opposed by the Republicans. It continued for another year and a quarter, and then became strongly contractionary from 2011 to 2015. GDP growth was slower than in the previous recovery, despite the deeper recession: from 2010 to 2014 2.5%, 1.6%, 2.2%, 1.7%, 2.4%. This is not surprising, as fiscal policy was reducing GDP by around 1% during 2011,2012 and 2013, rather than adding the normal 0.4%.

The speed and extent to which austerity was applied after the Great Recession was very unusual: the textbook says secure the recovery first, allow interest rates to rise, and then worry about government debt. There was no economic justification for switching to austerity so quickly after 2010: the motivation (as in the UK) was entirely political. It produced the slowest US recovery in output since WWII. (This is a very useful resource in comparing US upswings.) As I showed here using simple calculations, if total government spending from 2011 had remained neutral instead of becoming sharply contractionary, US output could easily have got close to capacity (as measured by the CBO) by 2013.

To subtract 1.5% from GDP would not matter if something (consumption, investment or net exports) filled its place. But that will only happen by chance or because of a monetary policy stimulus, and monetary policy was stuck in a liquidity trap. This is the real crime of austerity. Decreasing demand and output just when the economy is beginning its recovery from the deepest recession since WWII is as foolish as it sounds, but to do this at just the time that monetary policy was unable to effectively fight back is macroeconomic madness. As I will argue in later posts, it looks increasingly likely that this has made us all permanently poorer.

[1] If somebody publishes similar estimates for the UK, please let me know. Personally I think it makes more sense to publish data like this than use a multiplier based analysis, simply because these measures are more direct, and involve fewer ‘whole economy’ assumptions. Crucially, there are no implicit assumptions about monetary policy being made. It would be interesting to know why the OBR decided not to take this approach.