Why German wages need to rise

An interesting disagreement occurred this week between Martin Sandbu and the Economist, which prompted a subsequent letter from Philippe Legrain (see also Martin again here). The key issue is whether the German current account surplus, which has steadily risen from a small deficit in 2000 to a large surplus of over 8% of GDP, is a problem or more particularly a drag on global growth.

To assess whether the surplus is a problem, it is helpful to discuss a key reason why it arose. I have talked about this in detail many times before, and a similar story has been told by one of the five members of Germany’s Council of Economic Experts, Peter Bofinger. A short summary is that from the moment the Eurozone was born Germany allowed wages to increase at a level that was inconsistent with the EZ inflation target of ‘just below 2%’. We can see this clearly in the following chart. 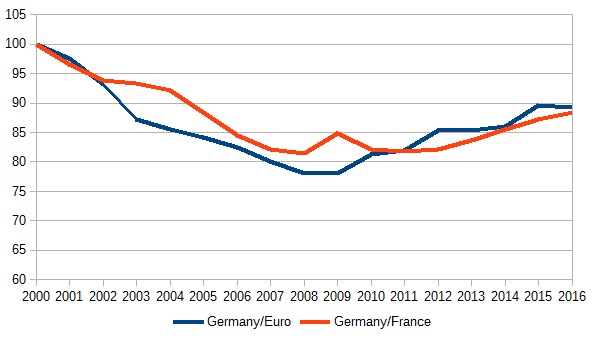 The blue line shows German unit labour costs relative to its competitors compared to the same for the Euro area average. Obviously Germany is part of that average, so this line reduces the extent of any competitiveness divergence between Germany and other union partners. By keeping wage inflation low from 2000 to 2009, Germany steadily gained a competitive advantage over other Eurozone countries.

At the time most people focused on the excessive inflation in the periphery. But as the red line shows, this was only half the story, because wage inflation was too low in Germany compared to everyone else. This growing competitive advantage was bound to lead to growing current account surpluses.

However that in itself is not enough to say there is a problem, for two related reasons. First, perhaps Germany entered the Eurozone at an uncompetitive exchange rate, so the chart above just shows a correction to that. Second, perhaps Germany needs to be this competitive because the private sector wants to save more than it invests and therefore to buy foreign assets.

There are good reasons, mainly to do with an ageing population, why the second point might be true. (If it was also true in 2000, the first point could also be true.) It makes sense on demographic grounds for Germany to run a current account surplus. The key issue is how big a surplus. Over 8% of GDP is huge, and I have always thought that it was much too big to simply represent the underlying preferences of German savers.

I’m glad to see the IMF agrees. It suggests that a current account surplus of between 2.5% to 5.5% represents a medium term equilibrium. That would suggest that the competitiveness correction that started in 2009 has still got some way to go. Why is it taking so long? This confuses some into believing that the 8% surplus must represent some kind of medium term equilibrium, because surely disequilibrium caused by price and wage rigidities should have unwound by now. The answer to that can also be found in an argument that I and others put forward a few years ago.

For this competitiveness imbalance to unwind, we need either high wage growth in Germany, low wage growth in the rest of the Eurozone, or both. Given how low inflation is on average in the Eurozone, getting below average wage inflation outside Germany is very difficult. The reluctance of firms to impose wage cuts, or workers to accept them, is well known. As a result, the unwinding of competitiveness imbalances in the Eurozone was always going to be slow if the Eurozone was still recovering from its fiscal and monetary policy induced recession and therefore Eurozone average inflation was low. [1]

In that sense German current account surpluses on their current scale are a symptom of two underlying problems: a successful attempt by Germany to undercut other Eurozone members before the GFC, and current low inflation in the Eurozone. To the extent that Germany can make up for their past mistakes by encouraging higher German wages (either directly, or indirectly through an expansionary fiscal policy) they should. Not only would that speed adjustment, but it would also discourage a culture within Germany that says it is generally legitimate to undercut other Eurozone members through low wage increases. [2]

From this perspective, does that mean that the current excess surpluses in Germany are a drag on global growth? Only in a very indirect way. If higher German wages, or the means used to achieve them, boosted demand and output in Germany then this would help global growth. (Remember that ECB interest rates are stuck at their lower bound, so there will be little monetary offset to any demand boost.) The important point is that this demand boost is not so that Germany can help out the world or other union members, but because Germany should do what it can to correct a problem of its own making.

[1] Resistance to nominal wage cuts becomes a much more powerful argument for a higher inflation target in a monetary union where asymmetries mean equilibrium exchange rates are likely to change over time.

[2] The rule in a currency union is very simple. Once we have achieved a competitiveness equilibrium, nominal wages should rise by 2% (the inflation target) more than underlying national productivity. I frequently get comments along the lines that setting wages lower than this improves the competitiveness of the Eurozone as a whole. This is incorrect, because if all union members moderate their wages in a similar fashion EZ inflation would fall, prompting a monetary stimulus to bring inflation back to 2% and wage inflation back to 2% plus productivity growth.
Posted by Mainly Macro at 08:42