The impact of austerity in the UK

When they do their forecast evaluation report, the OBR also look at the impact of fiscal policy on GDP. Here is the relevant chart from their report published yesterday. 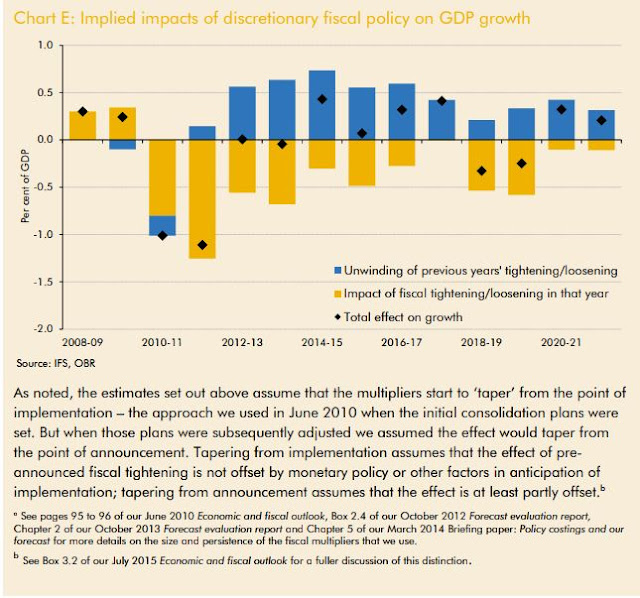 You can see when this matters from 2012 onwards. We have a run of years where the total impact of austerity on growth is zero or positive, but only because of the unwinding of previous austerity. If monetary policy, or anything else, had not been able to offset earlier fiscal tightening, then instead the impact of austerity would be to reduce growth in all those years. In that (extreme) case the level of GDP in 2016/17 would be over 4% below what it would otherwise have been without any fiscal tightening from 2010/11.

As the OBR’s assessment of fiscal impact is in their publication on forecast errors, they naturally talk about whether there is any relationship between the two. This year they included this chart. 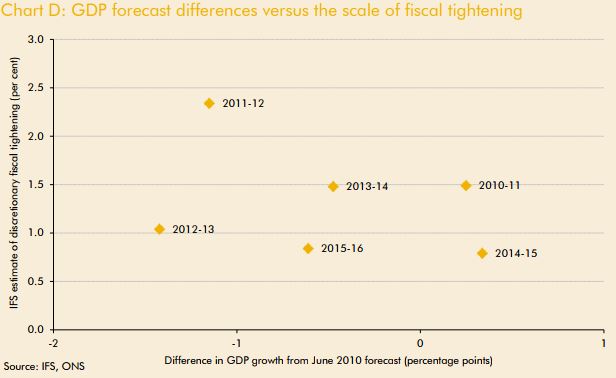 It is important to understand what we are looking at here. It is not whether there is a correlation between fiscal consolidation and GDP. As we have seen the OBR assumes there is, and indeed their calculations were the source of my estimate that the average household had by 2013 lost a total of £4,000 worth of resources as a result of austerity. The foolishness of austerity in 2010 was not that the OBR underestimated its impact, but that it left us vulnerable to negative shocks because interest rates were at their lower bound. The shock that hit in 2012 was the Euro crisis and the impact of austerity there.