Chris Giles had an article in the FT yesterday about the UK’s continuing dreadful productivity performance, and the implications this might have for forecasts of the public finances. It has the following chart comparing successive OBR forecasts and actual data. 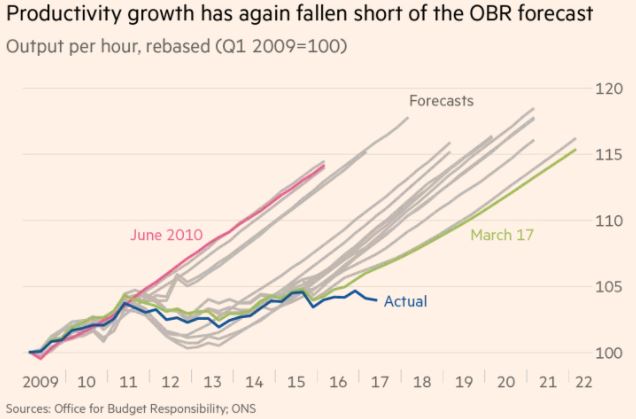 I want to make two points about this. The first is about the OBR’s forecast. [1] It is easy to say looking at this chart that the OBR has for a long time been foolishly optimistic about UK productivity growth. Too often growth was expected to return to its long run trend shortly after the forecast was published but it failed to do so. Expect lots of articles about how hopeless macro forecasts are in general, or perhaps how hopeless OBR forecasts are in particular. It was obvious, these articles might say, that trend productivity growth in the UK has taken a permanent hit following the financial crisis.

Anyone saying this is ignoring the history of the UK economy for the 50 years before the GFC. After each downturn or recession, labour productivity growth has initially fallen, but it has within a few years recovered to return to its underlying trend of around 2.25% per annum. This means not just returning to growth of 2.25%, but initially exceeding it as productivity caught up with the ground lost in the recession. In a boom sometimes growth exceeded this trend line, but it soon fell back towards it. 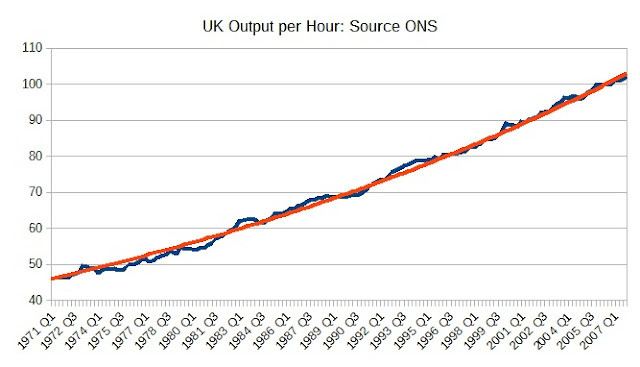 This made sense. Productivity growth reflects technical progress and innovation, and they tend to continue despite recessions. A firm may not be able to implement innovations during a recession, but once the recession is over experience suggests they make up for lost ground in terms of putting innovations into practice.

Given this experience, OBR forecasts have always been pretty pessimistic. They have assumed a return to trend growth, but no catch up to make up for lost ground. If they had also forecast, in 2014 say, that given recent experience they expected productivity growth to be almost flat for the next five years that would have been regarded as extreme at the time. Why would UK firms continue to ignore productivity enhancing innovations when the macroeconomic outlook looked reasonable?

And of course in 2014 UK productivity growth was positive. This brings me to my second point, which follows from this quote from the FT article:

“In the Budget, both the OBR and Mr Hammond are likely to stress that the downgraded forecasts do not reflect a new assessment of the damage to the UK economy from Brexit, but a reassessment of likely productivity growth after so many recent disappointments.”


Chris may be right that they will say this, but is it remotely plausible? As my recent post tried to suggest, UK productivity growth can be seen as suffering from three large shocks: the recession following the GFC, the absence of a normal recovery as a result of austerity, and then Brexit. The first two of those shocks led to a period of intense uncertainty, causing UK firms to put on hold any plans to innovate. Just as they thought things had returned to a subdued version of normal they were hit by the third, Brexit. During periods of intense uncertainty, productivity stalls or may even decline a little, as firms meet any increase in demand by increasing employment but not investing in new techniques. [2]

This story involving uncertainty seems to fit the data. Once the recovery (of sorts) finally began in 2013, productivity growth picked up. That sustained growth came to a halt when the Conservatives won the 2015 election, and the possibility of Brexit began to be an important factor for firms. [3]

These two points are related in the following way. The experience of the 50 years before the GFC suggested that you could hit the economy with pretty large hammers, but it would eventually bounce back. However that may have been contingent on a belief by firms that if policymakers were wielding the hammer (using high interest rates for example) they would take it away fairly soon, and replace it by stimulus. That belief was shattered in the UK by the GFC and austerity, where policymakers decided to keep using the hammer. What little confidence remained was destroyed by Brexit.

Discoveries are still be being made in universities around the world, and we know innovations are still being implemented by leading UK firms. It seems completely far fetched to imagine the GFC is still having some mysterious impact on the remainder of UK firms such that they refuse to adopt these innovations. A much more plausible story is that we are seeing what happens when most firms lose confidence in the ability of policymakers to manage the economy.

[1] I am on the OBR’s advisory panel, but as our job when we meet once a year is to be critical of OBR assumptions, and as we have no role in producing their forecasts, I think what I say here can be completely objective.

[2] Productivity can initially fall because new employees are not as productive as those who have been working in the firms for some time, for example.
Postscript (7/10/17) For evidence on the impact of Brexit on productivity, see work by Bloom and Mizen here.

[3] An alternative story is that the UK has settled into a new slow growth ‘equilibrium’, where the majority of firms are so pessimistic they hardly innovate at all.
Posted by Mainly Macro at 08:28