And a coda defends experts against Aditya Chakrabortty

A recent conversation got me thinking about different types of macroeconomic forecast error, and what implications they might have for macroeconomics. I’ll take three, from a UK perspective although the implications go well beyond. The errors are the financial crisis, the lack of a downturn immediately after Brexit, and flat UK productivity.

The immediate cause of the Global Financial Crisis (GFC) was the US housing market crash, but that alone should have caused some kind of downturn in the US, with limited implications for the rest of the world. What caused the GFC was the lack of resilience of banks around the world to a shock of this kind.

Were there any indications of this lack of resilience? Here is an OECD series for banking sector leverage in the UK: the ratio of bank assets to capital. The higher the number, the more fragile banks are becoming. 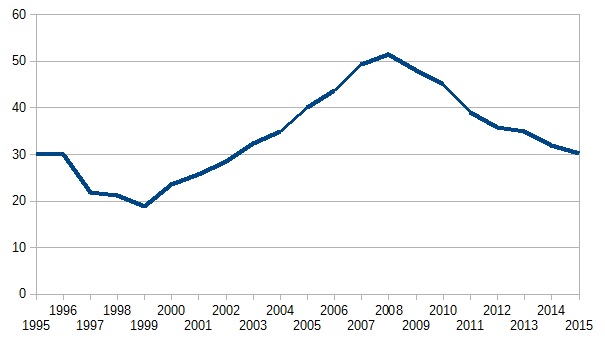 The first and perhaps most important problem with forecasting the financial crisis was that macro forecasters were not looking at data like this. For most it was not on their radar, because banks, let alone bank leverage, played no role in their models. It was a sin of omission, a big gap in our macro understanding. (Whether, if forecasters had been having to forecast this data, they would have predicted a crisis is improbable, but some would have at least noted it as an issue.)

Moving on to the second mistake, it is often said (correctly) that forecasters are very bad at predicting turning points or dramatic changes. But many did predict such a change immediately following the Brexit vote: a sharp and immediate slowdown in demand caused by the uncertainty of Brexit. It didn’t happen. The main reason was consumption, which held up by more than people were expecting, given the fall in real incomes that was likely to come from the Brexit depreciation. There are two and a half obvious explanations for this. First, because of Leave propaganda half the population thought Brexit would make them at least no worse off. Second, those who did anticipate the rise in import prices may have taken the opportunity to buy consumer durables made overseas to beat the prospective price increase. The half is that the Bank cut interest rates a bit.

None of these effects are very new. They may not have been incorporated into the forecasters’ models, but they could in principle have been incorporated using the forecaster’s judgement, although getting the quantification right would have been very difficult. In the end we got the slowdown, but delayed until the first half of this year, as Leavers began to face reality and the higher import prices came through, so it was an error of timing more than anything else (although it was apparently enough to make MP Liz Truss change her mind and support Brexit!). You could describe it as an unchallenging error, because it could easily be explained using existing ideas. It is the kind of error that forecasters make all the time, and which makes forecasting so inaccurate.

The third error was UK productivity, which I talked about at length here. Until the GFC, macro forecasters in the UK had not had to think about technical progress and how it became embodied in improvements in labour productivity, because the trend seemed remarkably stable. So when UK productivity growth appeared to come to a halt after the GFC, forecasters were largely in the dark. What many like the OBR did, which is to assume that previous trend growth would quickly resume, was not the extreme that some people suggest. It was instead a compromise between continuing no growth and reverting to the previous trend line, the second being what had happened in previous recessions.

My point of writing about this again is that I think this third error is much more like the GFC mistake than the post-Brexit vote mistake. In both cases something important that forecasters were used to taking for granted started behaving in a way that had not happened since WWII. Standard models were used to treating technical progress as an unpredictable random process. Now it is just possible that this is still the case, and the absence of technical progress in the UK and to a lesser extent elsewhere is just one of those things that will never be explained. But for the UK at least the coincidence with the GFC, austerity and now Brexit seems too great. As as I showed in the earlier post growth has not been exactly zero but has oscillated in a way that could be related to macro events.

If there is some connection, both in the UK and elsewhere, between the decline in economic productivity growth and macroeconomic developments, then this suggests an important missing element in macromodels. And like the financial sector, there is an existing body of research that economists can draw on, which is endogenous growth theory. There are examples of that happening already.

But I want to end with a plea. After the financial crisis too many people who should have know better said that failing to predict the financial crisis meant that all existing mainstream macroeconomics was flawed. It was rubbish, but such attitudes did not help when some of us were arguing against austerity on the basis of standard macroeconomic ideas and evidence. Now with UK productivity, we have Aditya Chakrabortty saying that experts at the OBR “are guilty of a similar un-realism and they have proven just as impervious to criticism” as people like Boris Johnson or Liam Fox. Not content with this nonsense, he says “This age of impossibilism is partly their creation”.

This is just wrong. Look at the elements of neoliberal overreach. Economists didn’t start calling for tight immigration controls and using immigrants as a scapegoat for almost everything. Most academic economists did not call for austerity. Almost all economists did not want to get rid of our trade agreements with the EU. Even if economists had warned about the financial crisis they would have been ignored because of the political power of finance. If all economists had thought productivity would continue flat we would have just had more austerity. [1] And in making this basic mistake, it is ironically Aditya Chakrabortty who has joined Michael Gove and other Brexiteers in having had enough of experts.