A comparison in accountability: Oxfam and the NHS

Although the original allegations in the Times looked weak, it turns out (from an interview with ex-employee Helen Evans by Channel4 News) that the leadership at Oxfam had not been giving the issue of exploitation by a tiny minority of its aid workers the attention it deserved. The deputy chief executive has resigned.

The original allegations concerned actions by some aid worker in Haiti some years ago. Oxfam took action at the time, and the charity has put in place various safeguards since. But nevertheless, it is important the media holds charities to account to ensure they do all they can to avoid this happening again.

But threatening to cut off all government funding is the last thing you should do. The message that sends to other charities is to hide any similar problems they come across in their own work, or worse still stop looking. Any responsible minister would have known that, but perhaps they wanted to get political points from their own side for being tough with a ‘leftie charity’. In none of the BBC coverage I saw (this story was the lead item on the BBC news I watched for four days running) were any questions raised about the government’s actions.

Contrast the behaviour of politicians and the media in relation to what is currently happening in the NHS. Quite simply people are dying because there are insufficient resources to cope with needs. Thousands have had operations postponed, leaving them in pain. Patients are lying in trolleys because there are not enough beds. Huge numbers, more than ever before, are having to wait for more than four hours in A&E.

The reason for all this is not mysterious. Health has been starved of resources by this and the previous coalition government like never before. I have shown the Kings Fund analysis in the past. Here is World Bank data up to 2014. The key point is that health spending as a share of GDP needs to rise to keep up with demand, but since 2010 the government has been shrinking the share of total output spent on health. The downward trend it shows until 2014 has continued and is projected to continue. 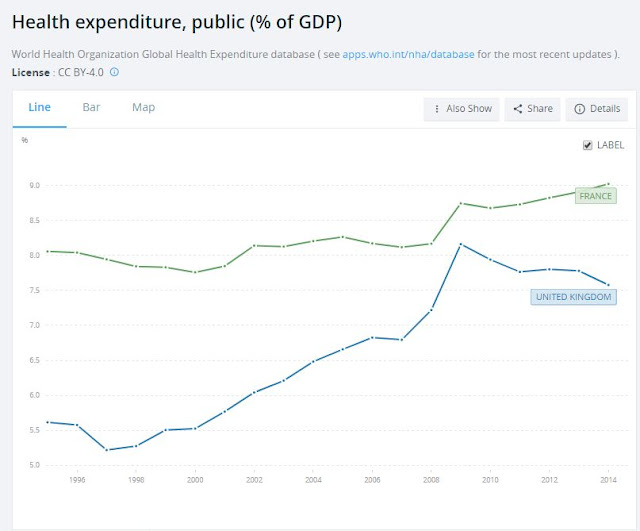 This shows neglect on a scale that make the leadership of Oxfam’s misdeeds look trivial. Yet where is the media scandal? The man who has been in charge of the NHS while this has happened and is happening in front of our noses is still in his job. The government continues to fail to provide the resources the NHS needs, while promising to protect the NHS, and yet it has not been held to account for killing people and leaving them in pain by the same media that has been happy to pursue the leadership of Oxfam. The Minister for International Development told the leaders of Oxfam that “an organisation’s moral leadership comes from individuals taking responsibility for their actions”. Quite.

The government are in denial about what is happening, and the media allow them to get away with it. Of course there have been countless reports about the crisis in the NHS, but we have not seen the kind of sustained and coordinated media focus on who is responsible that we saw with Oxfam. This is not about sexual exploitation in another country some years ago, but about people dying and in pain right here right now.

And incredibly, it is actually worse than this. The same politicians have attempted to use immigrants as a scapegoat for what is happening, whereas in fact immigrants provide more resources that could be used for health spending than they take out. Yet time and time again ministers can get away with this lie in the broadcast media. Worse still, one part of the government is busy preventing doctors the NHS desperately needs from coming to work here. And finally, I have never heard anyone in the broadcast media question why the government is starving the NHS of resources with such devastating effects. Its silence on the growing privatisation of NHS services is almost total, even though the vast majority of people do not want this.

This reminds me of the US election, where the media spent far too much time going on about Clinton’s emails and far too little time on Trump’s obvious unfitness to be a POTUS. But in this case there is no competing narrative, no two sides to balance. The media is simply failing to hold the government to account for allowing totally avoidable death and pain. This is what the UK has become in just seven years. A country that is happy to treat those who run charities as close to criminals, but shrugs its collective shoulders while the government destroys the NHS in front of our eyes.