UK productivity: too soon to get excited

UK productivity per hour increased by 0.9% in 2017Q3, and is estimated to have risen by 0.8% in 2017Q4. Numbers like that would not have caused much excitement before the financial crisis, but they sound great compare to what has happened since. However, if you put them in a graph you would quickly put the champagne back in the cellar. 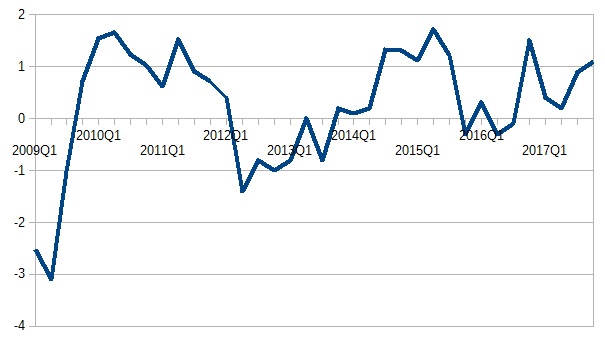 UK output per hour, % change on a year earlier

As I have suggested before, once you allow for the likelihood that productivity improvements depend on expectations of future demand growth (as you should), this graph is very easy to read. Productivity always falls in a demand led recession (2009) because firms are slow to lay off workers. However once output stops falling (2010,11) firms initially continue to lay off workers and then begin to invest in productivity improvements because they anticipate a recovery, which means we see strong productivity growth.

Does the recent growth at least suggest the Brexit shock is over? It is too soon to come to that conclusion. You would expect growing external demand and a tight labour market to encourage productivity growth, so maybe this is the first sign of that. But in the last two quarters it is a fall in hours rather than a fall in employment that is giving the growth, which may suggest the productivity improvement is temporary. It really is too soon to tell.

If my reading of UK productivity growth is correct, and I’m increasingly convinced it is, then the policy implications are dramatic. The austerity mistake did not just give us a temporary hit to demand and incomes, but has led to permanently lower productivity and therefore permanently lower output and incomes. Brexit started reducing productivity, and therefore output and incomes, before the vote even happened (as I suggested it would back in 2013). The costs of governments or voters ignoring what the majority of economists recommend is even greater than we imagined.