Decreasing the size of the state is very unpopular

I last talked about this question from the British Social Attitudes survey in 2014. Here is the latest version of this longstanding survey question (source and exact question here). 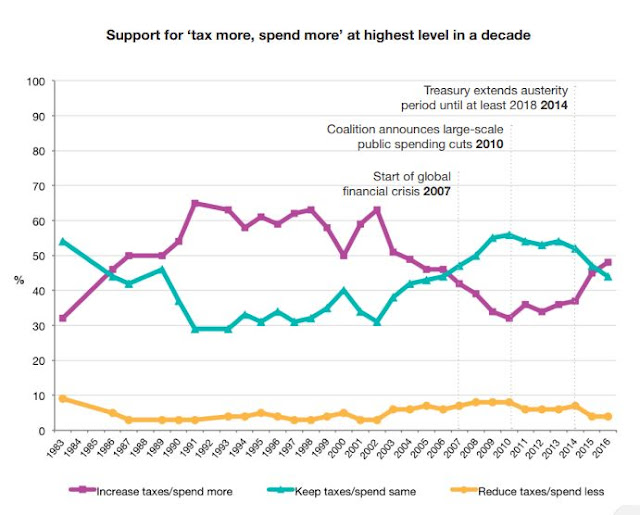 A point I made in the last post was that the percentage of people wanting lower taxes and less spending has always been less than 10%. If you believe the survey, and I see no reason not to, there has since 1983 been no public appetite for reducing government spending in order to cut taxes.

All the action over time is between those who want things to stay as they are, and those who want higher spending and taxes. As public spending has been cut in recent years, so the number of people wanting more spending and higher taxes has increased. However that proportion is still not up to the level it was in the 1990s.

Does this survey suggest that half the population want a larger state, and hardly anyone wants a smaller state? That depends on what you mean by the state. The question actually asks about spending on “health, education and social benefits”, so it seems reasonable that this is what people are responding to. They are taking as given that the government in the UK provides these things, and are simply expressing their view about whether they want more of these goods and are prepared to pay for them. The question does not ask about whether these goods should be produced by the state or by private contractors working for the state.

When the public are asked about who should own and run various activities, there is clear support for more rather than less public involvement. (Chart source.) 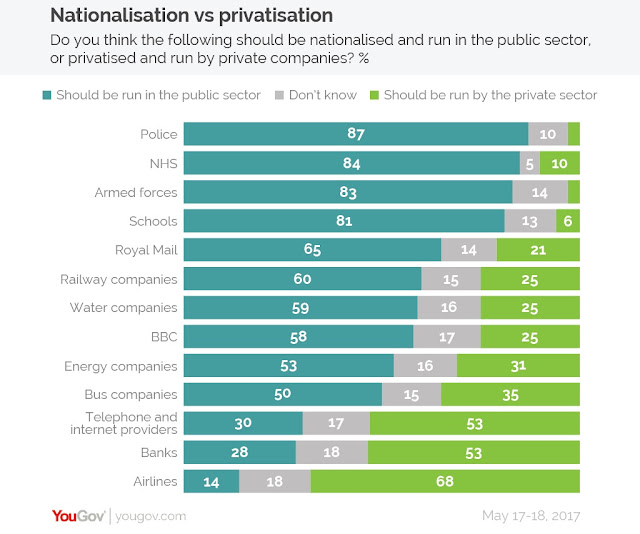 I remember being told how nervous the last Labour government was when they decided to raise NIC rates to fund an increase in NHS spending. They had committed to not raising the basic rate of income tax in order (they thought) to be able to win elections. Given the data above, you might wonder why. But then I remembered how the Labour PLP had decided that they had lost the 2015 election by being too left wing, again without any real evidence. Perhaps the lesson of these two poll results is that the gap between what people actually want and the received wisdom of the Westminster bubble is very large.