House prices and rents in the UK

I am not a housing expert, but it seems to me that the public debate is completely confused because it fails to make the distinction between house prices and rents. If we are talking about the supply and demand for housing, the price that equates those two things is rent, not house prices.

I discussed why here, but let me summarise the argument. Rent reflects the cost of being housed, of having a roof over your head. If there are less houses to go around, rents will be higher: higher enough to make some people share flats, live with parents or whatever. Because houses to buy can quickly change into houses to rent, there are not really separate markets for buying and renting, but just one big housing market.

The price of a house is the price of an asset. The asset in this case provides a roof over your head for as long as you own it. This means that house prices depend on current and future rents. Crucially, however, like any asset, the price is the discounted sum of future rents, where the discount rate is the real rate of interest. If real interest rates fall but future real rents stay unchanged, housing becomes a more attractive asset, and so wealthy people will buy more houses, pushing the price up.

Below is a chart of the ratio of house prices to rents in the UK and France, from OECD data. 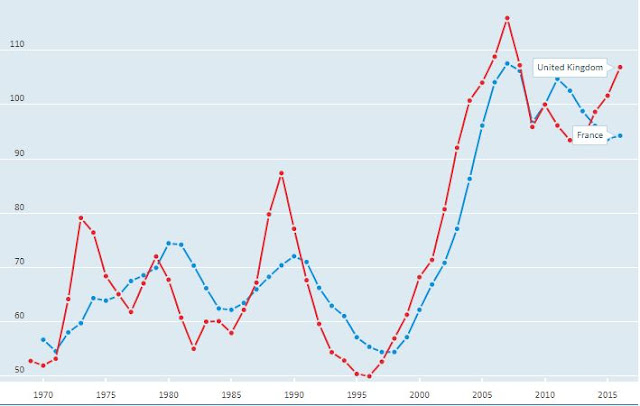 There are large swings, but no major trend before around 2000. (That may surprise people, but it reflects what has happened to rents which we will come to.) In the early years of this millenium the house price to rent ratio increased substantially in both countries, and has stayed higher. I have included France with the UK to suggest that there may be some common factor influencing their similar behaviour. [1] 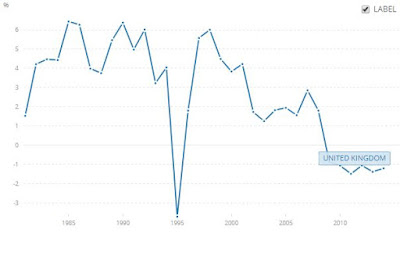 This will only be true if the housing market is liberalised so that this kind of arbitrage works, and that there are no taxes that stop the arbitrage happening. That was not the case in the UK before the 1980s (mortgages were rationed when I bought my first house), which is just one reason why you would not expect this relationship to hold over that period. But in the last two decades, lower returns on other assets has seen the rise of the middle class landlord as a way of saving for retirement.

Thus the rise in house prices in the UK and France since 2000 has got little to do with a lack of house building, a point that Ian Mulheirn has stressed. But what about rents, which is where we should look for any imbalances in supply and demand. Here is some IFS data from a recent paper by Robert Joyce, Matthew Mitchell and Agnes Norris Keiller. 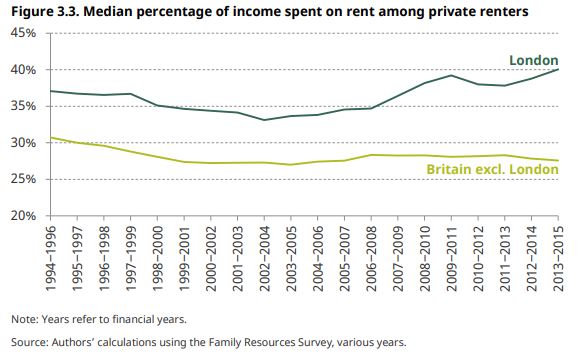 Outside London, there has not been a rise in the proportion of income spent on rent. Essentially, and I suspect this applies before the mid-90s, housing costs (rents) have risen with earnings rather than prices, and at constant real interest rates that would mean house prices rising with earnings. This represents a very reasonable return on any asset, and is why we think buying a house is a good investment. Now you could argue that we should build enough houses so that this proportion of income spent on housing falls, as it has for food for example. What you cannot argue is that building too few houses has anything to do with why houses have suddenly become unaffordable to young people.

The situation for rents has clearly been different in London in recent years, and London house prices have also risen much faster than elsewhere. David Miles and colleagues have written an interesting paper on how house prices in cities can rise as more people work in them but transport costs do not fall. In recent years UK governments have been trying to reduce the subsidy for train travel, and higher rents are a natural consequence. One way to reverse this is to invest in new and improved transport links into cities. However I think the main reason that house prices have recently risen in major cities in many countries is the decline in real interest rates noted above. (Here is the same debate in Vancouver.)

Does secular stagnation (low real interest rates) mean that a whole generation has to rent rather than buy? The main problem is the deposit that first time buyers have to find. Low real interest rates mean a mortgage is easier to service once you have one, although low rates of nominal earnings growth mean that it doesn't get so much easier over time as it used to. But rising prices means rising deposits, which if parents cannot help means saving for a long time. Banks do not want to take the risk of lower deposits, particularly if there is a real chance that house prices could fall. Help to Buy is about the state taking over the risk that Banks will not take, but is that something we collectively want to do? That is the debate we should be having in an age of secular stagnation. Building more houses may or may not be fine, but if real interest rates stay low it is not going to make houses affordable again for the generation that can no longer buy a home.

[1] It is fascinating to look at the countries that are similar to the UK and France, and those that are not (like the US and the Netherlands, but especially Germany). If anyone can tell me why these countries have not seen a permanent upward shift in house prices I would love to hear it.