The prize for the biggest piece of pure fantasy yesterday must go to the Chancellor when he said this: “Today, our goal is for Britain to become the most prosperous of any major economy in the world in the coming generation, with that prosperity widely shared across our country.” In terms of a key measure of our long term prosperity - output per hour worked - we were indeed catching up with the US, France and Germany until 2008, but since then we have lost ground as productivity growth has stagnated.

But the fantasy that was most on display yesterday in commentary about the budget was the idea that the budget deficit was or is our major problem. I watched Robert Peston go into great detail about just how large the budget deficit still was (how much we were borrowing every minute - that kind of thing). I saw Financial Times editor Tony Barber describe what a hole the UK was in when the Coalition came to power, because the deficit was 11% of GDP. [1] The implication in both cases is that these numbers are so large we have to immediately focus on bringing them down.

The hole I remember from 2010 and before was the Great Recession, which in turn was caused by a financial crisis. They really were major events, which had major impacts on people, and which therefore demanded an immediate policy response. The deficit exceeding 10% of GDP had no real impact whatsoever. Interest rates on government debt stayed well below the level of the previous ten years, and over time fell further.

Here is the growth in GDP per head and the public sector net borrowing to GDP ratio going back to 1985. In the early 1990s we had a small recession as we tried to stay in the European Exchange Rate Mechanism at an overvalued exchange rate. Public borrowing rose to 7% of GDP for two years. But the economy recovered rapidly following the 1992 depreciation and associated monetary policy easing, and the deficit came back down. In 2008/9 we had a much larger recession, and as a consequence the deficit ratio rose rather more. But the key point was that this rise in the deficit in both periods was largely a response to the decline in GDP, which helped moderate the recession, and not an immediate problem in itself. 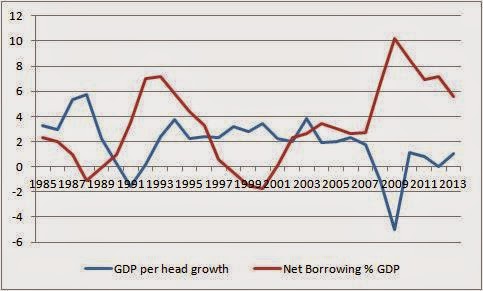 So the idea that in 2010 we were in a deep hole because of the deficit is just fantasy macroeconomics. It replaces something real (a financial crisis and deep recession) with something of little immediate consequence. The problem with living in a fantasy world but taking actions in the real world is that you make big mistakes, like starting fiscal austerity while still in a liquidity trap, which has made each UK adult and child on average at least £1,500 poorer.

For mediamacro, which inhabits the same fantasy world, it means you ignore the important issues. So we had everyone getting excited about the completely meaningless fact that the Chancellor had pencilled in an expansion in spending in 2019 and 2020. (Thank goodness for the OBR, whose use of the word 'rollercoaster' helped expose this circus.) As a result, comment largely ignored the problem of productivity stagnation, the absence of any expected growth in net trade, and more generally the persistence of macroeconomic imbalances that on earlier occasions the Chancellor had said it was vital to correct.

Martin Wolf, who thankfully is very much part of the real world, said the Chancellor had “made the best of what is, in truth, not that strong a hand”. [2] I think Martin is being too generous. The Chancellor asked us to enter a fantasy world, where the fact that living standards just might end up higher than when he came into office is regarded as a success, where employment growth that matches or exceeds output growth is regarded as a triumph, where finally achieving what are no more than average growth rates in GDP per capita during what should be a recovery phase is praised, and where reducing the deficit is all important. It is a shame that too many others seem happy to share this fantasy.

[2] Chris Giles, Sarah O’Connor and Vanessa Houlder at the FT have a nice graphical summary of key variables that backs this up.