Sticky wages both sides of the Atlantic

At the beginning of last year, there were many who were predicting a rise in UK interest rates in 2014. By then UK unemployment had been falling for many months, and we had had four quarters of solid growth. However I said that if rates did rise in 2014 it would be extraordinary. One of the reasons I gave was that there was absolutely no sign of any increase in nominal wage inflation. I thought it would be particularly odd if UK rates rose before US rates, given that the UK’s recovery was lagging a few years.

Unemployment continued to fall rapidly. By June 2014 even the Bank’s governor, Mark Carney, was giving indications that rates might rise sooner than some were expecting. US monetary policymakers showed no signs that they were about to raise rates, and I still thought they should be the first to move, but I was worried that the MPC was sounding too itchy. Sure enough in August two MPC members voted to raise rates. But wage inflation showed no signs of increasing.

Move forward to March 2015, and the prospect of rate increases seem to be receding on both sides of the Atlantic. On Wednesday the FOMC revised down their forecasts for inflation, and also revised down their estimate for the natural rate of unemployment. The reason is straightforward: despite continuing falls in unemployment, wage inflation refuses to budge. John Komlos argues that this state of affairs is unlikely to change anytime soon.

Much the same seems to be true in the UK, as this excellent account from Andy Haldane makes clear. In the UK there is an additional twist. To quote Haldane: “Back in 2009, the MPC’s judgement was that the benefits of cutting rates below 0.5% were probably outweighed by their costs, in terms of the negative impact on financial sector resilience and lending. With the financial sector now stronger, the MPC judges there may be greater scope to cut rates below 0.5%.” It now looks like the Zero Lower Bound (ZLB) may actually be zero.

Haldane goes through in great detail the possible reasons why wage inflation seems so sticky. Moving to the monetary policy implications, he talks about asymmetries, and many of the issues that I raised here he also raises. However he ends with something that I think is even more telling. The chart below shows an optimal interest rate path, using the Bank’s COMPASS model, and assuming a ZLB of zero. 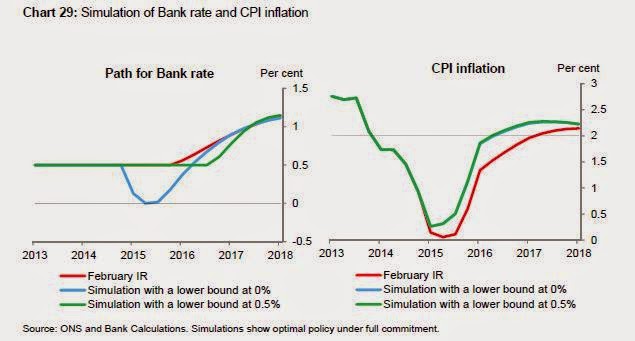 What it does is confirm a suspicion that both Tony Yates and I had about the MPC’s current stance. The policy of doing nothing, and waiting for the inflation rate to gradually converge towards 2%, does not look optimal even if the Bank’s forecast is completely correct.