Today it was announced that UK consumer price inflation hit zero in February. The ONS estimate that we have to go back to the 1960s for the last time this happened. More importantly, core inflation fell back 0.2% to 1.2%, after 0.1% increases in the previous two months. As Geoff Tily points out, if you take out the 0.2% contribution from the decision to raise student fees (which are hardly an indicator of excess demand), then the Governor could be writing a letter to the Chancellor based on core inflation, and not just the actual inflation rate.

The Chancellor is in election mode and so does not care: in fact he says zero inflation is good news, and he just hopes no one asks him why he chose to reaffirm a symmetrical 2% target. For the Bank of England it means the key question is now should they cut rates? As I noted here, optimal control exercises on the Bank’s model and forecast say they should, and I discussed here why there is an additional strong prudential case for doing so.

The point I want to make now is about survey evidence on capacity utilisation. I had a number of memorable meetings with various economists and officials at the Treasury, Bank and elsewhere when the Great Recession was at its height, but the one that left me most puzzled was with one of the more academic economists at the Bank of England. It was at about the time that core inflation started rising to above 2%, despite unemployment being very high and very little signs of a recovery. At much the same time survey measures of capacity utilisation were suggesting a strong recovery, completely at variance with the actual output data. The gist of our discussion was: what the hell is going on!? It was particularly puzzling for me, because I had many years before done a lot of work with survey data of this kind, and back then it seemed pretty reliable.

The problem with the 2010 period was that it was exceptional, and so in that sense it was not that surprising to see surprising things going on. My own pet theory at the time was that the financial crisis had made firms much more risk averse, which made them less likely to cut prices in an attempt to gain market share. Move on to today, and things are perhaps a bit less exceptional. What today’s figures emphasise is that the inflation ‘puzzle’ of 2010/11 has gone away. Levels of inflation are now much more consistent with substantial spare capacity in the economy. However the bizarre behaviour of the survey data has not disappeared.

Here is a nice chart from the ONS, comparing various different measures of spare capacity. 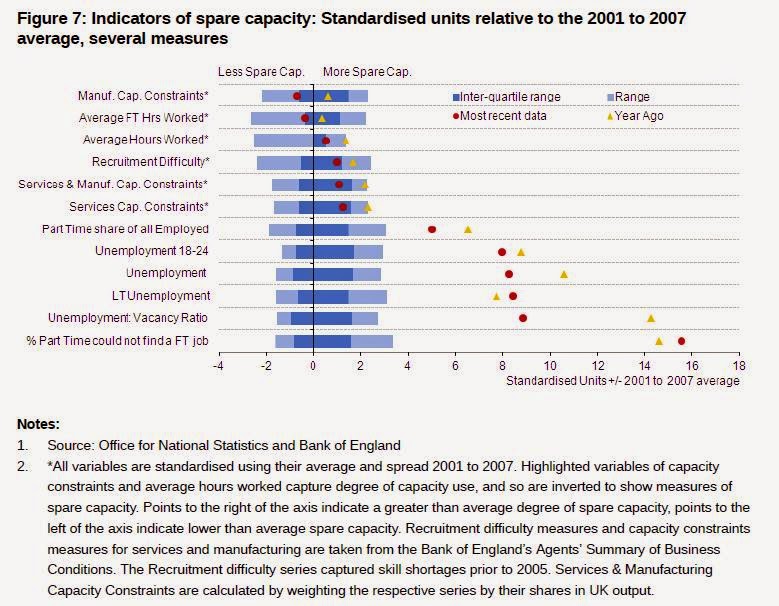 What it shows is that labour market indicators suggest an amount of spare capacity well outside the ‘normal’ range from the pre-recession years. In contrast, both hours worked and survey based indicators (the first six measures) suggest the output gap is quite small, and in one case actually positive. As this OBR paper shows, survey measures of capacity utilisation were suggesting a positive output gap as early as 2012.

Faced with this combination of spare capacity in the labour market and firms reporting its absence, a macroeconomist would suggest it could be a consequence of high real wages, encouraging substitution from labour to capital. Firms were fully utilising their capital – hence no spare capacity – but had hired less labour as a result. However a notable characteristic of this recession in the UK has been the high degree of labour market flexibility, with large falls in real wages. One of the more persuasive theories for the UK productivity puzzle, which I outlined here, is that we have seen factor substitution going in the other direction.

Back in 2010, I was reluctant to suggest the survey data were simply wrong, partly because of their past reliability but mainly because inflation was telling a similar story. On the day that inflation hits zero, I think the argument that these survey measures are not measuring what we used to think they measured has become much stronger. But that still leaves an unanswered question - why have they gone wrong, when they worked well in the past?
Posted by Mainly Macro at 16:22