I have a sense that Paul Krugman wrote this post out of exasperation with those who cherry pick data to draw incorrect conclusions about the importance of fiscal policy. I know the feeling. Here is my version of what Paul did, using OECD data. We take growth in government consumption (G) [x axis] and GDP [y axis] for a whole bunch of countries for each year from 2010 to 2013, and plot the two variables against each other. 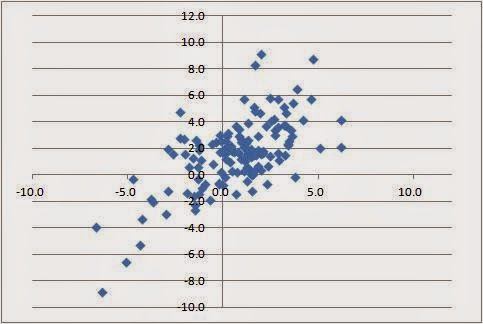 Paul’s point in that post was not that this positive correlation proves fiscal policy matters, but that there is a lot of variation, and so it will always be possible to find a case where G fell and GDP rose, or vice versa, but the general pattern is that the two variables are positively correlated.

I think that is as far as this should go. As Paul also said, you can quite legitimately argue that the relationship is not causal. Here is a very good argument about why it will not be. Imagine an ideal world where growth was always steady, and everything generally went according to plan, but some countries grew faster than others. If every country planned to keep the ratio of G to GDP constant, in the fast growing countries you would be likely to see high growth in both GDP and G, while in the others you would expect slower growth in both variables. What you would observe is lots of points close to a 45 degree line. This would tell you nothing about how a shock to G would influence Y. If you tried to read the 45 degree line as telling you about a G multiplier you would get implausibly large numbers.

This is not an academic point. Look at the three points involving 8% or more growth. They are for Estonia and Turkey. Growth in G in those cases happened to be quite low but positive, but no one would seriously suggest that this meant there was a huge multiplier in those countries. But these observations drag any trend line to be closer to 45 degree line. Indeed any trend line fitted to this data would come close to having that slope.

The other extreme numbers on the negative side are mainly Greece. Now there this reverse causation argument is less convincing: we know that negative growth in Greece did not cause the Greeks to reduce government spending. However the correlation there can still not be taken as causal because of another elementary econometric problem: omitted variables. Austerity did not just involve cuts in government consumption, but many other fiscal variables that will also have had a large impact on GDP.

All this is of course why people do proper econometrics on this question. Unfortunately the fact that there has been so much econometric work looking at multipliers itself creates a similar problem. Because difficulties involving omitted variables, simultaneity and other issues are difficult to solve, and because of different data sets, not all econometric work is going to come up with identical answers, and it will be possible to cherry pick among those as well.

One way of dealing with this problem is for new studies to start by replicated their predecessors where they can, as Jordà and Taylor do for example. (This is part of what David Hendry calls encompassing.) An alternative is to look at meta studies, like this recent example from Sebastian Gechert. To quote from his abstract: “We find that public spending multipliers are close to one and about 0.3 to 0.4 units larger than tax and transfer multipliers. Public investment multipliers are found to be even larger than those of spending in general by approximately 0.5 units.” Fortunately that is consistent with what theory might suggest. A subsequent meta analysis by Gechert and Rannenberg shows that multipliers are "systematically higher if the economy suffers a downturn", a result which is also key in Jordà and Taylor.

Despite the number of econometric studies already done, I'm sure there is plenty still to do. Sharp disagreements still exist that remain unresolved, although I suspect a lot will be sorted out when the monetary regime in place is adequately controlled for. Of course we have very few recent observations of the ‘Zero Lower Bound/QE’ regime. Leaving QE to one side, what basic New Keynesian models tell us is that multipliers observed under fixed exchange rates probably act as a lower bound for ZLB multipliers, which is why what has happened in the Eurozone periphery is of some relevance to the UK, US, Japan and Eurozone as a whole. We already know enough from both theory and evidence elsewhere to suggest that at the ZLB multipliers could be large, but just how large remains unclear. However I doubt our knowledge will be improved by drawing more scatter plots.
Posted by Mainly Macro at 08:54