How the media and politicians dumb down economics

I’m all for economists improving their communications skills, and there are some good initiatives currently around. But all that is as nothing when politicians and the media keep promoting bad economics.

What has happened in the UK since a year after austerity was imposed is that productivity, measured in terms of output per hour worked or output per worker, has hardly increased. Productivity normally rises in a recovery, and it began to until the middle of 2011, but we have seen almost no growth since then. That is terrible news, because it means that there has been no increase in average living standards: add in the Brexit depreciation and real wages have fallen substantially.

Yet politicians and newspapers continue to talk up employment growth as if it was a huge achievement. Here is the Mail from a few days ago. 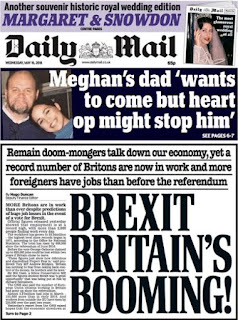 So many times I have heard government ministers counter criticisms over output growth performance by talking up employment growth, and I do not remember a single occasion where they have been pulled up with the obvious retort ‘so you are happy with stagnant productivity and falling real wages then’. [1] Because strong employment growth coupled with weak output growth means something is very wrong with productivity, and we cannot have sustained growth in real wages and living standards without productivity growth.

You might expect politicians to try and get away with nonsense economics if they can, and you would certainly expect right wing papers to turn reality upside down in an effort to protect their precious Brexit. That is why it is so important that political journalists working for the broadcast media know some basic economics, and are prepared to use it to call out the distortion of some politicians. Until they do, basic misunderstandings about simple economic relationships will persist.


[1] A BBC journalist did try once, and got into trouble as a result, as I relate here.