How to spot fraudulent economic arguments: an example from Lexit

When I last talked about Lexit, I said Lexiter arguments had “many structural similarities to right wing arguments for Brexit.” In this post I want to go further and suggest ways you can spot when economic arguments are fraudulent, using an article by Thomas Fazi and William Mitchell advocating Lexit as an example. To show how generic the tactics are, I will demonstrate how exactly the same techniques were used by those who argued for austerity.

The first sign that the wool is being pulled over your eyes is wildly exaggerating your opponents case. It is so much easier to attack a straw man. This particular article talks about the “Left’s anti-Brexit hysteria” i.e anyone who disagrees with us is acting hysterically. They talk about those opposing Brexit predicting “Brexit Armageddon”. The tactic works particularly well if you can find an example of someone who did exaggerate their case, and focus on how their fears have not come to pass.

I am very familiar with this tactic from the UK in 2013. From 2010 to 2012 growth was very low, and the expected recovery from the Great Recession did not materialise. People like myself blamed austerity, and we were quite right to do so. But some in 2012 made the foolish claim that the economy will never start growing again unless austerity came to an end. So when growth returned to trend in 2013, proponents of austerity used those claims to announce the critics were wrong and austerity had been vindicated. The example that Lexiters and Brexiters alike use is of course the Treasury short term post Brexit forecast.

That forecast was not about the longer term impact of Brexit, but uncertainty about the prospect of Brexit. It overestimated the immediate impact of Brexit. But the real question is not whether forecasts were wrong, but whether the Brexit announcement and subsequent uncertainty has damaged the UK economy. The article says the economy is still growing, and quotes some other selected statistics, implying all is fine. They do not mention that we have gone from the top to the bottom of the international growth league. Of course they cannot avoid acknowledging that sterling fell sharply on announcement. However they say but this has not destroyed the British economy: another straw man (who ever seriously said the depreciation would destroy the economy?!), and no mention of what the depreciation did do, which is cut the real incomes of workers. The debate over whether Brexit uncertainty has harmed the economy is over, as no one seriously thinks it has not.

A second sign of a fraudulent argument is to focus on a single study that supports what you want to say, and ignore all the rest. The Brexiters have Minford of course, but Lexit have the study by Coutts, Gudgin and Buchanan (CGB) published by the Centre for Business Research (CBR) at Cambridge. Those advocating austerity had two well known papers: one suggested there was empirical evidence that high government debt reduced growth, and the other that austerity was expansionary. In all these cases the studies are outliers, so you need some reason why the majority of academic work can be discredited.

This leads to a third tactic: tar academic work that goes against what you say with some broad assertions that have only a grain of truth. If your audience has a political bias, play to it. With austerity it was that those against austerity were old fashioned Keynesians who just wanted a larger state. (Some were, but most were just using a much more modern Keynesian framework and its macroeconomics implications.) The way this paper does the same with the many studies that have suggested Brexit will be harmful in the longer term is so laughable I have to quote it:

“The neoliberal biases built into these models include the assertion that markets are self-regulating and capable of delivering optimal outcomes so long as they are unhindered by government intervention; that “free trade” is unambiguously positive; that governments are financially constrained; that supply-side factors are much more important than demand-side ones; and that individuals base their decision on “rational expectations” about economic variables, among others. Many of the key assumptions used to construct these exercises bear no relation to reality.”


It will be news to most trade economists whose work is the basis of the long term case against Brexit that they are assuming things like governments being financially constrained and rational expectations. A key part of why Brexit is a bad idea is the gravity equation, which says trade is more likely to take place with neighbouring countries. It is a robust empirical relationship that makes no assumptions about governments or markets at all. [1] The article pours scorn on the ‘neoliberal’ idea that openness to trade is good for the economy, and again neglects to say that the relationship linking openness to productivity growth is also empirical, not theoretical.

Another tactic that if you see being employed you should start to worry is to impugn the motives of your opponents. That may be a common enough tactic in political discourse, but not if you are trying to make a serious economic argument. It is notable how academic economists who have criticised the Brexit work of Minford for example do not try and suggest he is ideologically motivated. Being good academics they instead question the model he uses (e.g. no gravity) and how he uses it. That is what should be done. But this article tries to discredit the current government’s analysis of the impact of Brexit by implying the results have been fiddled to produce large numbers for the long term costs of Brexit. They write:

“The models are notoriously unreliable and easily manipulated to achieve whatever outcome one desires. The British government has refused to release the technical aspects of their modeling, which suggests they do not want independent analysts examining their “black box” assumptions.”


Apparently the current UK government do not want us to see their workings because if we did we could see how they had fiddled results to make Brexit look bad. The attempt in this case is again laughable, because this government is pro-Brexit so any fiddling would go the other way.

All these four signs are easy to spot. The fifth is less obvious to the non-expert, which is to inconsistently use lots of broad brush statistics that do not get the heart of the issue, or which are problematic for other reasons. For example in arguing that Brexit has had as yet little impact on the economy they quote unemployment data, just as the government did from 2013 to argue that the economy was strong as a result of austerity. It is problematic because strong employment growth coupled with weak output growth means poor productivity. As I noted here, current productivity growth performance in the UK is worse than it has been for centuries.

In terms of broad brush statistics, they argue that GDP growth has been weaker rather than stronger than post-war trends as a result of EU membership, as if nothing else had been going on in all these years. The reality is that we joined the EU in part because our post-war growth and particularly productivity was worse than most other countries, and from the 1980s onwards it has if anything been better than other major countries. But why look at GDP rather than exports, where you would expect the impact of EU membership to be clearer. In fact the CGB study they quote from extensively does exactly this, and the following chart shows the results. 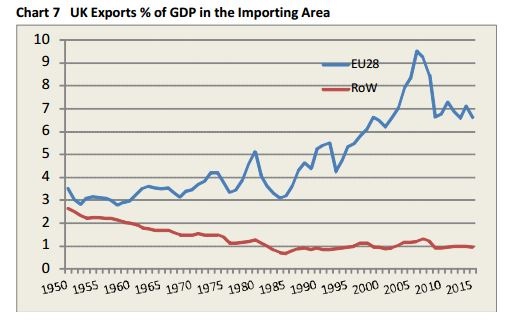 The benefits for UK exports of being in the single market are clear from this data. (To see how the CGB study erroneously avoids this conclusion, see here.)

There are of course plenty of Brexit specific points as well (the article does not even mention the Irish border), but this post is long enough already. I wrote it because it struck me when reading the Fazi and Mitchell article how similar its rhetorical devices were to those of many who tried to sell austerity. So if you read anything that wildly exaggerates the opposing position, focuses on a single academic study and ignores the rest, particularly if it suggests that there is some generic problem with these other studies which may include the motives of those who did them, and if it uses broad brush statistics when it could have used data that was more relevant, beware that you may be reading a piece of political persuasion rather than serious analysis.

[1] The confusion is compounded when they quote Paul Romer’s criticism of macroeconomics, and then drop the macro bit to pretend that Romer was talking about the whole of economics.