Nominal wages are not real wages, and why it matters in the UK


This post is just an extension of a recent tweet from Chris Dillow. I think it is worth writing more about it because it reflects on an issue that is widely misunderstood, by some on both the left and the right. Here is the share of employees compensation and corporate profits in total income since 1948. Note that everything below is about the UK experience: the US is different. 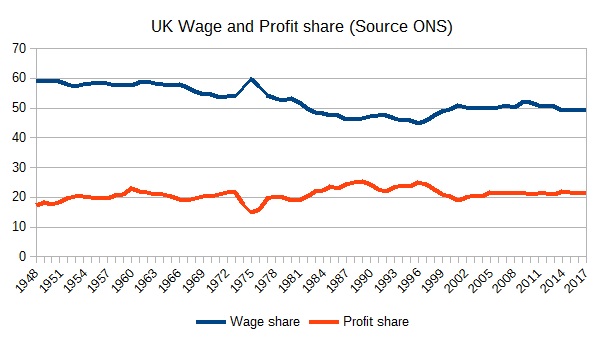 I have gone back to 1948 to show that the wage share can change, and has fallen from the 1950s until the end of the century, from 60% to 50%. But that has not been accompanied by a rise in the profit share, which has stayed pretty close to 20%. The missing pieces, that are the counterpart to the fall in the labour share over this period, are income going to indirect taxes, self employment and unincorporated businesses.

The key point I want to make is that neither the wage share or the profits share has changed over the last 15 years. This busts two myths that you will often see.

There was a large increase in non-EU immigration at the end of the 1990s: if anything the wage share increased at the same time. The second large increase in immigration, this time from the EU, was from 2004, and there was no noticeable impact on the labour share. Immigration may have been depressing nominal wages, but those lower nominal wages were allowing lower output prices, leaving real wages unchanged. This is consistent with the econometric evidence that immigration has no significant impact on real wages.

This evidence is often dismissed in two ways. The first is that it does not correspond to workers 'lived experience'. But that experience reflects either the impact of immigration on their own nominal wage, or falls in real wages which reflect the lack of productivity growth and sterling’s depreciation. It is just possible that immigration might have discouraged firms from investing in higher productivity techniques, but it is rather more likely that immigration has allowed firms to produce in the UK who would otherwise have produced abroad. For other reasons why intuition on immigration may be misleading see here.

The second way that some people argue that there ‘must be’ a link between real wages and immigration is to invoke simple supply and demand. That is just fallacious: immigration shifts the labour supply curve but it also shifts the demand curve. A slightly more sophisticated argument is that the demand curve does not fully shift to compensate for greater supply immediately after an increase in immigration because it takes time to invest, but if that was the case we would see a temporary fall in real wages and a rise in the profit share following periods of immigration, and we do not.

Myth 2: Real wages have fallen because labour is now weak compared to employers.

Since the Global Finance Crisis (GFC) and subsequent recession, nominal wage growth may be slow because the labour market is weak, but the data shows that employers are not taking advantage of this to increase the profit share. Low wages are being passed on into lower prices.

There are two main reasons why real wages are currently low: almost non-existent productivity growth since the crisis and the depreciation in sterling which has raised the cost of imports and therefore consumer prices.

Note that I am not at all saying that the labour market is not as weak as it appears. In many areas conditions of employment seem to have deteriorated since the GFC. What I am saying is that real wages depend on prices as well as nominal wages, and in the UK at least there seems to be sufficient pressure on firms to pass on low wages into low prices, leaving the relationship between real wages and productivity unchanged.

It is also important to point out that the wage share is different from median wages. As the study by Pessoa and Van Reenen I examine here shows, median wages from 1972 to 2010  declined relative to the average compensation because of rising non-wage benefits and rising inequality. A good part of this rising inequality reflects incomes of the top few percent.

It is often difficult to convince those on the left that weakening labour power over wages can be a good thing, if lower nominal wages are passed on to lower prices. It can be a good thing because it allows the central bank to raise demand and therefore output by more than they otherwise could while keeping inflation stable. It reduces the sustainable unemployment rate: the NAIRU. Furthermore lower wages are more likely to be fully passed on into lower prices if the goods market is highly competitive, and that is more likely to happen if the economy is open to overseas trade.