How the broadcast media created mediamacro

If you do not watch Carlos Maza’s short commentaries on the US media you should. Here is his latest, on why comparisons between the investigations into Nixon and Trump fall short. The reason, quite simply, is Fox News. With Nixon most Republican voters were getting their information straight from one of the established networks. As a result, Republican politicians were coming under Republican voter pressure to impeach Nixon when the extent of the cover-up became clear. Today, Republican voters get aggressive attacks on the investigations into Trump and his associates, attacks which are completely divorced from reality. And Republican politicians, reflecting the views of their base, repeat the attack lines from Fox News.

In the UK we have our equivalent of Fox News, but because our aggressively partisan media is the press there is a chance for the broadcast media to modify its impact. That it did not do so over Brexit because it failed to call out the lies of the Leave campaign is why the vote went the way it did. But Brexit was not the first time this happened. As some of the essays in a new book show, austerity was also an occasion where the broadcast media reinforced rather than countered the lies of the right wing press. 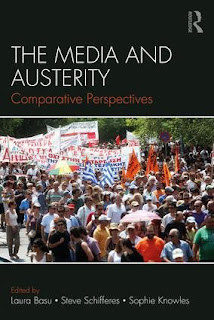 Laura Basu and Mike Berry show how virtual hysteria about the UK budget deficit was strongest in the right wing press, but as Mike Berry writes:

“Whilst BBC coverage lacked the strident editorialising seen in the press, it still operated within a framework which stressed the necessity of pre-emptive austerity to placate the financial markets.”


Historians will find this extraordinary. It is standard textbook macroeconomics that tells you not to try and counteract the deficits that arise when taxes fall and spending rises as output growth declines in a business cycle: that is why they are called automatic stabilisers. Keynes taught us and modern theory confirms you particularly do not do this when interest rates are stuck at their effective lower bound. It was natural to expect record deficits because it was a record recession and because conventional monetary policy was impotent.

So why did the BBC and other broadcasters largely ignore this point of view, and instead promoted what I call mediamacro? This is the subject of my own contribution, and here is a very brief and partial summary
There is a more conventional radical political economy point of view, which is set out in another essay by Aeron Davis. That is that the media, including the broadcast media, has a default position that supports an essentially neoliberal, financialised order. That position was disrupted by the financial crisis, but once that crisis had stabilised the media took the opportunity to return to where it was comfortable.

I do not think these two accounts are incompatible, as long as you do not see this political economy view as some kind of neoliberal conspiracy. Davis certainly does not see it that way. He describes, for example, why journalists often depend on City expertise: not because someone tells them that is what they have to do, but because they need readily available expertise that they themselves often lack. Try asking most academic economists to explain the latest retail sales data with virtually no notice. The fact that the expertise they receive is often presented as fact when the reason for market moves are generally unknowable is similar to the media’s attitude to macro forecasts.

We can make the same point about the role of central banks. There was no inevitability that they supported austerity, as the US experience under Ben Bernanke showed. Bernanke’s view made little difference in a highly polarised Congress, but I have often wondered whether a Bank of England warning of the dangers of austerity might have made a difference to the media’s coverage of austerity in the UK.

I was reminded of all this by the recent TUC march. After austerity we had the 2015 election, which I argued mediamacro won for the Conservatives. They did so by tending to affirm rather than critique the idea that the economy was ‘strong’, despite the fact that the data said quite clearly that it was in fact very weak. Once again we had a huge gulf between what workers and academic economists were saying and the message journalists were getting from City economists, and how journalists generally went with the latter. The BBC really needs to hold an inquiry into how they handle economics, similar to their inquiry into statistics, but I doubt it will happen under this government.